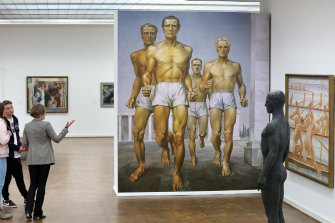 A 2017 show in Germany showed art promoted during the Nazi regime including the paintings “Turner” from Gerhard Keil, “Wassersport”.Credit:Picture Alliance/Getty

After the Tokyo Olympics, the boredom of the lockdown is set to move onto a whole new plane. Even without spectators, the Olympics has confirmed its status as the world’s supreme global spectacle, with the power to keep millions of people glued to the box day after day. What do we do now that it’s over?

Sport at its highest levels commands a huge popular audience, but great art is considered an elite preoccupation. From ancient times sports stadiums have been the playgrounds of the people, but art museums – a modern phenomenon that grew out of private collections – are seen as intimidating places. I remember reading about a British survey that found many working-class people viewed art galleries as “not for the likes of us”. 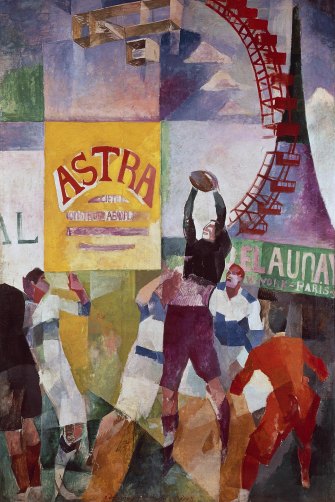 There are plenty of obvious reasons for the different reactions to art and sport. Nobody gets to roar approval, sing, eat or drink in an art gallery. It’s a reflective experience, closer to a church service than a football match. There’s also a feeling that understanding art requires a degree of specialised knowledge. In sport, success is easily recognised and quantified.

It may come as a surprise to learn that Baron Pierre de Coubertin, the founder of the modern Olympic Games, saw sport and the arts as equally important. The ancient Greeks had incorporated music and poetry contests into the Games and this is precisely what Coubertin proposed for the modern version. From 1912-48, medals were awarded for painting, sculpture, literature, music and architecture. The Baron even participated, albeit under a pseudonym, winning a gold medal for a poem, Ode au sport, at the 1912 Games in Stockholm. 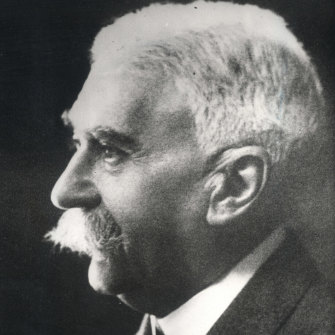 Baron Pierre de Coubertin, 1863-1937, who included artistic pursuits when he revived the Olympics.Credit:archives

The rule laid down by the International Olympic Committee specified that artworks must “bear a definite relationship to the Olympics concept”. This may sound vague enough, but in practice it produced work that now looks faintly embarrassing. A heroic feat in the sporting arena becomes mere kitsch when transmuted into painting or sculpture. Poetry and music became tub-thumping and anthemic. As artistic achievements are not measurable with a scoreboard or a stopwatch, there were numerous arguments about the judging process. In the Berlin Olympics of 1936, for instance, German artists dominated the medal tally.

Most well-known artists refused to participate in the Olympic contests, which were discontinued after the London Games of 1948. From that time onwards there have been plenty of supplementary exhibitions and events, but no more medals.

It may be that sport and art had lost any chance of equitable co-existence long before Coubertin’s grand gesture. In Ancient Greece, the two activities were united in the celebration of physical perfection but since then, the gap has been steadily widening. The iconic piece from that early period is Myron’s Discobolus (c.460-450 BC), which we know only from Roman copies of the original. The discus thrower is both a perfect physical specimen and a landmark in Greek Classical sculpture. Almost 2,500 years later it’s hard to think of another work that unites the worlds of sport and art so well.

Before the era of professional sports, the major ‘sporting’ themes artists pursued were to do with horses and hunting. Rubens’s wildly dramatic hunt pictures, such as The Wolf and Fox Hunt (1616), are among the supreme examples of the genre. 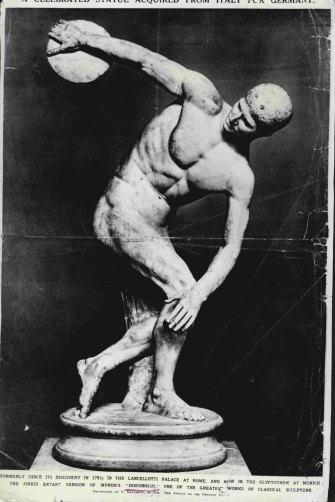 A reproduction of Myron’s ‘Discobolus’ one of the greatest works of classical sculpture. Credit: E. Kaupmany

The 19th century saw the beginning of many organised sports. The dawn of that century was the heyday of Romanticism, which laid a new emphasis on the individuality and temperament of the artist. At a time when sport was laying down rules, forming clubs and competitions, art was increasingly associated with a search for freedom.

By 1896, when the first of the modern Olympic Games was held in Athens, art and sport had been living separately for many years, regardless of Coubertin’s quixotic attempts to bring them together. The freedoms demanded by the Romantics had become completely non-negotiable for the Moderns, who saw themselves as revolutionaries. The doctrine of ‘art for art’s sake’, of which Whistler was the most voluble representative, made it impossible that works of art might serve as celebrations of sporting glory.

There are plenty of boats in Impressionist painting, but these are invariably images of leisure – the antithesis of competitive sport. Sport was shunned by the artistic avant-garde but found favour in the neo-classical art favoured by the dictators, who saw the athlete as a model of the strong disciplined, ideal body. Sportsmen were warriors, and the contest in the arena was a rehearsal for the ultimate contest on the battlefield.

The Nazis favoured paintings such as Gerhard Keil’s images of blonde gymnasts, or Albert Janesch’s Water Sports, hung in the Berlin Olympics art competition in 1936. It shows a race between four lanes of bare-chested rowers, as heavily muscled as any character from a super-hero comic. It was described by German critic Hubert Wilm as a “representation of the perfect beauty of a race steeled in battle and sport.” 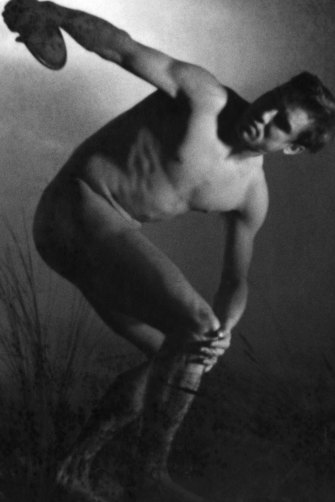 The style seemed to work better in the medium of film, as demonstrated by Leni Riefenstahl’s Olympia (1938), possibly the greatest sporting documentary ever made, although forever tarred by its association with Nazi ideology. What makes Olympia so controversial, even today, is not just its seductive beauty, but the suspicion that the nature of competitive sport lends itself to this disciplined, operatic style of filmmaking. Susan Sontag recognised Olympia as a masterpiece even as she tagged Riefenstahl as an unreconstructed exponent of “fascist aesthetics”. The alarming thought is that when it comes to sport, fascist aesthetics are a natural fit.

The Italian Futurists were rigorously avant-garde, obsessed with speed and war. Their leader, Filippo Marinetti, would become an enthusiastic Fascist. When Mussolini at Hitler’s urging passed laws discriminating against the Jews, Marinetti was quick to claim there were no Jews in Futurism. At first, the Fascists had been sympathetic to the movement, but despite Marinetti’s contortions and compromises, that sympathy gradually eroded. Nevertheless, the Futurists did create some memorable sporting images. Umberto Boccioni’s Dynamism of a Soccer Player (1913) is barely recognisable as a figure, but it’s a remarkable feat of abstract planes twisting and turning in upon themselves. 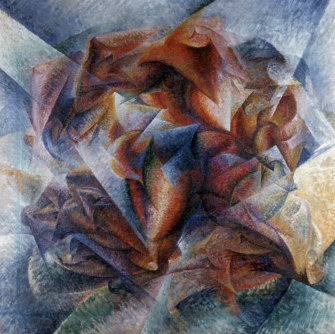 Images such as Boccioni’s soccer player would never have pleased an Olympics exhibition committee that favoured more academic styles. The Olympics echoed the tastes of the authoritarians, who believed art should be essentially celebratory in nature – celebratory of sport and, by implication, the regime behind the sporting hero. The name we usually give to such art is propaganda.

Allowing for a few exceptions, such as the dynamic sporting images of the Grosvenor School of printmakers; Robert Delaunay’s rugby pictures, notably, The Cardiff Team (1912-13); images of rope-jumpers and runners by Willi Baumeister, or Cubist-influenced paintings of boxers, horse racing and footballers by British artist, William Roberts (1895-1980), modern artists avoided sport as a theme.

Among artists working within styles that were officially approved by the tyrants, the best was probably the Soviet painter, Aleksandr Deyneka (1899-1969). In a career that encompassed the entire Stalinist era, Deyneka produced fresh, classical-style images of runners, footballers, skiers, divers, high-jumpers, baseball, polo and hockey players. The relative flatness of his work and the brightness of his palette, testified to modernist influences, but Deyneka’s heroic, patriotic subject matter allowed him to remain on the right side of acceptability. He has a good claim to be considered the leading sports artist of the 20th century.

Deyneka proves that when it comes to sport, an artist is well-served by classical restraint. It’s a lesson confirmed by a brief glance at the thousands of lurid, unspeakably awful examples of modern “sports” art found online. This torrent of kitsch is offset by the works of contemporary artists who use sport as a vehicle for social criticism or formal experimentation. But in co-opting sport to their own ends, contemporary artists are only reaffirming the historical disconnection between sport and art.

Sportsmen may use their public platform to make political statements, such as ‘taking the knee’ before a game, but in the heat of competition, the only things that count are winning, losing, and sportsmanship. The moral code of a sporting contest is to play by the rules and observe the ‘spirit’ of the game. This is where sport makes its decisive break with the studied provocations of contemporary art, a field in which the gold medals are reserved for those who break every rule in the book.

The Booklist is a weekly newsletter for book lovers from books editor Jason Steger. Get it delivered every Friday.