Prime Minister Scott Morrison is offering hope to tens of thousands of Australians stuck overseas they will be home by Christmas after premiers agreed to increase their hotel quarantine capacity.

The international arrival caps will be lifted in stages over the next three weeks, instead of adding 2000 extra places in one hit as Mr Morrison had wanted. 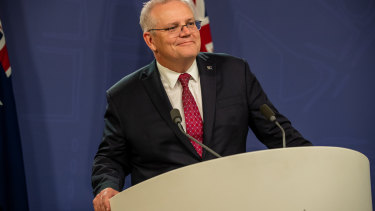 Prime Minister Scott Morrison’s ultimate aim is for the cap on international arrivals to be lifted entirely.Credit:Edwina Pickles

NSW and South Australia will increase their capacity in one go while Queensland and Western Australia will do it in two stages. Victoria remains closed to international arrivals as it battles a second wave of coronavirus infections.

Some 24,000 Australians have registered their intention with embassies to return home, although it is believed many more are seeking to do so. About 4000 of those stranded are classed as vulnerable.

Speaking after a national cabinet meeting on Friday, Mr Morrison said increasing the cap on arrivals should help those registered get home faster.

"By opening up these flights, we'll get more of them home sooner and to make sure they aren't bumped off flights because of issues of only business class seats are available, things like that," he said.

The Transport Department, which regulates air arrivals, says the number of passengers allowed on each flight under the increased levels will depend on how many flights come into a particular airport each day.

Mr Morrison's ultimate aim is for the cap on international arrivals to be lifted entirely.

It was imposed in July after flights into Melbourne were cancelled amid failures in Victoria's hotel quarantine system that led to a second wave of coronavirus cases in the state. Prior to that, there had been nearly 1800 people arriving in Melbourne from overseas each week.

WA Premier Mark McGowan said "recklessly doubling the number of arrivals into Western Australia overnight" was not the way to approach capacity problems, but he was comfortable with the agreed compromise.

Premiers were briefed by former commonwealth departmental boss Jane Halton on her review of the states’ hotel quarantine arrangements, which Mr Morrison said gave "a big tick" to NSW and was positive overall.

Mr Morrison remained open to using the Howard Springs camp near Darwin as a quarantine facility for commercial charter flights or emergency evacuations. Other charter flights could be taken to Tasmania or the ACT.

His government is also looking at allowing Australians returning from COVID-free areas of New Zealand to either skip quarantine or do it at home, freeing up hotel spots for others.

Mr Morrison pledged to re-examine the restrictions on Australian residents going overseas once the arrival caps were scrapped.

In August, 18,000 people were given an exemption to travel overseas on compassionate grounds or for business.

"I look forward to when we can have even less restrictions on those things. But we don't want to create a problem with the pipeline of people trying to get back in, so we need to address that problem first," Mr Morrison said.

Meanwhile, dogs and cats stranded overseas have also been thrown a lifeline, with the government allowing them to transit through Sydney to get to an animal quarantine facility in Melbourne. Qantas will ferry pets south while there are no direct international flights to Melbourne.

Get our Coronavirus Update newsletter for the day’s crucial developments at a glance, the numbers you need to know and what our readers are saying. Sign up to The Sydney Morning Herald’s newsletter here and The Age’s here.