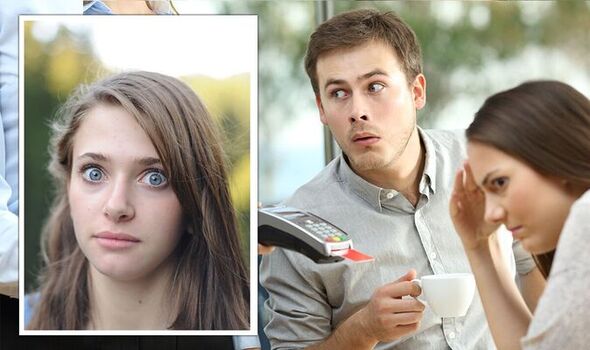 She recalled her “worst” date with “the very tall and gorgeous sailor who asked me out at a club”. The woman explained: “He arrived to pick me up and was terribly charming to my mum. I popped upstairs to get my bag and on returning found him showing my mum the newspaper clipping he carried around in his wallet.

“It was a picture of his perfect woman in a massive meringue wedding dress. Confused… that really seemed a bit too weird for me and I legged it out the back door. Mum said he waited half an hour for me to return before she kindly sent him on his way,” she said.

Another woman shared her experience and talked about the time she met a man at a pub, but “he came in 15 minutes late and was quite funny with me for not waiting outside”.

“I’d sent him a text saying precisely where I was sitting but he claimed he didn’t get it. Said I should have waited outside so he could have ‘walked me in’. I was already contemplating doing a runner by this point but thought best to stay and give it a try,” she said.

The woman explained she had never encountered such a negative person in her life. She said: “I knew he didn’t drive but it also emerged he lived with his mum at age 34 and didn’t work.

“Gets his money by giving a couple of music lessons a week. He kept talking about getting a job ‘that suits him’. He asked me a few questions but interrupted my answers straight away with his own anecdotes.”

However, the date got worst as he kept giving her “weird insulting” compliments. “‘You’re not a stupid girl by any stretch of the imagination’ being my favourite,” she said.

“Sneered at me for going to bed early and also for not owning my house (rich!). He ordered a huge Sunday meal, even though we’d agreed to a coffee and I stuck around instead of buggering off because I thought it’d be mean to leave him eating alone.

“He announced ‘I must admit, I’d really like to try your home cooking sometime soon. But it’d be quite a trek to get to yours from mine so you’d have to pick me up if that’s ok?’.”

In the end, the woman just wanted to “make a quick exit”. She continued: “Finally, to complete the humiliation, on the pavement outside, I knew he was going to go in for a kiss so I took a step back and he caught my arm and tried to pull me closer to him! I just said a firm ‘bye’ and blundered off feeling a bit shocked.”

Another forum user went on to share her most “awful” date with a man who took her to an Italian restaurant.

She explained: “All fine for the first 10 minutes or so and then he proceeded to plan my whole life out in front of my eyes.

“He said he owned a few houses and that I would be able to move into one of them with him in a couple of weeks when it was finished. How soon could we get engaged without it looking funny?

“He didn’t drive so I would have to be his chauffeur everywhere, would I mind that? He would pay me for it but then still get to be with him at the end of the night.

“Then decided he would want me to be pregnant as we got married, so I would come off the pill after that night, yes?

“Needless to say never contacted him again but he kept texting me. A few weeks after he texted me saying how he had met this amazing girl, does that make me jealous?!”

Another woman shared her bizarre experience with “a chap who whipped out one of those head massage thingies” during the date.

“The ones that look like a spider. He then proceeded to give me a very much unwanted and decidedly creepy head massage in the middle of a crowded Cafe Nero.

“I pretty hastily made my excuses after that and tried to make an immediate getaway but wasn’t quick thinking enough and he ended up following me to the tube station which was Leicester Square at 6pm on a Saturday night.

“There was a 20-minute queue just to get in. He was with me the whole way and there was no way of getting away from him… even followed me into the tube carriage and was jammed in next to me.

“He started stroking my arm next so as soon as the doors next opened I jumped out and ran off! Still, the best part of many dates has been the incredible sense of relief of disappearing into the tube at the end of it… alone.”