A woman has enacted a powerful method of revenge after receiving a disrespectful message from a match on a dating app – by exposing his behavior to his father.

Katie Pfeffer from Denver, Colorado, shared on Twitter what happened after a man named Lake messaged her through the dating app Hinge.

In the message, the man commented on one of her statements and called her ‘retarded’, which encouraged the woman to find his dad and inform the man about how his son was behaving. 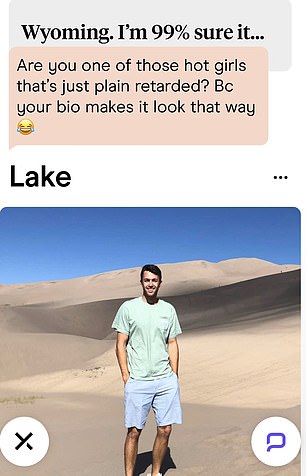 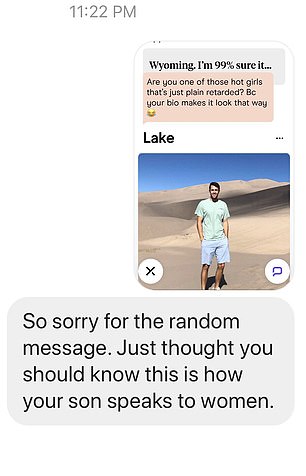 Revenge: A woman named Kate Pfeffer from Denver, Colorado, received a rude message on Hinge from a man named Lake, and she decided to share screenshots to his father (right)

Don’t underestimate: She shared the moment on Twitter, informing followers it took her only five minutes to find the man’s father

Further investigation: She later revealed how multiple women had bad experiences with the man, so Pfeffer informed his employer about the string of bad behavior

His message read: ‘Are you one of those hot girls that’s just plain retarded? Bc your bio makes it look that way.’

Pfeffer then took a screenshot of that message and was able to find Lake’s father on social media to then share it with him. 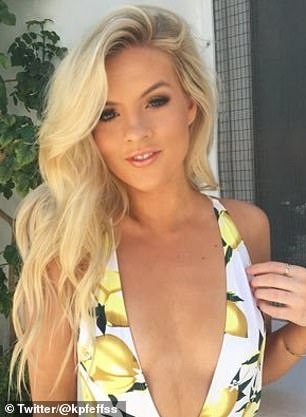 Getting back: The woman’s tweet quickly went viral with people impressed by her investigative skills

She sent the screenshot to the father with a message informing him of what his son was getting up to on dating apps.

‘So sorry for the random message,’ she began, adding: ‘Just thought you should know this is how your son speaks to women.’

The revenge was taken one step further with Pfeffer sharing both screenshots on Twitter so that other people could know about her ‘investigation skills’ when it comes to finding people online.

The tweet quickly went viral and garnered more than 240,000 likes in a matter of days.

Pfeffer then updated followers about Lake after she received more information detailing his treatment towards women from others who dated him.

‘@GeneralMills since posting this I’ve had four girls message me saying this man is abusive, manipulative and racist. I also found out he works as an intern for your company. If you’d like to know more please dm me,’ she wrote.

General Mills was tagged in the tweet because that is apparently where the man is currently employed as an intern. The company has yet to respond.

Commenters online were impressed with Pfeffer’s skills when it came to finding Lake’s father, with some imploring the FBI to ‘hire this girl’.

Other people thought this moment would teach singles to be more respectful on dating apps.

Another woman revealed she also matched with Lake on a dating app but received ‘weird vibes’ from him.

‘Holy shit I went on a date with this guy a couple of months ago and got weird vibes from him since he told me he was settling in here but “hadn’t found the right girl yet,”‘ she wrote.

Pfeffer has not shared any updates about the situation.