Would YOU date a shorter man? 5ft 8in woman asks if she’s ‘incredibly shallow’ to reject a Tinder match based on height – as others warn they could look like mother and son!

A woman who is preparing to meet h a man she matched with on Tinder has provoked a lively debate about whether height really matters when dating, ater admitting she’s nervous about him potentially being shorter than her.

Posting anonymously on Mumsnet, the UK-based woman explained she’s 5ft 8in and has always dated taller men, and asked if she’s ‘incredibly shallow’ to worry that a man she’s planning a socially-distanced date with might be shorter.

Adding that he doesn’t look tall in his photographs and a height difference could make their date awkward, she asked users of the forum if they would date a man who is shorter than them.

A stream of commetners admitted they wouldn’t go on a date with a man who is shorter than they are, saying that they just wouldn’t find them attractive, while another warned that a mismatch in height can make a couple look like mother and son. 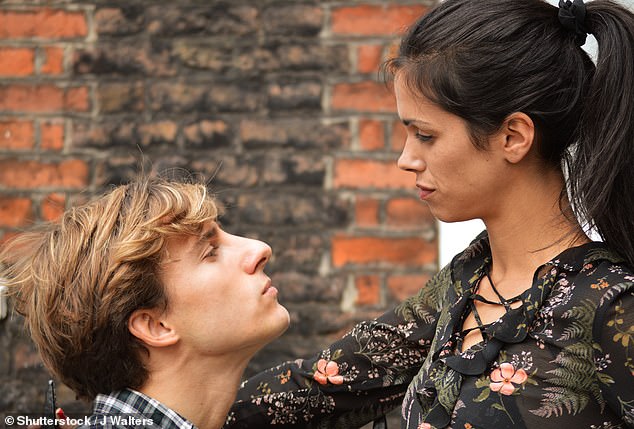 A woman who lives in the UK, has sparked a debate about dating a shorter man (file image)

Posting on Mumsnet, the woman explained she’s 5ft 8in and has always dated men who are taller than her

Explaining the dilemma, she wrote: ‘I’m going for a socially distanced walk next week with someone I met on Tinder and have been chatting to for a short while. (Yes it is allowed and he lives round the corner from me!).

‘Problem is I think he might be shorter than me! I’m about 5ft8 so not small. I’ve always dated tall men.

‘I’m not sure if it will bother me but I’m nervous it’ll be awkward! I haven’t asked how tall he is as don’t want to turn it in to a thing but he looks short in his social media photos.

‘Has anyone here ever been on a date with someone shorter? Am I incredibly shallow to worry about this?’

One person wrote: ‘No I wouldn’t. I’m the same height as you and I’ve only ever dated men 6ft and above. I don’t fancy short men’

‘No. I prefer them to be my height or taller. I once saw a couple where one of them was very tall and their partner was only up to their elbow. It looked like one was talking a child for a walk,’ another said.

A stream of responses admitted they always date men who are taller, with one explaining she felt uncomfortable to wear heels while dating a short man

A third added: ‘I dated a guy the same height as me (possibly slightly shorter) for two years. It’s personality more than anything. BUT, I never felt comfortable wearing heels, felt myself hunching sometimes and personally prefer someone taller. I realise these were my own issues. He never asked me NOT to wear heels etc, but if I did, I just felt like I was towering over him.’

Others argued height shouldn’t influence the woman’s decision about who to date.

One person wrote: ‘If the smaller guy was good looking and nice, wouldn’t be a problem for me. My husband is 5ft 6. When I met him, he had several girlfriends all a bit taller than him.

Another said: ‘Nope, doesn’t bother me at all. have dated smaller men and would do again if I wasn’t with my husband. I’d rather have a short man that treats me well and actively does 50:50 of all the housework and parenting than a tall man who “doesn’t see dirt” and who seems to think saying things like “Of course I’ll help, just ask” is doing his share.’