A young Australian woman has listed the bizarre – and realistic – reasons why she doesn’t want children in a lengthy TikTok video.

Maria, from Sydney, considered everything from possibly not liking her kids to an ‘apocalypse’ as well as the over expense of raising a family.

‘Reasons I will not be having children. Number one, and most importantly, I don’t want to,’ she admitted in the clip.

‘Number two, I don’t want to be pregnant. I don’t want my body to change, my organs are going to move, there’s going to be something stuck in there for nine months. 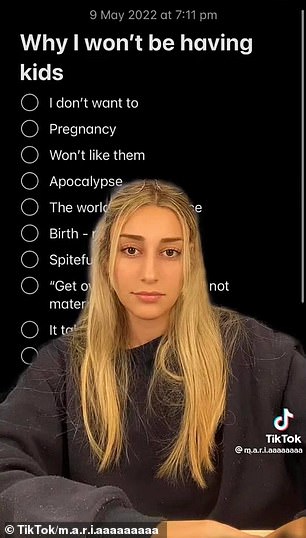 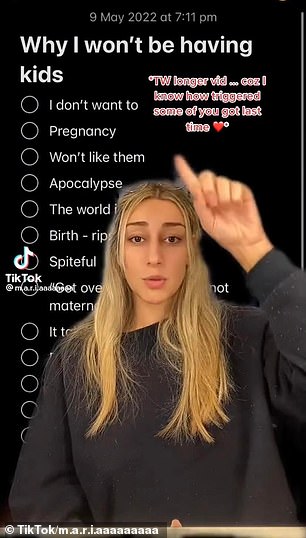 Sydney TikToker Maria (pictured) revealed the reason why she won’t be having kids. She considered everything from possibly not liking her kids to the ‘apocalypse’

‘Number three, what if I don’t like them? Kids are going to grow up, and have their own thoughts and opinions,’ she said.

‘What if they’re really annoying and I actually hate my child? What if they become an alpha male with a podcast? What do I do then?’

The fourth reason was the possibility of a future ‘apocalypse’ and the stress associated with trying to survive.

‘I always think about the worst things that can happen in the world and I’m already worried I’m going to have to look after myself and my family, I don’t want to add a kid to that list of stress,’ she said.

‘The world is in a bad place. Realistically, we could be left without food in the next 25 years. Do I want to worry about myself and a child? No.’

The thought of having to give birth was enough to deter Maria from wanting kids, dubbing it as ‘scary’ with a possibility of ‘death’.

She also described herself as ‘spiteful’ and ‘won’t change her mind’ to prove others wrong.

Maria said she’s satisfied being the ‘fun aunty’ to her sibling’s children rather than having offspring herself.

Other reasons included the ongoing expense, the changes to your body after pregnancy and the lack of freedom. 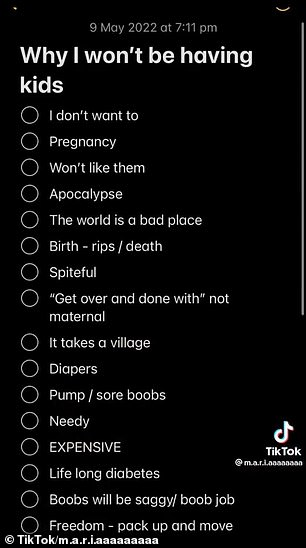 The long list (pictured)  included the ongoing expense, the changes to your body after having a child and the lack of freedom

‘I could just pack up and move to Europe tomorrow if I wanted to, I don’t have to think about anyone else but myself. If I have a child, I need to think about their thoughts and feelings. I don’t want to bare that responsibility,’ she said.

The long video has since gone viral exceeding more than 702,000 views, and several other women agreed with the statements made.

‘There’s literally not one single positive aspect to it,’ one woman wrote.

‘When I think about it, it’s crazy that women need to justify themselves for not wanting kids. Like men don’t need to justify. So why do we have to?!’ another added.

A third wrote: ‘Having a child in this economy is literally absurd.’

‘You forgot career. If we become mums then our career progression will either stall or end completely,’ another admitted.

Others also seemed conscious about the impact having kids will have on climate change.