A young mother who was homeless at sixteen and fell pregnant at the end of her first year of university has beaten the odds to graduate with a first-class degree.

Emily Hattersley, 23, was studying for her GCSEs when she found herself without a home – but continued her college studies while sofa-surfing with friends.

She put herself into care at the age of just 17 in order to complete her studies, and managed to get accepted to study Media and Communications at Cardiff University.

But at the end of her first year at university, Emily fell pregnant – and said her ‘whole life flashed before her eyes’ as she stared at the positive pregnancy test. 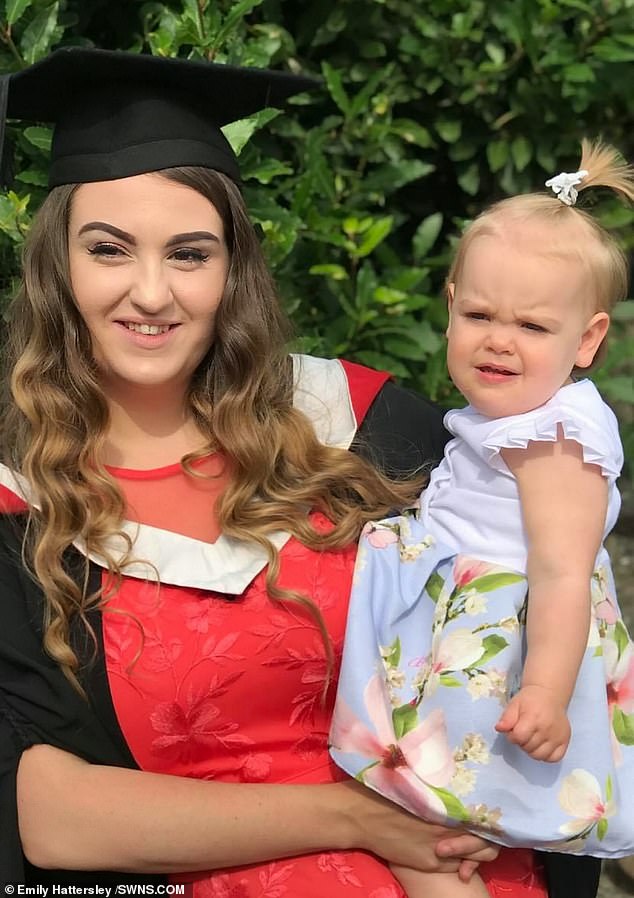 Emily Hattersley, 23, fell pregnant with her daughter Daisy, now one, while studying Media and Communications at Cardiff University (Pictured: Emily and Daisy at the graduation)

The young mother, from Rhondda Cynon Taf in south Wales, pushed on with her course, balancing studying for her second year exams with breastfeeding her daughter Daisy, now one.

Now, despite all the challenges she has faced in the past few years, Emily has graduated from Cardiff University with a First-class degree.

Emily, who lost her father when she was just nine, told The Cardiff Tab her success came down to her being a ‘very stubborn person’.

She said: ‘I had one thing in my mind the whole time. 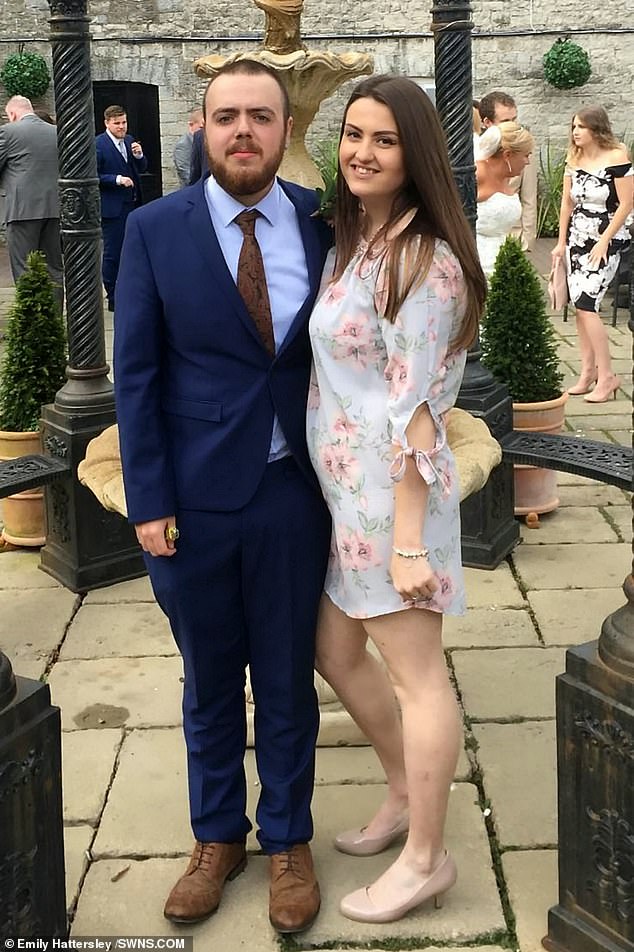 Emily, from Rhondda Cynon Taf in south Wales, had found herself without a home as a teenager but continued to study for her GCSEs while sofa-surfing with friends (Pictured with her partner Owen Gillard)

‘I had set myself a challenge and I was going to complete it, no matter how hard.’

Speaking about her difficult teen years, Emily revealed she was made homeless at 16 after she had undergone spinal surgery.

She said:  ‘My dad died when I was nine, and I was made homeless at 16, following my first spinal surgery.

‘During this time I also had to complete my GCSEs. Studying while being homeless came with its challenges.

‘Mental health issues left me with barely enough energy to attend college, which then further affected me mentally because I felt I wasn’t achieving anything, and was just in a stage of limbo. 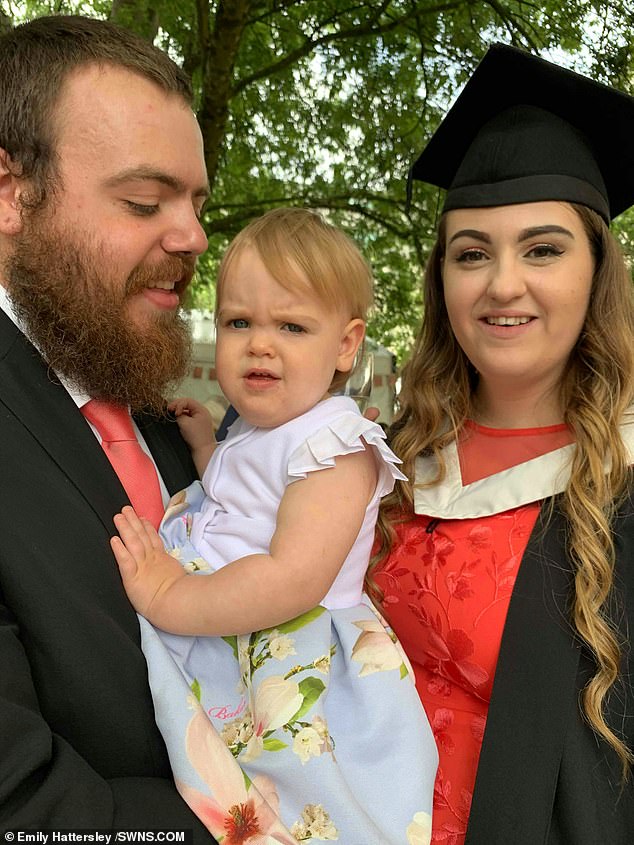 Emily put herself into care at the age of just 17 in order to complete her studies, and managed to get accepted to study Media and Communications at Cardiff University. Pictured: On her graduation day with her partner Owen and daughter Daisy

‘After a year of sofa-surfing at friend’s house, I decided that I would put myself into care. I felt I didn’t want to be a burden on them any longer.

‘I felt like it would be nice for someone to look after me for a change, so I could focus on my studies.’

But Emily found it difficult to be in care after being independent for so long – and at 17 she moved into her own flat, provided by social services.

‘At this time I had to learn how to take care of myself and how to budget,’ she said.

‘My flat was far away from anyone, and I very often didn’t have enough spare money to catch public transport to see my friends or my partner. 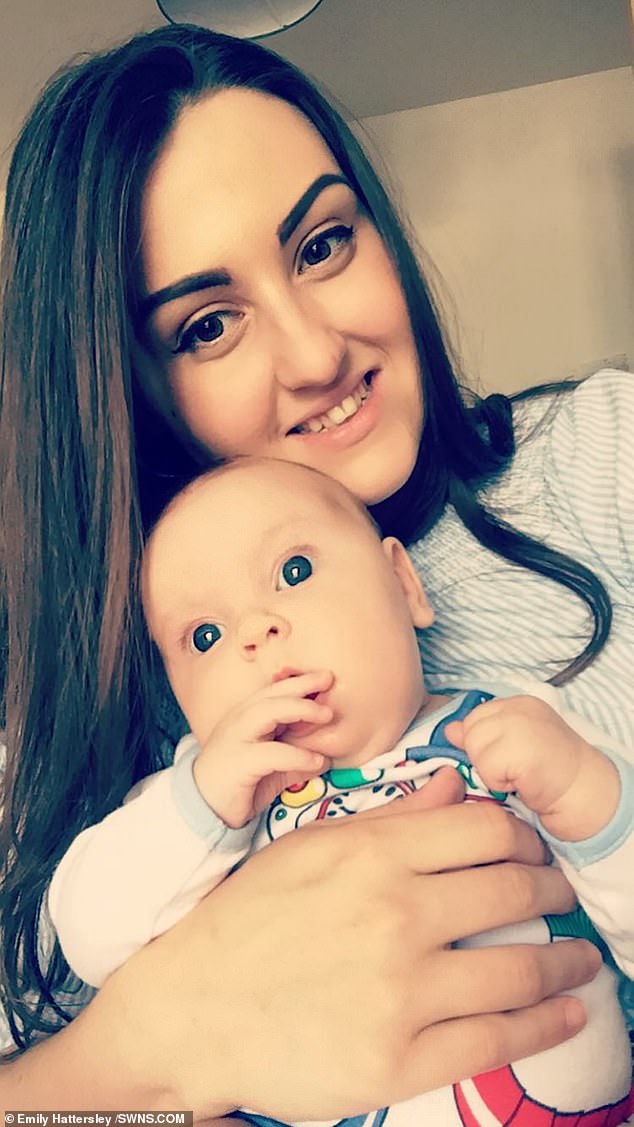 At the end of her first year at university, Emily fell pregnant – and said her ‘whole life flashed before her eyes’ as she stared at the positive pregnancy test

‘I also didn’t have the funds to pay for internet, so this was a very isolating time – but it did mean that I had a lot of time to spend on my A-Level coursework. 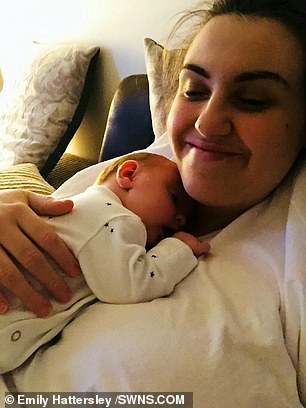 Emily and her partner Owen Gillard decided to keep her pregnancy a secret for as long as possible as her bump didn’t show until a few weeks before Daisy was born (Pictured: Emily and newborn Daisy)

‘I managed to achieve grade ABC in my A-Levels which meant I could go to university. I applied for Cardiff University to do Media and Communications, and got accepted.’

In the summer of 2017, at the end of her first year at university, Emily completed an internship with S3 Advertising in Cardiff.

She said: ‘After a night out, I had a hangover that lasted for three days so I knew something wasn’t right.’

Emily decided to do a pregnancy test, and recalled her feeling of shock when it was positive.

‘The two pink lines were as clear as day and I immediately got tunnel vision. I started hyperventilating and had to sit down,’ she said.

‘I could see everything I’d done in my life flash before my eyes.

‘I knew the statistics of students completing their degrees with babies were low. I knew I had a tough decision to make.

‘My partner came into the bathroom with me, and we cried together.

‘We spent the next few days just talking about what we were going to do, and discussed every possible outcome, as you have to in these situations.

‘Four days after we found out, we had just had a big cry and fallen asleep together, and my partner looked up at me and said “We can do this Em”. I’ll never forget those words.’

Emily and her partner Owen Gillard decided to keep her pregnancy a secret for as long as possible, which wasn’t too difficult because her bump didn’t show until a few weeks before Daisy was born. 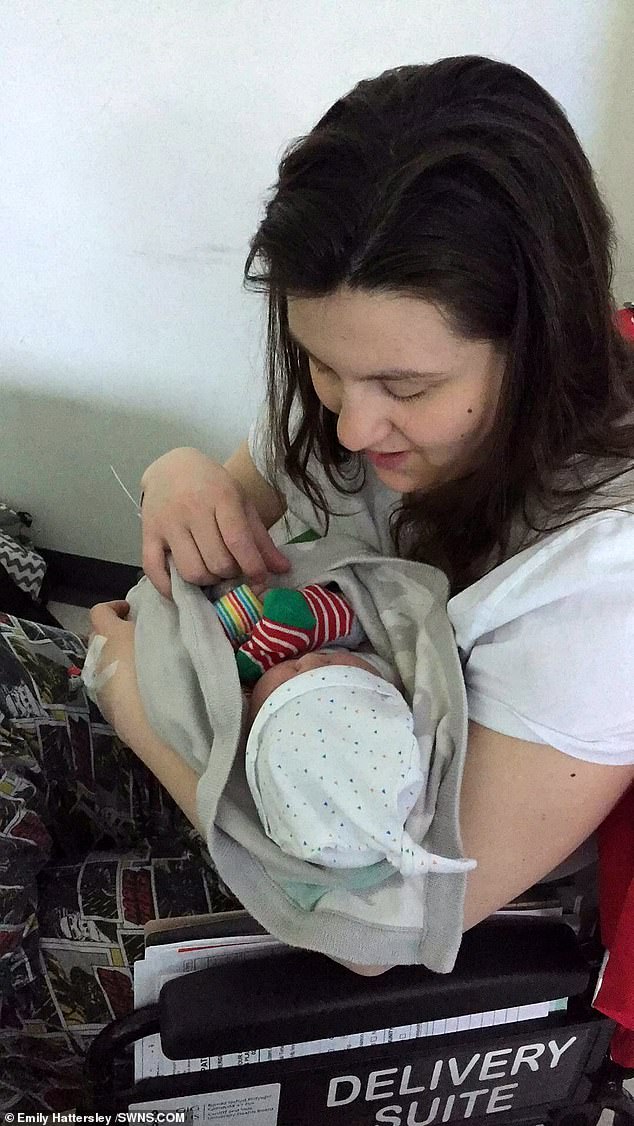 ‘I was afraid of the judgement, and I didn’t want to be laughed at when I told them my plan to finish the rest of uni with a baby,’ she said.

‘My friends from university would invite me to party with them, and I would make up different excuses not to go, so I wouldn’t have to explain why I wasn’t drinking.

‘I did feel lonely a lot of the time, as a lot of socialisation in university is through going out and having a drink.

‘Luckily, though, my partner always made an effort to make me feel special, and I realised that I would have plenty of time to socialise after the baby was born.’

But despite this, Emily said the idea of dropping out of university was ‘always in the back of her mind’ – especially once Daisy was born.

‘If I’m honest though, the time I most thought I would quit was after she was born,’ she said. 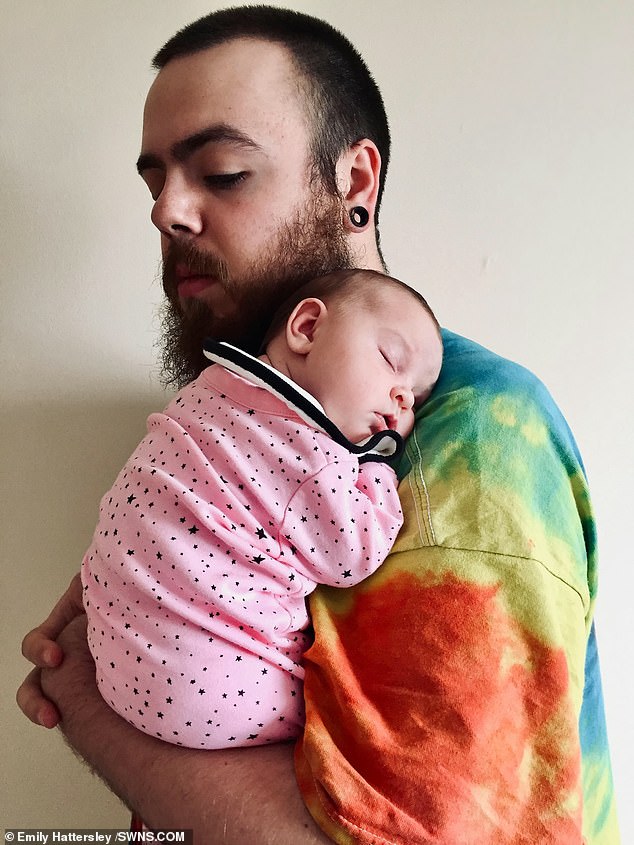 Emily, who lost her father when she was nine, said her success came down to her being a ‘very stubborn person’

‘I was allowed to take time out for extenuating circumstances straight after she was born, so I could complete my modules in the August resit period. However, I didn’t realise how hard this would be.

‘I was breastfeeding every two hours, but still had deadlines looming, and my partner needed to go to work and focus on his own dissertation in the day times.

‘But I had one thing in my mind the whole time; I had set myself a challenge and I was going to complete it, no matter how hard. I’m a very stubborn person.’

This summer, Emily graduated with a first-class honours degree in Media and Communications, with her partner and her daughter proudly by her side.

When asked what advice she would give to anyone in her position, Emily said: ‘Don’t overthink anything.

‘Nothing is permanent, any stress you are under will end eventually, so just ride it out and keep your head up.

‘But also, I’d advise to not be afraid of asking for help. We all struggle, but those that succeed are the ones that shared their problems and got help from others.

‘And my final piece of advice would be to never regret anything that happened in your past.

‘I see everything that has happened to me as a learning experience that has made me the person I am today.

‘Life is a journey of personal growth, and every experience is a lesson.’