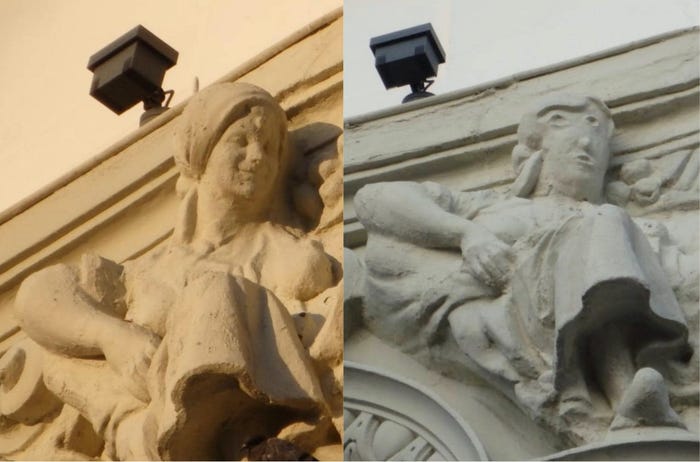 Restoration work on a sculpture in Palencia, northern Spain, has drawn ridicule across social media in the country's latest artistic botch-up.

Antonio Capel, a local artist whose studio is across the road, shared images of the restoration work on Facebook last week and said that the sculpture now looked like a "cartoon character."

Some compared the sculpture to incumbent US President Donald Trump with one Facebook user commenting: "Seeing as he has had to leave the White House, he's moved in here," Sky News reported.

However, what was once the smiling face of a woman next to some livestock, has now become known as 'The Potato Head of Palencia.'

In his post, Capel references the 'Christ of Borja,' comparing the recent work to that done by then 81-year-old amateur artist, Cecilia Giménez at the Sanctuary of Mercy church in Borja in 2012.

Giménez took it upon herself to update the 1930 'Ecco Homo' fresco by Elías García Martínez, which is now famously known as 'Monkey Christ' and has visitors from across the world, Classic FM reported.

The new sculpture is part of the decorative exterior of a 1919 building commissioned by the then-president of Spain's Catholic-Agarian Federation and designed by Jacob Romero, according to local newspaper, El Norte de Castilla.

The building was officially opened in 1923 and currently operates as a Spanish bank branch, Unicaja, El Norte de Castilla added.

Capel told CNN that he hasn't been able to find out who commissioned or carried out the work but that crowds had been gathering after the photos were shared across Spanish media.

He added that he doesn't understand why amateur restorers think they can take on these projects or why those responsible authorize them. ""It doesn't seem normal to me," Capel told CNN.

Spain's Professional Association of Restorers and Conservators (ACRE) tweeted an article about the piece with the caption: "This #IsNotARestoration. It is NOT a professional intervention."

Earlier this year, an art collector enlisted a furniture restorer to update a copy of 'The Immaculate Conception of Los Venerables,' by Bartolomé Esteban Murillo. However, the restorer turned the face of the Virgin Mary into a lumpy mess, the New York Post reported.

In 2019, another amateur restoration of a 500-year-old statue of a Spanish warrior also drew outrage also for looking more like a children's cartoon character, the New York Post added.