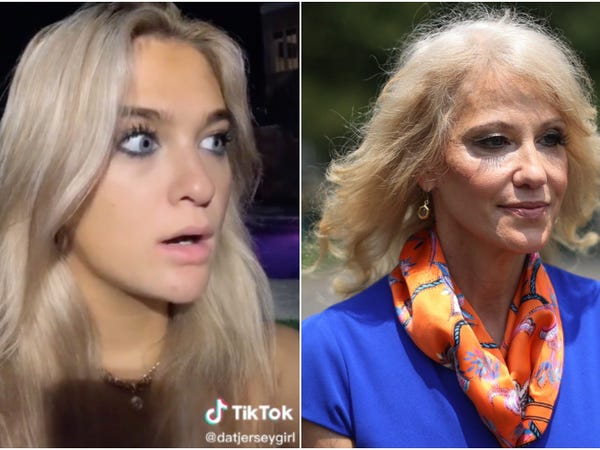 Claudia Conway says she has no "'special' insight into the President's health status" and is not the "'whistleblower' of our time" in a new statement on TikTok. Conway, the 15-year-old daughter of former Trump advisor Kellyanne Conway, posted the statement after a series of controversial posts she made about her mother's COVID-19 status earlier this week.

The teen, who has approximately 1.3 million videos on TikTok, has become a public figure in her own right over the  past several months after her political TikToks and public feuding with family members brought her into the spotlight. She recently broke the news that her mother had COVID-19 before Kellyanne Conway publicly confirmed her diagnosis, and made comments on TikTok alleging that President Donald Trump's health was worse than what was being presented to the public following his own COVID-19 diagnosis.

In Claudia's Tuesday night statement, which she also shared in a Google Doc, she rebuked the notion that she was a "whistleblower," a label that people on social media and media outlets alike had associated with her name.

"It has come to my attention that my recent TikToks and comments have sparked intense controversy and uproar. This was not my intent. I am appalled at the mainstream media's efforts to exploit a teenage girl, which is negatively affecting my mental health," the statement reads.

"I am not the 'whistleblower' of our time. I am simply a fifteen year-old with a following and bad luck when it comes to media coverage. Leave my family and me alone," it says.

Claudia Conway began to build a following this summer after she expressed support for the Black Lives Matter movement and began posting other political content on social media this summer. In June, she told Business Insider in an interview, where her father George Conway was present, that she wanted to use her TikTok platform to "inform people and spread love."

As her digital profile grew, she began to publicly spar with her parents, posting a TikTok in August about her mental health and family conflicts.

In the statement, Claudia addressed previous allegations she made about Kellyanne and Trump

On October 2, following news of President Trump's COVID-19 diagnosis, Claudia broke the news that her mother, Kellyanne Conway, had COVID-19. Kellyanne Conway, and at least eight other GOP officials who attended a September 26 event celebrating the Supreme Court nomination of Judge Amy Coney Barrett, have since tested positive for COVID-19.

In a video posted on Monday night that has since been set to private, Claudia Conway retracted a claim she made that her mother had lied about the negative results of a COVID-19 test. In the background, Kellyanne could be heard instructing her daughter off-camera. In the video, Claudia said, "My mother claims that she did not lie to me. She had three tests done. First negative. Second two positive. We were not in communication. I misinterpreted it."

Conway also addressed the incident in her statement posted on TikTok, which says that "a miscommunication between us led me to think that she told me her test was negative instead of positive, without me knowing she had three tests done.

"My mother did not lie to me. She has done everything in her power to ensure my safety and health and the safety of the rest of our family amidst her (and my) diagnosis," the statement reads.

Claudia also addressed allegations she made in the comments of her TikTok videos that the president's condition was worse than what public information suggested and that he was "literally not okay."

"When I said that President Trump was not 'doing better', I was, as many teenagers are, speculating and assuming," Conway wrote in the statement posted on TikTok. "I have absolutely no 'special' insight into the President's health status. I did not get any information from my mother. I wish the President and the First Lady great health and a speedy recovery."

Conway has been framed as a 'whistleblower' with inside information, a notion the statement she posted rebukes

On social media, the debate around Conway as a public figure, as well as the credence given to the claims that she's made, have come to a head with some hailing her as an investigative force and others questioning whether she's now an "American hero."

Vox's Rebecca Jennings commented that Conway's social media presence, in her posts about her own mental health, her family, and American politics, are not "interesting because they are abnormal — they're interesting because they're relatable." The difference is that Claudia's social media posts have become the focus of national attention, due to a perceived closeness to the nation's leadership.

The statement that Conway posted refutes that notion, and her current TikTok bio reflects the sentiment as well. While, per Vox's October 6 article, her TikTok bio previously read, "Currently trending on twitter for no apparent reason… the media is obsessed," it currently reads, "just ur average teenage girl."

A foreword to the statement Conway posted, as it appears in the Google Doc link, says that Claudia wrote the statement, and she has repeatedly denied in the comments of her still-public TikTok video that she didn't write it or that her mother forced her to write it.

"I am tired of the mainstream media using my situation and my views for their own personal benefit. I am a child and I am to be treated as one. This is severely impacting my mental health," the statement's foreword reads.