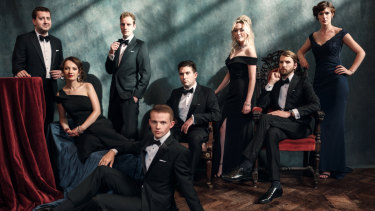 From an “accidental” start, VOCES8 have found huge success.

The music of Bach is almost unique in its ability to excite pioneers and period purists alike. Something of both ends of that interpretive spectrum was apparent at ANAM’s collaboration with British a cappella ensemble Voces8, although I’m not sure concertgoers interested in either tradition or trailblazing will have left totally satisfied by this sometimes off-balanced rendering.

One of this music’s most remarkable qualities is how effortlessly it shifts between the epic and intimate, one moment an imposing monolith of God-fearing power, the next a delicate exaltation, light as a wind-drift feather.

Voces8, bolstered by two guest singers, certainly delivered on the smaller end of this scale, with an expertly blended tone and crisp diction, as well as several impressive solos from the group’s core members.

However, by breaking with convention by opting for a one-to-a-part approach, the grander and more contrapuntal sections felt frustratingly underpowered. In passages where choral heft would better serve Bach’s intention, these compact vocal forces were easily swamped by the orchestral accompaniment.

Even though this performance may have suffered from a lack of clarity at times, it nonetheless offered a thorough understanding of Bach’s acoustic universe.

Playing on modern instruments but with a weather eye on a historically informed sound world, the orchestral forces were expressively free without muddying the truest essence of this music’s Baroque character.

Conductor Benjamin Bayl brought an almost sculptural quality to his direction, hewing carefully considered textures from the contained worlds of each movement while also bringing a cohesive vision to work as a whole.