If you wanna be a Spice Girl, you gotta get yourself a nickname! The iconic pop British girl band took the world by storm in 1996 with their debut album “Spice” which eventually hit No.1 on the Billboard 200. The album included hit songs “2 Become 1,” “Say You’ll Be There,” and, of course, their No.1 hit “Wannabe,” and from that moment on, the Spice Girls were a worldwide name.

Posh Spice, Baby Spice, Scary Spice, Ginger Spice, and Sporty Spice became the pop stars no one would forget, and despite breaking up and making up, their fans have stood by them for two and half decades. Years after their debut, new details behind the Spice Girls’ rise to fame are being revealed, with some secrets even the most obsessive of fans don’t know.

The first surrounds Posh Spice, a.k.a. Victoria Beckham, who revealed in 2016 she wasn’t really performing while on tour with the Spice Girls. “They used to turn [my mic] off and just let the others sing,” said Beckham (via The Independent). Beckham joined the Spice Girls in 1995 when the band had yet to change their name from Touch, replacing previous girl group member Melanie Laccohee (via Marie Claire).

With a new manager in place, Touch became the Spice Girls, and each pop diva was given their own nickname, but where did those names come from? Read on to find out.

The Spice Girls didn't get to choose their nicknames 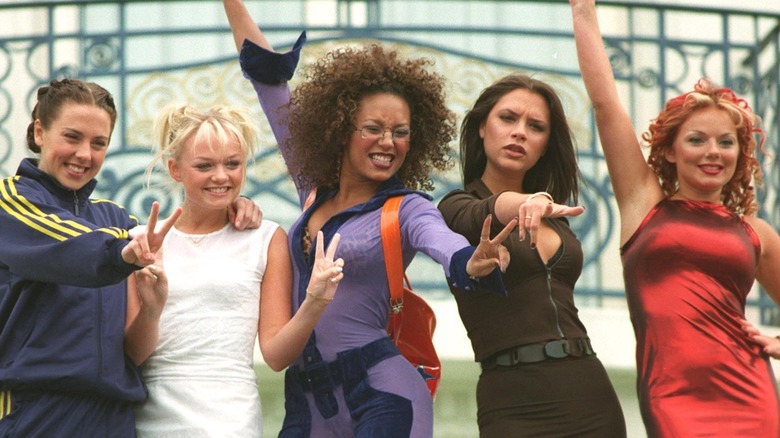 In an interview with HuffPost in 2015, Melanie Brown, a.k.a. Scary Spice, spilled all the tea on how the ladies of the Spice Girls got their nicknames and how she really feels about being called “scary.”

“It was actually a lazy journalist that couldn’t be bothered to remember all our names, so he just gave us nicknames,” she said. “And we were like, ‘Oh, well, that kind of works. I don’t mind my name. Do you like your name? Baby? Posh?’ We were like, ‘Let’s just go with it.'”

Bustle caught up with the “lazy journalist” named Peter Loraine, editor of Top of the Pops magazine in the 1990s. “Posh was the first one to be thought up because Victoria looks pretty sophisticated,” Loraine revealed. “The rest were pretty easy really because the girls’ characters were already really strong. The names jumped out at us. We laughed the most when we came up with Scary … because Mel B was so loud and had tried to take over our whole photo shoot.”

The nicknames stuck for the Spice Girls, who embraced the names over the years. “I’m very kind of in-your-face,” admitted Mel B, revealing she wasn’t offended at being called the “scary” Spice Girl. “I was even more so back then. I was, what, 17, 18, like, ‘What! What do you want?!’ So I guess I could have come off as Scary. But I like my name.”