Marc Anthony and Jennifer Lopez might be the most well-adjusted divorced couple of all time. At least one that’s in the public eye so heavily. Now, we don’t know what goes on behind closed doors, but they’ve collaborated several times since their divorce in 2014 and Anthony even produced Lopez’s Spanish-language album in 2016. And one of their best duets came after their divorce, too.

In 2016, Marc Anthony and Jennifer Lopez dueted a cover of an ‘80s Latin power ballad 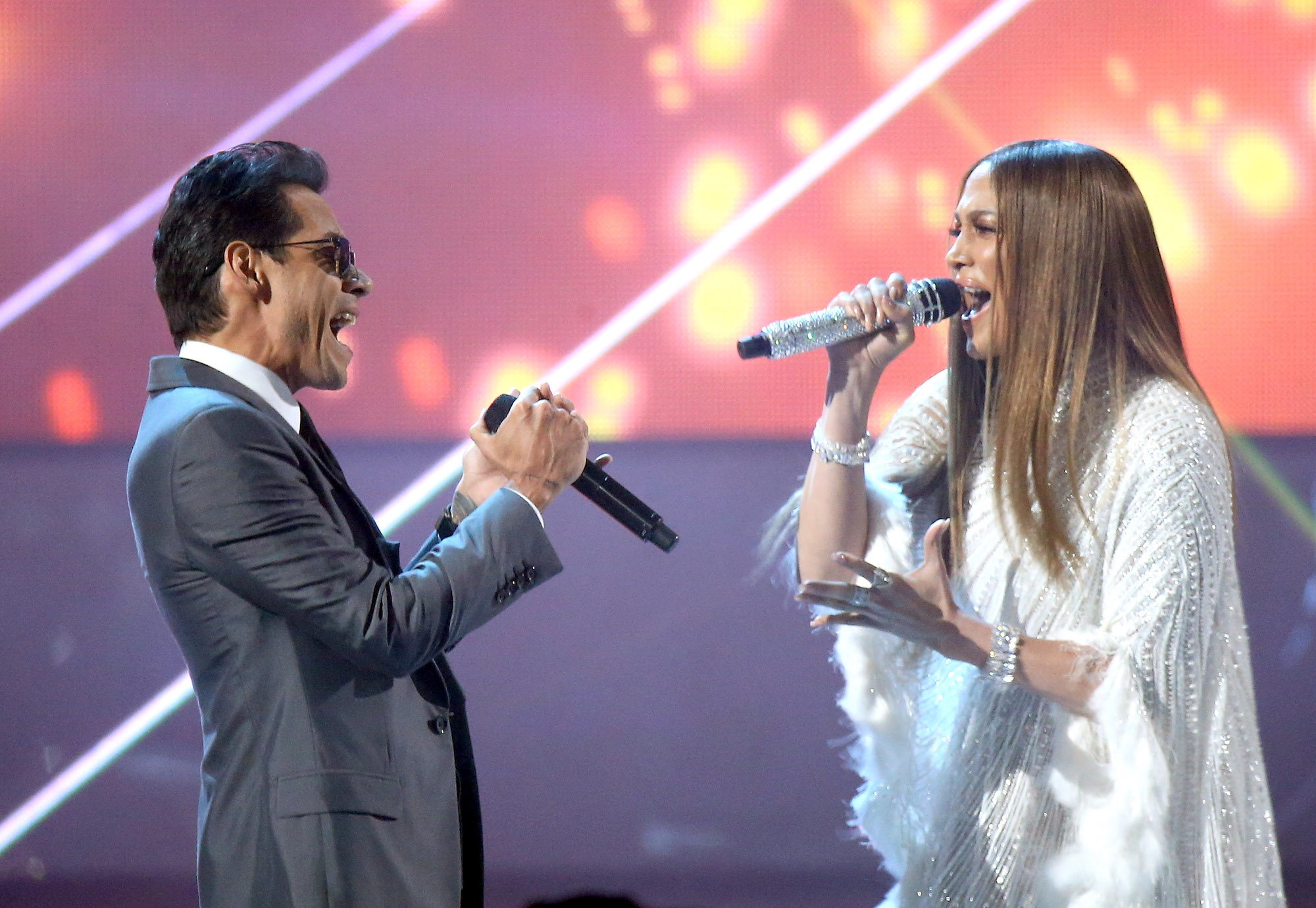 Two years after they split, Anthony and Lopez jumped on a new version of “Olvídame y Pega la Vuelta.” The song was originally released in 1984 and was recorded by sibling duo Pimpinela from Argentina. Pimpinela had an English version of the song as well, called “Get Out of My Life, Now!”

Anthony and Lopez’s version came out in November 2016 and it was their fourth duet. They also put out a “tropical” version of the song not long after the first one went out. Most notably, they performed the song live at the Latin Grammys on Nov. 17, 2016, and that’s really what sets it apart from anything else.

“The performance was full of intensity, humor and passion — and every second of it was absolutely irresistible,” Carolina Miranda wrote for the Los Angeles Times. “The 17th Latin Grammys are more likely to be remembered for the dramatic laser-light-filled duet between former couple Marc Anthony and Jennifer Lopez.”

Another aspect that makes “Olvídame y Pega la Vuelta” so good is the intensity behind the lyrics, since it’s such a powerful song. It’s the perfect duet for dramatic couples just because of the back and forth dynamic of the song.

What is the song about?

The tune starts off with the female singer sort of wallowing or reflecting on her pain after a very hard breakup with someone. She talks about how it’s been two years and it’s been a slow time getting over her love. But she was doing it. And then he showed up one night.

This is when the male voice comes in with a mysterious “Soy yo…” after the female voice asks, ”¿Quién es?” It becomes a dialogue here, where she’s asking why he’s there, and he says for her. She finally has enough and firmly sings, “Porque ahora soy yo la que quiere estar sin ti,” which is her saying now she’s the one who doesn’t want anything to do with him.

Then the fabulous chorus comes in, which consists of, “Por eso vete, olvida mi nombre, mi cara, mi casa y pega la vuelta,” which has the title of the song in it. She’s just telling him to forget everything about her, her “name, face, house” and to turn right around.

He has his own verse as well, where he basically pleads for her forgiveness. It starts off with him singing that he was disillusioned by the temptations around him, which is why he left. He sings, “Y al descubrir que era todo una gran fantasía volví” essentially saying it was all a “grand fantasy.” Then he says he now wants to return to her when he didn’t find what he was looking for.

She stands her ground and says “Adiós” to which he responds with “Ayúdame” or “Help me.” And then the chorus hits again. There’s a lot of back and forth again until the end, with she’s just repeating the chorus about how she’s now the one who doesn’t want him. He needs to go. 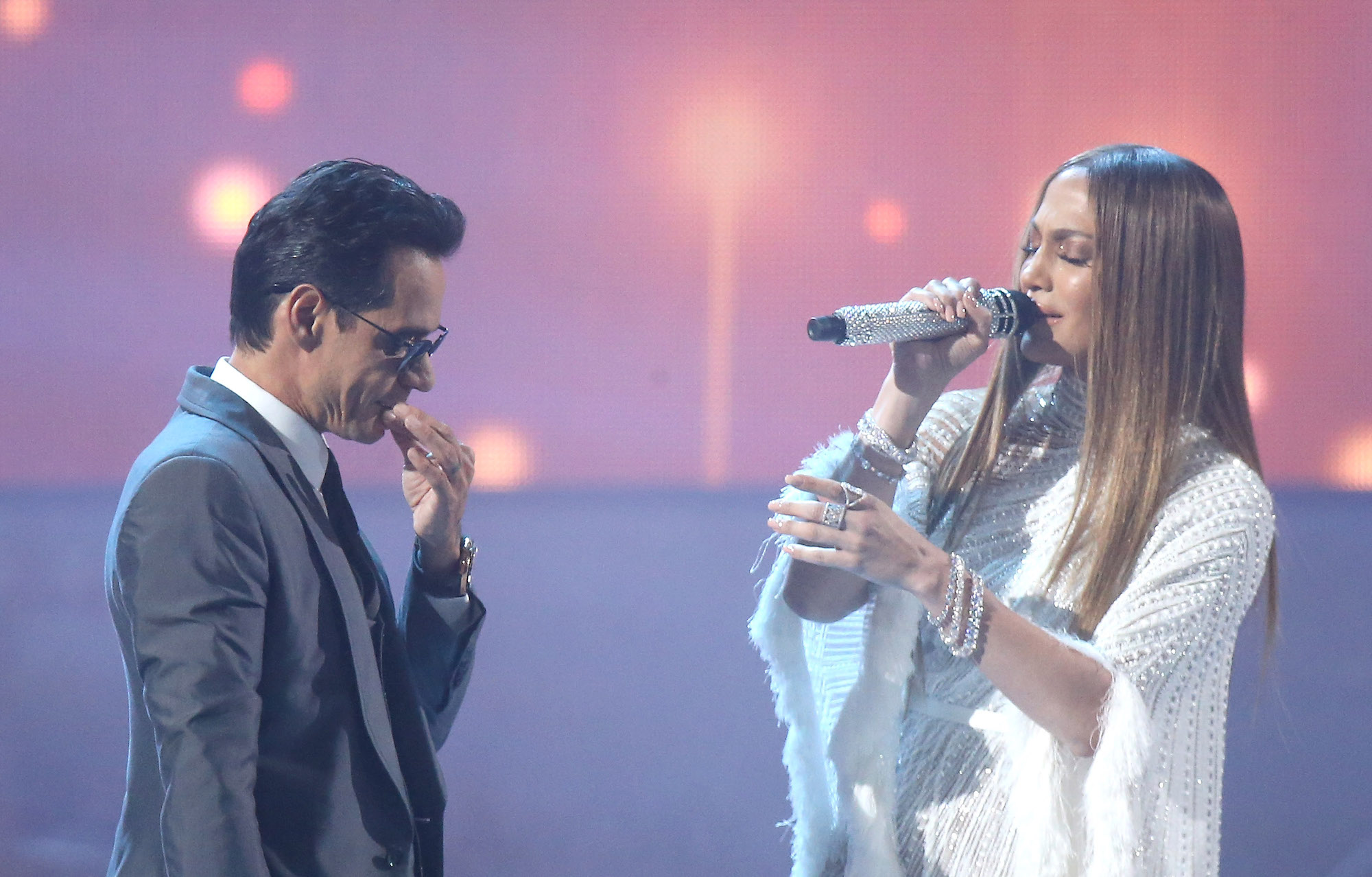 Between those very intense lyrics and their Grammy performance of it, it’s a no brainer that this is one of the best, if not the best, duet between Anthony and Lopez. The three duets that took place before this one were “No Me Ames” in 1999, “Escapémonos” in 2004, and “Por Arriesgarnos” in 2007.

This song is just such an interesting dynamic for a divorced couple to sing. The whole song is about how the man hurt the woman and he’s now begging for her to take him back after two years apart. Again, this was two years after Anthony and Lopez divorced in 2014. Plus, there’s a lot of emotion not only in the song’s recording by the Latin Grammy performance.

A good chunk of the performance takes place upstage and they’re not really singing that close to each other. A curtain drops at one point and the ending has a lot of raw feelings there. They’re both actors as well, and of course fabulous performers. So it hits well with everything involved. But it does just make you wonder how much of that was real emotion flowing through. Either way, it’s worth a watch, and a re-watch at that. This is also a great selection to pull out for karaoke.