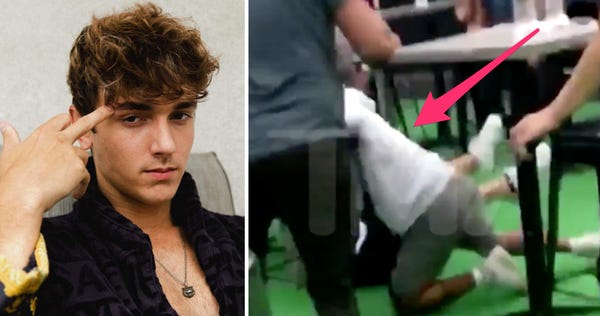 TikTok star and habitual troublemaker Bryce Hall is being investigated by the Los Angeles Police Department after a felony battery report was taken that names him as an alleged attacker, a representative of the department told Insider.

Video footage obtained by TMZ shows Hall, who is 21, with his friends at a Mexican restaurant called Cinco LA on Monday during the daytime. Hall, who has more than 14 million TikTok followers, appears to be involved in a physical altercation between members of his party and staffers at the restaurant.

Hall can be seen on top of what is believed to be one of the restaurant workers in the video, with other individuals trying to pull him off. The pair then crash into another patron's table as the restaurant guests react with shock. After being separated, an onlooker curses out Hall, telling him to "get the f— out" and calling him and his friends "punks."

The LAPD representative told Insider that Hall and his friends fled the scene before police arrived. A report for a felony battery allegation was taken, stating that Hall was asked to leave the restaurant, after which Hall "struck" the victim and pushed him to the ground. Hall is "Suspect 1" in the ongoing investigation, and another unnamed "Suspect 2" in his party also placed the victim in a chokehold, the LAPD said.

TMZ also reported that the brawl started after Hall was asked to stop vaping, which is illegal in restaurants in LA. Sources told TMZ that Hall refused to stop vaping and blew smoke in a restaurant employee's face. Social media posts taken by Hall's party at the restaurant showed Hall's vaping device at the table.

According to the posts, Hall's former fellow Sway House TikTok group member Griffin Johnson was also at the restaurant, along with a Sway House associate named Rory Fitzpatrick. Johnson and Fitzpatrick didn't respond to Insider's request for comment.

never seen a photo this cancelled

Hall didn't respond to Insider's request for comment, but he told TMZ that he was vaping and was cordial when a manager asked him to leave the restaurant. Hall says he asked for his credit card to be returned to him more than 10 times before he says the manager told him "No, get the f— off the property."

Hall also told TMZ that the manager grabbed him first to try and physically escort him off the property, which is when Hall said the physical encounter started. Hall claimed he was the one to put the manager in a headlock while "defending" one of his friends. Hall also said the manager kicked his genitals during the fight.

A photo of the restaurant employee's hand after the brawl was shared with TMZ, which appears to show it swelled up and was potentially broken during the altercation.

Hall has a history of violent encounters. On October 5, just two weeks before the incident at Cinco LA, he tweeted a video of himself and other Sway House members physically attacking someone, captioned "we don't condone violence, but if you punch someone in front of us, we'll have no choice but to defend ourselves."

Hall also apologized for physically assaulting his friend Zach Clayton in December 2018, tweeting "what i did was f—ed up" after YouTuber Tana Mongeau made an exposé video about the attack.

The ongoing LAPD investigation into his conduct at Cinco LA is just one of several 2020 scandals Hall has been embroiled in. Previously, in May, Hall was arrested in Texas and charged with marijuana possession. In August, Hall was charged for violating LA's coronavirus safety guidelines after he threw a massive 21st birthday party.