It’s hard to believe 2012 was almost a whole decade ago (WOW), but the year birthed many iconic music gems that continue to remain at the top of our playlists. Whether it was “Call Me Maybe” by Carly Rae Jepsen, “Boyfriend” by Justin Bieber, or “Diamonds” by Rihanna, the hits kept on coming. But one bop that ruled the airwaves—for a whopping 16 weeks with two number one spots on the Billboard dance charts—doesn’t always get the recognition it deserves: “Brokenhearted” by duo Amy and Nick Noonan, formally known as Karmin. 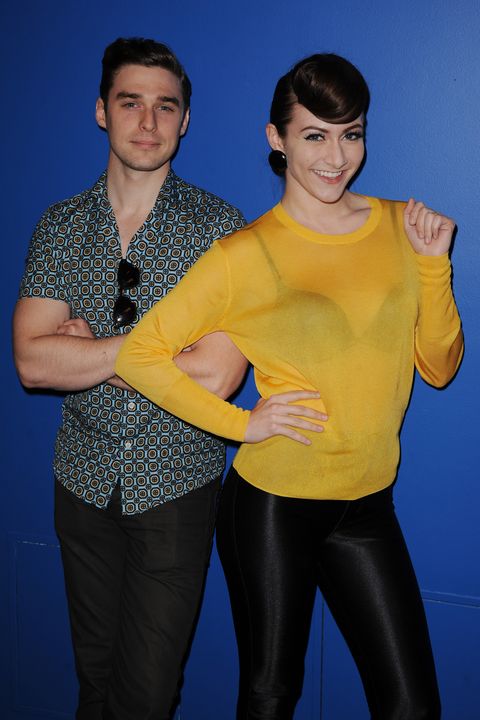 While it may seem like Karmin “disappeared” by the end of the 2010s, that narrative is actually false. Instead of creating more of the sugary, teen-friendly bubblegum pop they became known for with “Brokenhearted,” Amy went back to her roots, rebranded as Qveen Herby, and began creating witty, highly-infectious self-love infused rap and R&B (alongside her husband) that has captured the attention of both Cardi B and Jennifer Lopez. Don’t call it a comeback, call it a ~metamorphosis~.

Given how prolific Qveen Herby is (seriously, she’s released NINE EPs since 2017!!!), it’s about time to read up on her before her debut studio album drops. Cosmopolitan got the intel on Amy’s evolution from her Karmin days, the drama with her and her husband’s former record label, and her makeup line Qveen Studio in the following Q&A from October 2020.

Cosmo: You first achieved mainstream success when you released “Brokenhearted” as one half of Karmin back in 2012, but your new style is more rap and R&B-oriented. What prompted that shift in music styles?

Qveen Herby: I would actually describe my experience of achieving fame for the first time in 2011 when my boyfriend and I covered a song called “Look At Me Now” by Chris Brown. On the radio, they heard “Brokenhearted,” but that cover changed our lives overnight—we were on The Ellen DeGeneres Show that week. We had a meeting with Kanye West. It was wild, but then our label [Epic Records] pushed us toward what was going to make the most money. That’s probably why most people heard “Brokenhearted,” but the truth is that we got our start rapping.

We learned so much doing pop music under a label thing and then felt empowered enough to do it independently and go back to what we originally wanted to do with rap, so Qveen Herby is a full circle moment.

What inspired the name change from Karmin to Qveen Herby?

I grew up in a Christian house in Nebraska and wasn’t exposed to anything outside of Christianity. When I thought of the word “karma” I thought it was a really cool and edgy word, but I learned that karma is about lessons that you experience in your lifetime. We called ourselves Karmin to put the word “karma” in our name and thought it was so hip. It makes so much sense now in hindsight, because the name was like a stepping stone to something greater.

When it came time for Qveen, I felt I was giving birth to my true self for the first time. The energy behind the music was about empowerment, self worth, and confidence, and I felt like I needed to call myself a queen in order to become one. We put the V in there to differentiate from all the other queens of the world, but the V is also for vagina or female empowerment. As for Herby, it comes from the Herbie Husker mascot for the University of Nebraska-Lincoln football team. Combining the two was me calling myself a queen but also not forgetting where I came from.

Nick Noonan was your boyfriend at the time you were both in Karmin, but you guys ended up getting married, right?

Yes, and I think a lot of people were like “Wait, when was the wedding?” “Why weren’t you on the cover of all these magazines?” In America, there’s always pressure to have a big wedding and kids right after, but our label was actually very against it. They said it wasn’t marketable, which was kind of ridiculous because it wasn’t a secret that we were boos…but we listened to the label and had a confidential marriage.

We bought our first house and got married in the backyard to save the label from their marketing disaster. We just never had a public thing. Our families were so upset. We had a wedding scheduled, but the label execs really said, “Guys, we we don’t feel confident pushing your music if you’re a married couple.” It was an intense experience, but Nick and I are still together after 15 years.

Did Nick have any feelings about breaking up Karmin to help you focus on a new project?

When I became Qveen, I felt bad for Nick since he was half of Karmin and was basically disappearing from the spotlight. What happened is that he found out he loves producing music, and it’s just as exciting to him if not more than holding a microphone and doing choreography. He was not really as excited about those elements, and it was usually me reaching out to the fans anyway. I’m really lucky to have him. I definitely would not be able to afford to put out this much music with somebody that wasn’t as committed!

What was it like producing music on a huge label versus an indie? Would you ever go back to a larger label?

I don’t want to say I won’t ever work with a major label again, but I love the idea of being one of the first independent artists to do things on her own. It’s more exciting to me to pave the way and have control, because when you work with labels, they pay for everything and you have to surrender yourself to that contract. For me, it’s more exciting to do this independently, or even start my own label that helps other artists establish themselves and make an actual living from music.

Do you feel like making R&B music is more rewarding or emotionally fulfilling than making pop music?

One million percent. I was alone in Nebraska growing up with my Brandy CD, my Brian McKnight albums, my 112 albums, and I got a little taste of rap through R&B music. That style of singing has always been my first love, so I think Nick and I are both satisfied now making more soulful music.

Speaking of ’90s icons, your song “Sade In The 90s” got some backlash a few years ago. You were accused of blackface and cultural appropriation. Can you explain what that was about?

Looking back, I would say the most interesting thing to me was how my reaction was to be silent. My reaction was confusion. I would task my Black friends with explaining to me that everything was okay. Then, I started peeling back layers of Why? Why does this bother me? What is what was it that triggered those people? Since then, I’ve learned a lot more about the systems that America has in place to oppress Black people and people of color, and that as a white person making Black music, I need to be much more aware of and much more comfortable talking about that because silence is the most dangerous.

My producers, my creative director on that video, and the hairstylist that braided my hair that day were all Black. It was such a magical experience on set, but I didn’t take into account what the world might perceive it as—a white girl with braided hair and a spray tan, surrounded by melanin. If I could go back in time, I think I would have communicated better about what my intentions were with that song and with that video, rather than remain silent and let the controversy spiral, because what upset me at the time was that it made that video get more views since people were arguing about whether or not it was appropriation.

How would you describe your sound to someone who has never listened to your music before?

I would probably call it haunted mansion trap, although I don’t want to use the word trap as a white artist because a trap is a community where drugs are made in and sold because other opportunities are not available to people of color. Trap is a very conflicting word for me to use, but the drums that we use are very much inspired by trap music. Sonically, the music often has a classical tone with strings, oboes, harps, and harpsichord, which takes people off guard. I’m also very inspired by Morticia Addams, Walt Disney, and fantasy elements. It’s very theatrical hip hop in that sense.

How did you feel when you realized that Cardi B acknowledged your cover of “WAP” and tweeted about it?

I felt like I needed to cover the song mostly to process my relationship with my sexuality but also to show my support for women speaking freely about their sexuality period. Cardi did not have to even acknowledge that I did that, so the fact that she did was beautiful to me. It was really magical and special.

Artists sometimes drop wearable merch to accompany a record release, but instead you choose to drop a new makeup palette under Qveen Studio with each EP. Why does this feel like the right medium for you?

Makeup has always been a passion of mine, and I usually do my own makeup, my own hair, and my own styling for all my videos for the most part. I thought, Well, if I’m going to sell T-shirts, mugs, and other merch, why not have the makeup available from the video?

One of my girlfriends at the time was getting out of a really bad record deal, so I suggested we start a makeup line together. We called all the labs in California and found one that was willing to help us develop our first lipstick color. Not all of my listeners buy makeup, but there’s this sliver of them that really do love it. It’s opened up other opportunities that are outside of music that I never thought possible. Being on that female CEO trip or boss bitch energy makes me feel confident that I can help other women do the same thing.

How do you want your fans to feel when they listen to your music or wear products from your makeup line?

I always make my songs about the same things. It’s about self worth, self care, confidence, and surrender. After you build yourself up, call yourself a queen, and figure out what it is that you want…you have to let it all go. That is the key. I want my fans to feel that confidence. I want them to feel like a bad bitch because once they get all of their stars in alignment, all you have to do is let go and enjoy the ride.