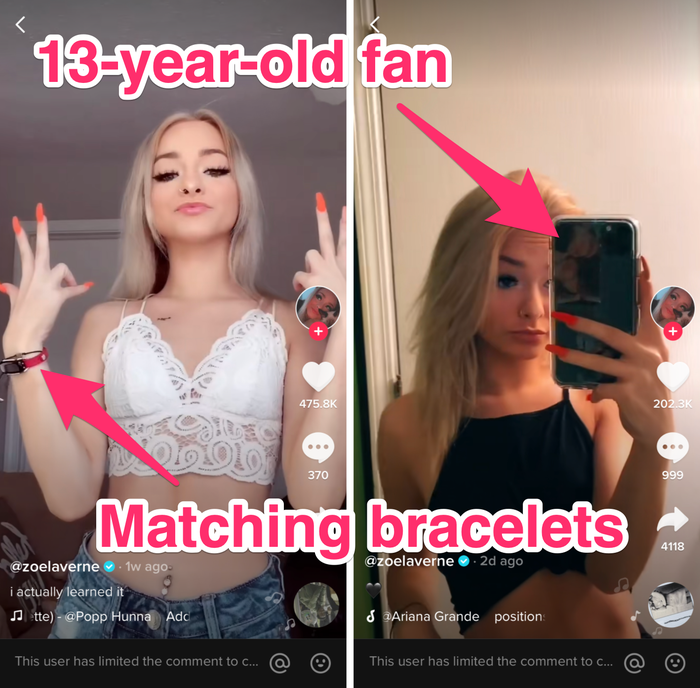 Despite seeming apologetic for kissing her 13-year-old fan, 19-year-old TikTok star Zoe LaVerne does not appear to be hiding her inappropriate relationship with him from her audience of over 17 million followers.

LaVerne's latest TikTok videos appear to show that she has a picture of the 13-year-old on her phone case and that she may have matching Bond Touch bracelets with him, which send a signal between wearers. She also addressed a comment accusing her of being a "child groomer" by lip-syncing to audio of Cardi B saying, "Imma be the way I am until I f—ing die" in a private, leaked TikTok.

LaVerne has been an influencer since 2016, and she has 17.6 million followers on TikTok. In early November, LaVerne apologized for kissing and "catching feelings" for a 13-year-old named Connor who has over 400,000 TikTok followers of his own. LaVerne called Connor her "best friend" and said she had cut contact with him after a video of the two kissing leaked on social media.

Previously, LaVerne had been in close contact with Connor, and the two appeared in-person together in more than a dozen TikToks and social media posts in 2020. In her original apology, LaVerne also said she had told Connor's mother that the two kissed and wrote, "She wasn't happy obviously but she understood that we are both teenagers and that feelings can be caught."

But LaVerne has since doubled down publicly on her feelings for Connor. She commented "Hi connor.. i miss you" and "I hope you're doing well. Miss you lots!" on one of his livestreams. She also posted a TikTok with two pictures of her and Connor and the caption "My happiness."

Now, LaVerne's most recent TikTok videos appear to show that she has a selfie of her and Connor on her phone case.

It also appears that LaVerne and Connor have been wearing matching Bond Touch bracelets, which are electronic devices that send a vibration to the other person's bracelet when pressed. The bracelets are visible on both LaVerne's and Connor's TikToks.

Beyond her public displays of affection for Connor, LaVerne also addressed accusations that she's a "child groomer" in a private TikTok that was leaked to the public. Grooming refers to building "a relationship, trust, and emotional connection with a child or young person so they can manipulate, exploit, and abuse them," according to the National Society for the Prevention of Cruelty to Children.

In the leaked TikTok, LaVerne responds to a comment that says "imagine supporting a child groomer" by lip-syncing to audio of rapper Cardi B saying, "Imma be the way I am until I f—ing die. And if you don't like it, die first, b—-."

Previously, LaVerne had denied that she was grooming Connor, saying in an apology that "I wouldn't do that. He's a kid and I'm aware of that. It just happened."

Now whether LaVerne and Connor "stopped" is being called into question. LaVerne's mother has publicly defended her throughout the accusations, saying, "Anybody can reach over and kiss somebody. They're best friends."

Laverne and her team did not respond to Insider's continuing requests for comment.