In early 1990 the Mark of Cain guitarist and Department of Defence employee John Scott was posted to Tel Aviv to assist with an RAAF contract. Six months earlier the Mark of Cain had released its debut album, Battlesick, a pummelling record that blended the band’s Joy Division, Big Black and early Black Flag musical influences with Scott’s interest in the writings of Albert Camus, Colin Wilson and Jean-Paul Sartre. 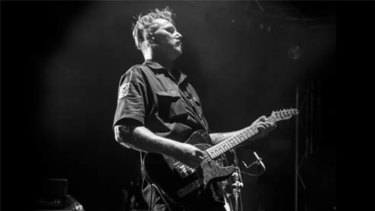 The Mark Of Cain’s John Scott on stage.Credit:

A year into his secondment and with US forces preparing to invade Kuwait and Iraqi president Saddam Hussein threatening to rain Scud missiles on Israel in retaliation, Scott and his colleagues took the last available commercial flight out of the country. For a brief moment, Scott was an ordinary human dealing with exceptional circumstances – the very philosophical concept that underpinned the Mark of Cain’s conception and evolution.

“It was probably not as serious as you would think,” Scott laughs, as he recalls those dramatic events. “It was a bit exciting, but at the same time I didn’t feel we were in any danger. But in the period after we left areas in the neighbourhood where I was living got Scudded, so I’m glad we got away.”

Scott had formed the Mark of Cain in Adelaide in 1984 with his younger brother Kim. John Scott’s engineering studies operated in parallel with a fascination with existentialist philosophy and oral history of war experience, the latter which came to the fore on Battlesick. “There was this whole idea of being alone, of being different, exploring dark sides, as well as some of the bits of my interest in war woven through it,” Scott says.

Battlesick was greeted with critical acclaim and helped to break the Mark of Cain outside of Adelaide. Songs such asYou Are Alone, The Last Judgement and The Hammer were intense explorations of the human condition and “ordinary heroes who walk amongst us … normal everyday people who out of exceptional situations show an ability to power on through or push on through,” Scott says. Then there was the “mini horror movie” of Dead Man’s Mail, in which the narrator receives ‘dead man’s mail’ – the colloquial term adopted for mail sent to a deceased serviceman’s address.

The Mark of Cain was always a part-time proposition, squeezed in around the Scott brothers’ respective job commitments. When John Scott returned from Tel Aviv in 1991, Kim Scott headed overseas for his own secondment. By the time the pair were both back in Adelaide, “Nirvana had changed the world and independent music was suddenly really visible”. With the relative luxury of salaried employment to support them, the Mark of Cain has remained true to its uncompromising roots. “We were chuffed when [third album] Ill At Ease did so well, that was great,” Scott says. “But I think having some independence helps you to do what you want to do.”

The Mark of Cain released its fifth album, Songs of the 3rd and 5th, in 2015. Scott hopes the band have another album in them, but when it returns to the stage next month for a national tour, it will be to celebrate the 30th anniversary of Battlesick. While the Scott brothers’ musical relationship is as strong as it was 30 years ago, the elder “more musically inclined” brother remains mildly jealous of his younger brother’s engineering and practical nous.

“Kim’s always been one of those guys who gets things straight away,” Scott says. “You can tell him he has to operate this space vehicle to get to the moon and he could do it. He would’ve been shown once how to operate that Indian Lander, he would’ve got it and he would’ve made it land. He’s a very annoying person like that.”

The Mark of Cain, with support from Messthetics, play at the Factory in Sydney on October 18 and the Corner in Melbourne on October 26. Tickets now on sale.