Dixie D’Amelio may have gotten her start on TikTok, but she’s destined for big things. Needless to say, D’Amelio is one of the most popular influencers on the app, and in 2020, raked in over $3 million from sponsorships and merchandising rights.

In addition to capitalizing on her TikTok fame, D’Amelio is a rising star in the entertainment industry. She has released three singles in 2020, including “Be Happy,” which has over 100 million views on YouTube. You might think that all the hard work D’Amelio is putting in doesn’t leave a lot of time for her to be a normal teen, but you would be wrong. Drama is part of the Hypehouse brand, and D’Amelio is embroiled in it, especially when it comes to her ex-boyfriend Griffin Johnson.

For context, Johnson and D’Amelio dated in 2020, but by the fall of that year, they split … and it was messy. D’Amelio was dating someone new, and Johnson– who was single –took the opportunity to publicly share the nitty-gritty of their relationship; like his theory that D’Amelio “cheated on him,” with Noah Beck, per Seventeen. Things only got worse from there.

Intrigued? Good, because we’ve got all the deets on D’Amelio and Johnson’s relationship below!

Things got messy between Dixie and Griffin 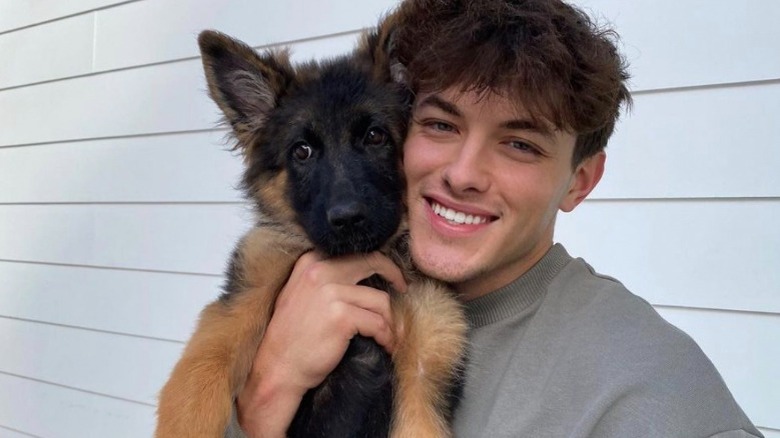 Young love ain’t easy, and Dixie D’Amelio and Griffin Johnson are no exception. To make a pretty complicated story as simple as possible. D’Amelio and Johnson broke up because D’Amelio suspected he was cheating on her. But after the breakup (as previously mentioned), Johnson came out and said he also suspected D’Amelio of cheating, per Seventeen.

In September 2020, Griffin released his song “Convenient,” which was rumored to be about his split from D’Amelio. D’Amelio responded to the song as only a TikTok star can: by posting a series of damning screenshots over the music. The screenshots showed supposed conversations between Griffin and various young women he’d reached out to when he was still with D’Amelio. The videos also included a screenshot of a text from Griffin that read, “I own up to it completely and know that I have done wrong and that I have hurt you in a way that can never be forgiven or forgotten” (via Seventeen). “I do want to say that regardless of anything and my actions have not reflected it, but I do care about you, and this was never a game to me. I am sorry from the bottom of my heart.”

Griffin responded to the post in a series of tweets that seemed to confirm the rumors. “I admit to f**** up. I’m not perfect. God knows I’m not even close, but time for others to admit the same” he wrote.

Griffin and Dixie worked it out … kind of

A few months after all drama between Dixie D’Amelio and Griffin Johnson died down, Dixie released a single “F***boy,” and all eyes were once again on Johnson. At the time, D’Amelio was dating Noah Beck (whom Johnson accused D’Amelio of cheating with, though, per Seventeen, there was “no proof of this”). She and Beck seemed way too happy to inspire a song like that.

While it might be fun to assume that D’Amelio was writing about her split with Johnson, we are sorry to report that was not. In fact, she didn’t even write the song; Olivia O’Brien did, per Seventeen. “It’s a general statement. It’s not about anyone in particular,” D’Amelio explained on “BFFs with Dave Portnoy and Josh Richards.” “I mean, every girl has dealt with a f***boy.”

When asked to elaborate on her relationship with Johnson, D’Amelio said, “It was just a dumb, immature relationship. We shouldn’t have been dating in the first place. We were cooler as friends … he’s just dumb and immature.” Ouch. For his part, Johnson appears to want to make amends. As soon as “F***boy” dropped, he was one of the first to post a TikTok himself staring in the camera and flexing his jawline to his ex’s music.

Who says chivalry is dead?