Fifty years ago today, on August 8th, 1969, the Beatles walked back and forth across a street they knew well: Abbey Road. John Lennon, Paul McCartney, George Harrison and Ringo Starr lined up and crossed a few times, while a cop held up traffic, right outside the studio where they were already booked to show up for work that day. The whole photo session took only 10 minutes. Yet this became their most iconic image: sky of blue, trees of green. It sums up the sunny confidence of the most popular album the Beatles ever made — which also turned out to be the last. Abbey Road turned a zebra-stripe crosswalk on an ordinary London street into holy ground. Oh, that magic feeling.

Fifty years later, the Abbey Road story takes a new turn with the revelatory Super Deluxe Edition, which drops on September 27th in time for the anniversary. It sheds new light on the essential weirdness of this music — how did the Beatles create such warmth and beauty while they were in the middle of breaking up? “It’s the Last Supper,” producer Giles Martin, son of the late George Martin, tells Rolling Stone. “It’s having great sex with an ex-girlfriend. They said, ‘Let’s do one last great thing.’”

The new Abbey Road edition follows the model of the Sgt. Pepper and White Album sets from the past couple of years. And like them, it explores the vaults to find fresh surprises in music you think you already know by heart. It’s the Beatles’ best-selling album  —but it’s also a bittersweet finale from four friends preparing to go their separate ways forever. It’s their farewell — but you can also hear the smiles returning to their faces. The last time John, Paul, George and Ringo played together was when they cut “I Want You (She’s So Heavy).” Yet all four were on fire as songwriters — even Ringo, who contributes “Octopus’ Garden.” The music has a childlike warmth. “Abbey Road is a kids’ album,” Martin nods. “Come Together’ is a blues groove — but it’s also my 11-year-old daughter’s favorite Beatle song.”

There’s a new mix from Martin and engineer Sam Okell in stereo, 5.1 surround sound and Dolby Atmos. There’s a coffee-table book with Paul McCartney’s foreword. There’s also 23 outtakes and demos to enhance the original album. Compared to Sgt. Pepper or the White Album, the sessions were orderly and civilized. George Martin, still wary after the madness of 1968, agreed to come back and produce only if they promised to be on their best behavior. So these outtakes don’t include the same kind of far-flung studio experiments. “They’re not really jamming,” Giles Martin says. “It’s not like the White Album — with this record, maybe to protect against arguments, they had a pretty damn good idea about the direction each song was going to go in before they recorded it.”

In early 1969, the Beatles tried to make Get Back, the album that turned into Let It Be. It turned into open warfare, nearly ripping the band apart. It was Paul who talked the others into giving it one more go. “They came in knowing that this was the end,” Martin says. “There was never the illusion that this was going to be the big start of something new.”

But since these four boys were the Beatles, they couldn’t stop showing off — for each other, for the world, for themselves. So facing the final curtain just fired up their competitive edge. “There wasn’t that element of continuation: ‘We’ll put it out, then do something else.’ It wasn’t the White Album, where it feels like, ‘This is where we are right now, and where we’ll be in six months time, who knows, but we’re on this journey and this is part of the journey,’” says Giles Martin. “They knew this was it. The way I would explain it is, you’ve only got a certain number of breaths or heartbeats left in your life, and you want to make sure they’re important. That’s the essence of Abbey Road — they knew how important it was.”

In a previous unheard version of “I Want You (She’s So Heavy),” the Beatles bash away at John’s heaviest riff in Soho’s Trident Studios, at top volume. But this posh address is a little different from Abbey Road — the session gets interrupted by neighbors complaining about the late-night noise. Surprisingly, John agrees to turn it down, after one more take. He tells the band, “The loud one — last go. Last chance to be loud!” Martin says, “It’s so funny — he’s so polite. He should have said, ‘Fuck off, we’re the Beatles!’”

The studio banter brings the sessions to life — even at this late stage, the lads can’t resist trying to crack each other up. When it’s time for a coffee break, one of Paul’s ballads turns into “You never give me your coffee.” John plays around with “Polythene Pam,” sneering, “His sister Bernice works in the furnace.” “I like trying to find as much speech as possible — it humanizes it,” Martin says. “You hear John Lennon talk, then he suddenly starts singing, and you think: It’s that fucking simple? That’s all I have to do? He just starts singing and it makes the sound of John Lennon? There’s no process there? It’s the same microphone? There’s no switch being turned? I think that changes it. You listen to “I Want You (She’s So Heavy), when they stop and start talking. Wait — these people are making that noise?”

The extras also include Paul demos for two hits he gave away — “Goodbye” for Mary Hopkins and “Come and Get It” for Badfinger. There are three takes of “Her Majesty.” (But if you’re among the many fans who consider “Maxwell’s Silver Hammer” a pataphysical gaffe, don’t necessarily get your hopes up that Take 12 will change your mind.) Maybe Ringo couldn’t have written “Octopus’ Garden” without a little help from his friend George — but he still deserves an eight-tentacled round of applause.

The Quiet One brought in only two tunes — as John sniped in NME at the time, “George has got songs he’s been trying to get on our records since 1920.” But they turned out to be the best-loved highlights, “Here Comes The Sun” and “Something.” In fact, George might deserve the credit for the album’s quality — he threw a scare into the others. “They’re pretty bloody big songs,” Martin says. “It must have shaken things up for John and Paul — they were nothing if not competitive. There’s no question that the catalyst for their demonic level of songwriting here was ‘Something’ and ‘Here Comes the Sun.’”

They’re not at all like George’s White Album or Pepper songs — they’re broad, emotionally direct, not the least bit quizzical. (For that matter, they don’t sound like the solo songs he was already demoing for All Things Must Pass.) But in itself, that’s a sign he was leaving the Beatles behind. After his bitter experience trying to get them to play “All Things Must Pass” at the Get Back sessions  —John responded by ignoring him and plucking a Chuck Berry riff until George stormed out — he wasn’t bringing them his personal cosmic riddles anymore. As Giles Martin says, “He was planning his solo album. He knew what his next plan was. He was definitely fed up with life with John and Paul. And the Beatles didn’t function without John and Paul functioning.” 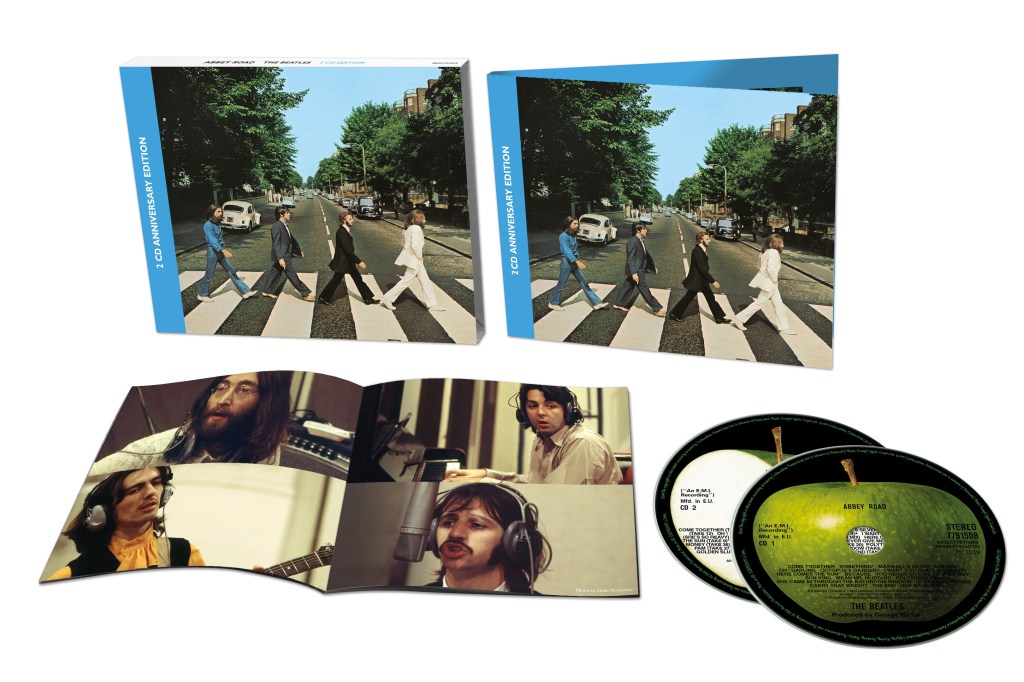 John was also stretching himself — he added the harmony ballads “Because” and “Sun King,” as if he knew this was his last chance to write songs for these three voices to sing together. These are Beatle songs, very different from anything he’d write for himself and Yoko to sing. For John and George, this was their last chance to be Beatles; instead of battling for self-expression, they came together. For “The End,” all three trade off guitar solos, tracking it live — Paul, George and John, in that order.

As on the Pepper and White Album sets, Ringo nearly steals the show. His drums have their own track, for one thing — crazy as it seems, this was the first (and only) album the Beatles recorded on eight-track, a little late in the game. “It’s much bigger-sounding — eight tracks, a transistor desk. It’s the only Beatles album that was recorded in stereo — there’s no mono version.” Giles Martin points out a sonic detail that jumps out from the new mix of “Something”: you can hear Paul play the high-hats in the middle eight. “Ringo is playing toms with both hands, and then in the middle bit, Paul goes over to hit the high-hat. It took the two of them to play drums on that bit.”

But for all the team spirit on Abbey Road, there’s something wistful. Paul’s sense of loss is all over the Side Two suite, right up to “The End” itself. “You do get the impression with Abbey Road that Paul was trying to hold on to the dream — and my dad as well.” Giles makes the argument that it resembles George Martin’s subsequent work rather than theirs. “Sonically, it’s more like his work with [the band] America. Abbey Road has that precision — everything’s in tune, it has the right fit, and that’s how he liked things to be.”

But the Beatles and their producer were heading into the unknown — as if cramming in all the experiments they knew they’d never get a second chance to try together. In the middle of Side Two, Paul sings, “Soon we’ll be away from here / Step on the gas and wipe that tear away.” On Abbey Road, all of them sneak a look back at the past they’ve shared. And then — walking as boldly as they do on the album cover — they cross the road into the future.