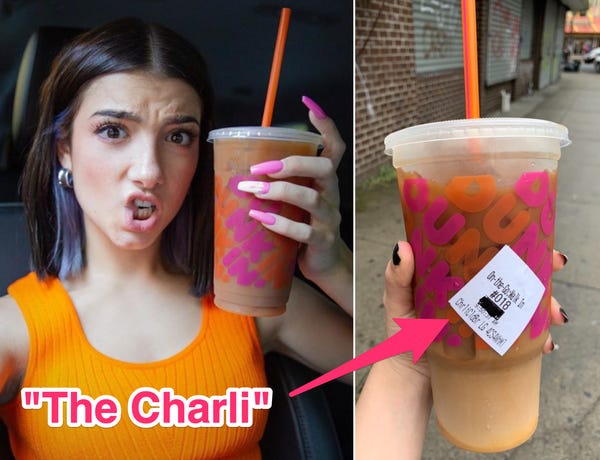 TikTok star Charli D'Amelio has made her coffee loyalty clear to her 80 million fans on the app (as well as her dozens of millions of fans across platforms) for months. D'Amelio's love for Dunkin' Donuts' cold brew has been such a strong facet of her personal brand that her fans affectionately refer to the pairing with the name: "Chunkin."

D'Amelio's unsponsored pro-Dunkin' posts have netted the company over 294 million free TikTok views, Business Insider previously reported. In exchange, the teen previously got her own Dunkin' merchandise and the company sent her a custom cold brew tap for her home.

But on Wednesday, D'Amelio and Dunkin' announced they were making the partnership official. D'Amelio debuted "The Charli," her own custom menu item, which is her favorite cold brew recipe. Fans can order "The Charli" on the app, which is just what this reporter did the morning of the debut.

The presentation of "The Charli" is charming, with fun social media branding and a little thrill that accompanies the Instagram-friendly "ChrliCldBr" sticker that appears on the drink. But the recipe is, understandably, something a 16-year-old would sip for a sugary treat, and not an everyday morning pick-me-up.

"The Charli" is D'Amelio's first official Dunkin' Donuts partnership, which her fans have affectionately nicknamed "Chunkin." 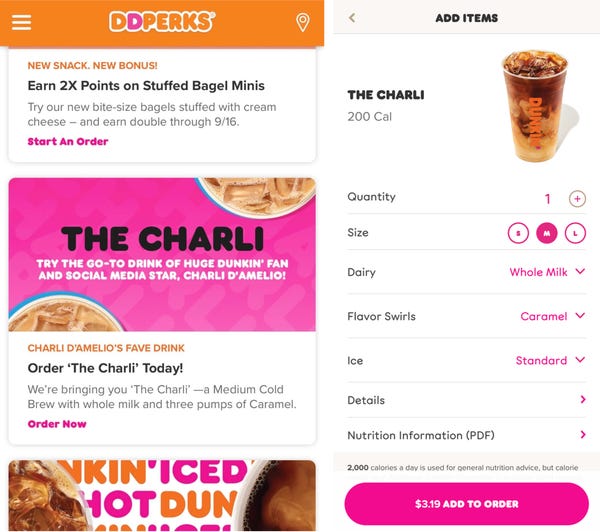 D'Amelio's fans can only get "The Charli" on the Dunkin' app, which is a clever way to force non-Dunkin' lovers to download it and set up an account, which I did this morning. On the app's front page I immediately spotted "The Charli," which is featured prominently.

In the time of COVID-19 precautions, it makes sense that the only way you can access the drink order is from afar, but as a Starbucks mobile order regular, I was a little disappointed with the experience. The Dunkin' app malfunctioned repeatedly on me and wouldn't process my payment, so I had my roommate use hers to get me "The Charli."

At the store I didn't encounter any issues, however, and it just took me a few minutes to obtain "The Charli," complete with the fun custom order sticker.

The drink itself isn't a new creation, but is modeled after D'Amelio's favorite order, which is a cold brew with whole milk and 3 pumps of caramel flavor. 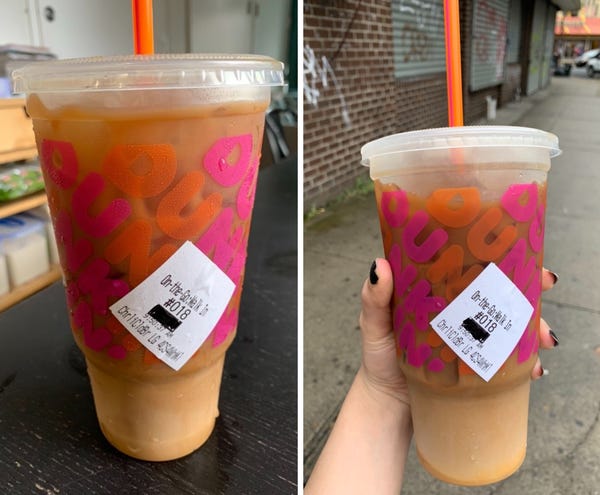 Dunkin' didn't go out of their way to create a brand-new item for D'Amelio, but the recipe is apparently modeled off how she orders her cold brew. A medium-sized "Charli" is 200 calories and is the standard cold brew with whole milk and 3 caramel flavor shots, which costs $3.19 (no upcharge from how much the order would normally cost).

I, perhaps being overzealous, got a large, which brought my total to $3.39 and 260 calories, according to the app. I checked the online nutrition label for the Caramel Swirl, which the drink has 3 pumps of (mine probably had 4).

Each pump has 50 calories and 12 grams of sugar, so a medium "The Charli" has 36 grams of sugar — more than what the American Heart Association recommends an adult woman consume in one day.

"The Charli" has just 200 calories but 36 grams of sugar, and it tastes like sweet leftover cereal milk. 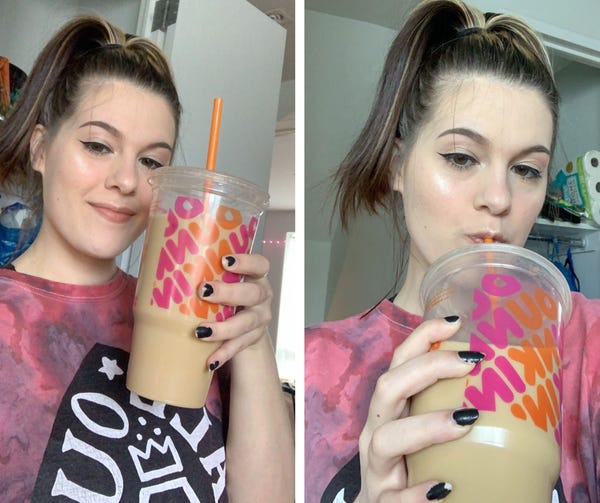 I love iced coffee, especially cold brew, and I like coffee with whole milk and caramel flavors. So by all means, "The Charli" had a good flavor profile. It's just that there's such thing as too much of a good thing, and with this drink, there's just a lot of everything.

Iced coffee is much easier to drink quickly than piping hot coffee, so I drank my entire large "Charli" in less than an hour. The amount of caffeine and sugar I processed became physically alarming about halfway through, and I felt like what I can only describe as "the hype" — the slogan D'Amelio has become known for — coursing through my body.

Taste-wise, it's incredibly sugary. My roommate took a sip and described it as "leftover cereal milk with added sugar," which I'd say is accurate. I didn't dislike it whatsoever but considering the physical effect of that much caffeine and sugar I'd probably never order a large again, and I'd be reticent to regularly order something like this, even in smaller sizes.

The experience of drinking "The Charli" can best be described as a sugar high, but the real draw is fan loyalty to D'Amelio. 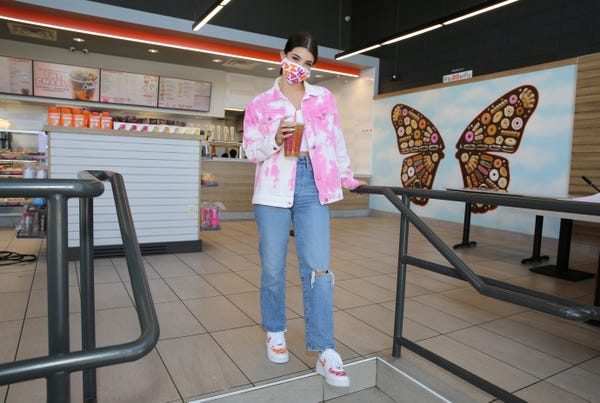 Sugar and residual shaking aside, I completely understand the appeal of "The Charli." The fact that D'Amelio loves Dunkin' so much is a huge bonus for the brand, which didn't have to do anything for "Chunkin" fever to originate naturally. In terms of TikTok's elite influencers and their marketing, Dunkin' Donuts won out.

As someone who casually and professionally follows D'Amelio, I can attest to the power of her endorsement. She drinks and hypes up Dunkin' constantly, and I now naturally associate the two — more than any other TikTok sponsorship. The fact that D'Amelio made that association happen for free is an incredible gift to the brand.

It's only right that "The Charli" exists, and while I probably won't order it in the future, I'll continue to think about Dunkin' as a solid alternative coffee chain to my beloved Starbucks, and the brand feasibly has D'Amelio to thank, at least in part, for that.