Scooter Braun and his wife of seven years, Yael Cohen Braun, have split. Page Six broke the news on July 10, just four days after Scooter posted a touching tribute to his wife on their July 6 wedding anniversary. In the Instagram post, he stated that even if Yael had only given him their kids, she would have “given me everything.” The record exec who manages Ariana Grande, Justin Bieber, and Demi Lovato credited Yael in the message, saying, “But thanks to you I have grown, I have been pushed to be the best version of myself and to continue growing and learning. That all happened because you came in to my life.” He told her that he loved her and wished her a happy anniversary.

Perhaps the first clue that there was trouble in paradise was Yael’s cryptic reply. The 34-year-old South Africa native left the gushing for everyone else and kept her response concise. “A team 4lyfe,” she replied before adding two double-heart emojis. The F**K Cancer founder didn’t wax lyrical about the day they pledged their lives together when she made the obligatory acknowledgment of her spouse’s post.

When the news broke that they were taking a break from their relationship, fans were shocked that the parents-of-three had hit a rough patch. The outlet reported that despite the hard times, “they’re friends” and had no plans to divorce. Now it seems as if Scooter may have been having problems for a while. 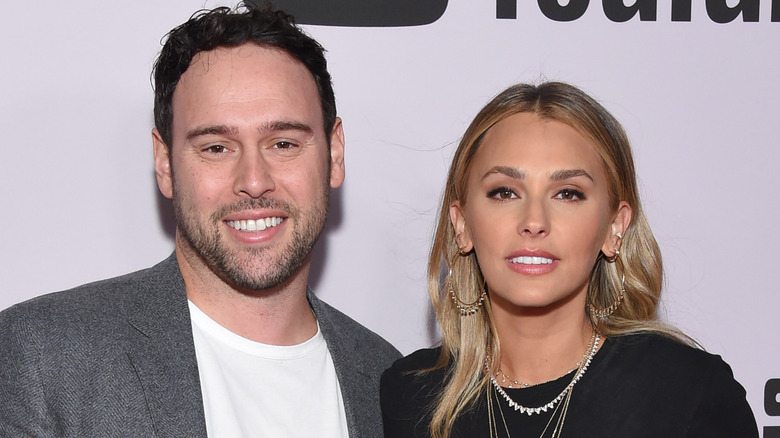 Scooter Braun has been doing some soul-searching. The music mogul appeared on Jay Shetty’s “On Purpose Podcast” in June and confirmed that he had attended the Hoffman Process. The program promises “transformation & development for people who feel stuck.” He told Shetty (via Page Six), “My wife and I began to hear all kinds of rumors, like ‘[Scooter] has gone crazy.’ But it wasn’t that. It was just feeling like I wasn’t present in my life, and [feeling] like the people around me who loved me, I felt their hurt.”

Scooter got vulnerable in the podcast and shared what was going on in his life at that time. “Because, one, we’re all coming in with our own trauma, and weirdly our trauma was matching up, and … I couldn’t fix it. And I’m a fixer.” He continued, “Since I was a kid, I was the guy who was going to make it OK for everybody. And I just couldn’t fix things in this moment in time.” So, he put his brave on and got help when “a very dark thought came into my head — the ultimate ‘I’m not enough;’ the ultimate ‘I shouldn’t be here.'” Fortunately, he realized that he had “never gone that dark. And I signed up for the Hoffman Project the next day.”

If Scooter was willing to do some introspection, then maybe he and Yael Cohen Braun are ready to work on their relationship too.