The World Taekwondo demonstration team may have missed the 2021 Tokyo Olympics, but they did earn Gold on the Olympics of talent: NBC’s “America’s Got Talent.”

“We were invited to perform at the Olympics but unfortunately we could not do it due to COVID,” the group said Tuesday, referring to the global pandemic that postponed the Olympics by a year. (Tuesday’s episode was shortened to one-hour due to the U.S. Olympic Swimming trials.)

Simon Cowell responded, “So you could say you chose us over the Olympics.”

When the World Taekwondo demonstration team took center-stage, it was evident why they scored a coveted invitation. The taekwondo athletes captivated the judges and audience with a high-flying display of strength and discipline. 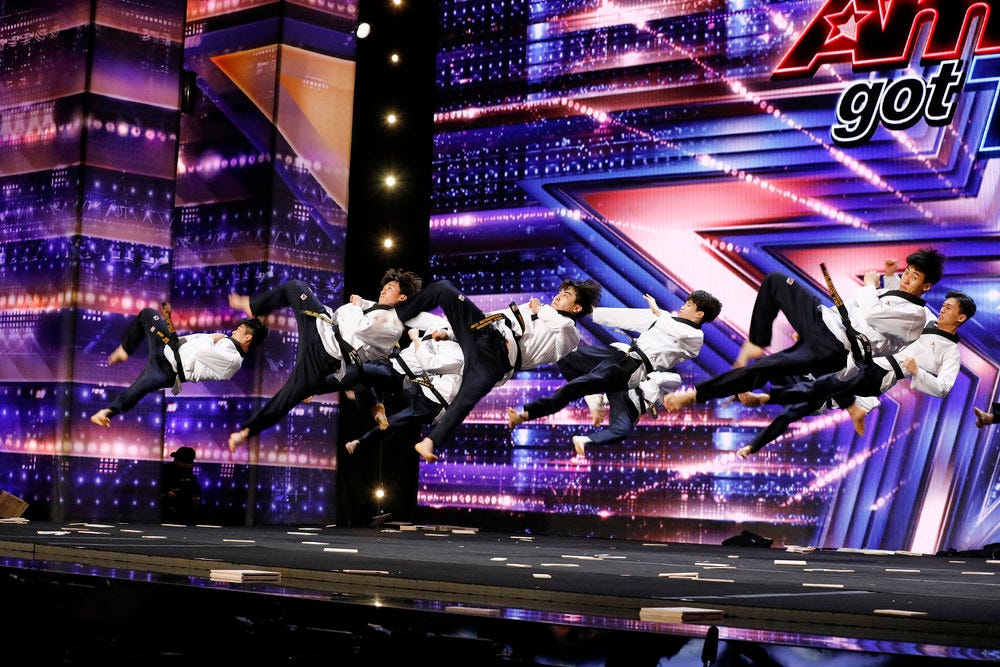 The World Taekwondo demonstration team may have missed the 2021 Tokyo Olympics, but they did earn Gold on the Olympics of talent: NBC's "America's Got Talent." (Photo: NBC, Trae Patton/NBC)

They combined action sequences that looked straight out of a Hollywood big-budget film with intricate skill to break dozens of difficultly-placed makiwaras (wooden boards). They ended their performance with a banner that read: “Peace is more precious than Triumph.”

Cowell called what they did “one of the most extraordinary things I’ve seen in all the years I’ve been on ‘America’s Got Talent'” (and that’s saying something since Cowell created the series in 2006.)

“I’ve never seen anything like this in my life,” Howie Mandel said. “The discipline that is involved, the message you have, amazing.”

Host Terry Crews was so impressed that he gave a review of his own, a first for him this season.

“This is not about fighting. It’s about courage. It’s about confidence and respect. And I respect what you guys did out here today like no one else,” an excited Crews said. “You were not able to make it to the Olympics and get a gold medal, but I am going to give you something golden right now.”

Crews hit the Golden Buzzer, sending the World Taekwondo demonstration team straight to the live shows. The group of world athletes, from South Korea to the United States, embraced each other as they jumped up and down under golden confetti.

Regardless of the outcome, Mandel said “I’d go buy tickets and see that anywhere.”

“America’s Got Talent” returns next week to it’s normal time of 8 p.m. EST/PST on NBC.