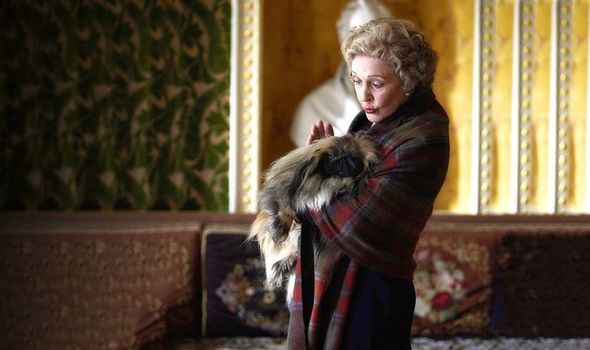 JILL Clark settles down on her sofa and within seconds a gaggle of creatures great and small make a beeline for her, all desperate to perch on her arm, sit on her lap or lounge at her feet. A bearded dragon lizard called Doughnut runs up her leg as Barney the owl swoops on to her right hand while a familiar-looking Pekingese (of whom, more shortly) snuggles up, much to the annoyance of a couple of naked cats who once made James Bond wince.

“I can’t even have a second for a cup of coffee,” laughs Jill among the chaos of fluff and feathers.

Few film lovers or television viewers have any idea who Jill is but as one of the country’s leading animal trainers she has brought a veritable stable of animal stars to the big and small screen.

“Doughnut, who’s running up your arm now, is a regular in EastEnders,” she says. “He’s the lizard pet of the Miller family and he even has his own tank on set.

“Those naked cats, Lexi and Mousca, were in the Bond film No Time To Die, in scenes with a baddie. Barney is being trained and has a big future on screen.

“Owls are so beautiful and he’s very calm and intelligent, so he’ll be fine.

res “And Derek the Pekingese, well he’s a bit of a scene stealer in All Creatures Great And Small where viewers know him as Mrs Pumphrey’s pet, Tricki Woo.”

The moment Derek – who starred alongside the late Dame Diana Rigg and is now the sidekick of her successor as Mrs P, Patricia Hodge – hears his name he instinctively looks around in search of a camera, clearly the hallmark of a natural performer, and then makes himself the centre of photographer Chris Frear’s attention.

“His elderly owner died and I took him in from her sister who was looking for a good home for him and you just can’t help but love him,” explains Jill.

“On set the actors joke that he must have read the script because he knows exactly what to do. His temperament is so calm and easy going, just a joy to work with.

“He’s very good at playing anaesthetised. He normally makes a bit of noise breathing but for those scenes he suddenly stops making the noise. It’s incredible to see.”

Tricki Woo is due to play a big role in the Channel 5 Christmas special but Jill can’t give the storyline away. She will say that, “Viewers warm to Tricki Woo very quickly and so he’s becoming quite a star. When Diana Rigg played Mrs Pumphrey, she just loved him and it’s the same with Patricia Hodge. He’s got one of those really expressive faces.”

Derek disproves the showbusiness maxim about never working with animals or children, along with many of the other animals sharing Jill’s two-and-a-half-acre training school and bungalow home deep in the Lincolnshire countryside.

Out in the yard, Jill’s animal magic is obvious the second she walks through the gate and into their world.

In a flash she is surrounded by three donkeys – George, Daphne and Jenny – who, like Derek, have proved popular in All Creatures. Daphne and Jenny also appeared in The Larkins, the ITV hit Sunday night comedy drama featuring Bradley Walsh as happy-go-lucky Kent farmer Pop Larkin.

Jill chats to her animals all the time, strokes their faces and makes them feel special. She doesn’t raise her voice but somehow they instinctively know what she wants them to do.

“Can you just stop for a moment for a picture?” she asks the donkeys in a placid voice.

Within seconds, the previously frisky animals dutifully pose for the camera.

It’s the same with her pony Tink, who has done some television work with chef Jamie Oliver.

“Animals don’t understand big long sentences but they do understand words so I tend to use words or short sentences,” says Jill. As she chats, a red deer, Flora, nudges her back, seemingly feeling left out of the latest shenanigans. “Oh this is my baby, my little darling,” says Jill.

“Her mother was killed when she was very young and so when she came to me I bottle fed her. I talk to her to settle her.

Flora’s done a Swiss beer advert and was in the film Jurassic World, where they put some antlers on her with special effects.

“Her sensitive nature comes over well in film. If I leave the back door open, she’ll come into the bungalow to see what is going on. She thinks she’s human.” Jill’s helper Emily Anstiss, 28, adds: “Flora knows when Jill is away and she can pick up when she is within a mile of coming back home. The communication between them is uncanny.”

What is also rather unusual is how easily all the animals get on with each other.

Her two sheep, Dolly and Freda, are like sisters to Flora, and Keith the Angora goat is a kind of big brother figure to them all.

Along with nine ducks, a swan, 30 chickens, four rabbits (some of whom appear in

Call The Midwife) Jill has 13 doves (great in film backdrops) and a canary but says her 14 geese are the easiest to work with on set.

“The secret of working with geese is not to get into their space,” she says.

“You just have to be on the outside of that space and gently encourage them to go where you want them to go. Geese are brilliant to work with.

“They move around so well together. You never tire of watching them.

“I’ve just got two ravens to train up and they are absolutely nuts.We call them Marty and Michael but I think it should be Mischief and Mayhem.”

Unsurprisingly, her 16 cats get on well with her beloved basset hounds, Bridget and Belinda, a lurcher called Delilah, Frank the sausage dog, Patsy the Jack Russell, rescue dog, Ruby, Ernie the Golden Retriever (Jess in All Creatures), Bobby, a cocker spaniel (Scruff in All Creatures), and a dalmatian called Angelica.

Despite being around animals all the time, Jill has only been bitten a few times. She was, however, nearly killed by a reindeer but even that proved fortuitous. “I was going to get some wire which got caught up in his antlers in the rutting season and he went for me and butted me very hard,” she recalls.

“He could have killed me with those antlers but I grabbed them and hung on while he dragged me around. Eventually I got a rope around him.

“When I got to hospital they patched me up and discovered a lump and told me I had breast cancer. I didn’t even know I was ill.All thanks to the reindeer. That was a few years ago and I’m fine now.”

What is happening where you live? Find out by adding your postcode or visit InYourArea

Jill has endured a few setbacks in her life and throughout all the traumas she’s found comfort from her many animals.

She was born near Caracas in Venezuela where her late father, Jack, was working in the oil industry. She nearly died from pneumonia aged one and after returning to England her mother, Rosemary, left the family when Jill was a toddler.

Home was a large detached house in

Surrey. Jack invited his sister, his brother-inlaw and their son to move into help look after Jill and her brother and sister. “It was like theWaltons,” recalls Jill.

When she was 13 her father bought her a pony, Sunny Boy, and she loved to spend time with him. “I felt happier among animals,” she says. “I just liked being with them.”

After leaving school she trained as a secretary and found the ideal job working for the RSPCA in Putney, south west London, where she met the man she would wed but the marriage ended after they had a son, Dean.

Jill also suffered a nasty accident with an outdoor fire which caused 35 per cent burns, requiring some 40 skin graft operations over 16 years. Being a single mum with long-term pain and no job was hard but a turning point came when she found work with a film company supplying animals for blockbuster films such as The Bounty, starring Mel Gibson and Legend with Tom Cruise.

Sensing she had a way with animals, she set up her own company, 1st Choice Animals and has never looked back. She moved the business to Lincolnshire in 2014 and her son

Dean runs a farm near HighWycombe, training and caring for horses, cattle and other large animals which appear in films.

Danika, Jill’s daughter from her second marriage, has five children, who love to spend time helping their grandmother, along with Dean’s daughter.

“Animals have always been a constant in my life,” says Jill. “I have an affinity with them and I have an ability to get them to perform. I always tell them I will never take them anywhere where they will not feel safe.

“They understand that and trust me.That’s why we share such a happy home.”

As she chats in the yard her other helper, Karen Becskehazy, is nearly being pulled off her feet by the resident pig, Thelma Louise, who is getting a bit restless. Taking the pig’s rope, Jill says calmly, “Come on Thelma, take it easy girl.”

In a second or so, she has Thelma literally eating out of her hand and posing for pictures.

The All Creatures Great And Small Christmas 2021 Special airs at 9pm on Channel 5 on Christmas Eve.