Carol has been conducting her weather forecasts in Wimbledon this week to coincide with the world tennis championships, and BBC sports reporter Sally Nugent has also joined her along the way on BBC Breakfast.

Today the 57-year-old was chatting with some of the staff behind the scenes when Steph, 37, couldn’t resist teasing her for her interviewing tactics.

Donning a figure-hugging long-sleeved red dress in keeping with the tone of the prestigious sporting event, and sporting her signature blonde tresses in a bouncy curly style, Carol began her report from a restaurant.

“Good morning Rob, this is your first year of doing this how’s it going so far?” the weather reporter then asked, and the pair chatted about his work on the event.

“It’s going really really good and you know, what a great place to work,” Rob shared. “This is for the competitors, and we do lots of great food here throughout the whole day focusing on their nutrition, you know, so they can et the best result on the court.”

The chef then talked about the chicken and mushroom pasta he was cooking up, and he stunned the host by revealing he gets through about “100 kilos” of pasta a day.

Carol then joked: “Could you rustle up a few pancakes for us while I do the weather? That would be very nice,” which left Steph giggling in the background.

“No problem at all,” the chef responded with a grin, and Steph was soon unable to hold her tongue any further.

“Before I go I’m just going to see how Rob’s getting on with our pancakes…” Carol grinned when her forecast was over, turning back to Rob. 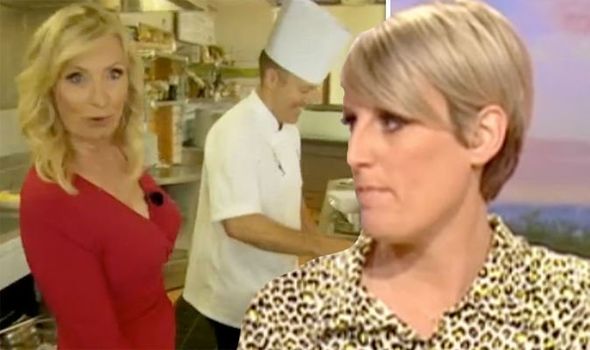 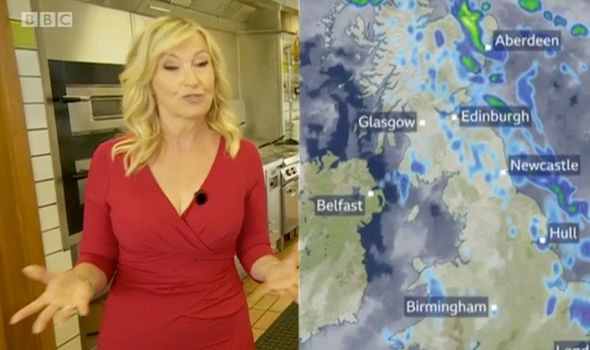 I tell you what Carol, are you going to flirt your way round Wimbledon?

“It’s not looking promising I have to say Rob!” she scolded, before adding: “Well it does look good, Steph and Charlie don’t you just wish you were here?”

“Aaah I certainly do it looks gorgeous,” Steph enthused. “I tell you what Carol, are you going to flirt your way round Wimbledon?

“You were hugging the florist earlier, now you’re asking the chef what time he finishes!”

Utterly astounded by the presenter’s comments, a hysterically laughing Carol cried: “Steph you have got no shame!”

But it didn’t faze the weather reporter too much, as she was more concerned with adding ingredients to the chef’s pasta dish. 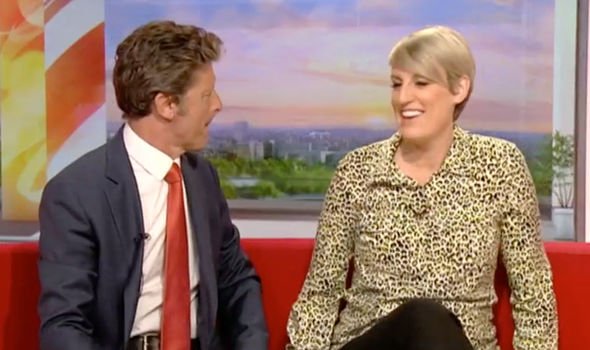 “Add a few chillies… might as well… in for a pound,” Carol joked, and Steph and Charlie shook their heads in dismay.

“Right we’ll leave you to it!” Steph laughed.

Earlier this week Louise Minchin responded to a fan’s queries on Twitter about her behaviour towards her co-host Dan Walker.

The viewer was puzzled after witnessing what appeared to be Louise repeatedly turning her back on Dan, but Louise has hit back.

BBC Breakfast continues weekdays at 6am on BBC One.