There are many delights in “Brian and Charles,” the Sundance crowd-pleaser that tells the story of a lonely inventor and the robot he builds to keep him company, but one of its greatest is the attention to detail evident in every location inhabited by the characters. The charm and earnestness of the performances and screenplay are deepened and expanded by sets and props that tell a lifetime’s worth of stories; when we enter Brian’s cluttered home, overflowing with homemade contraptions and vintage furniture, there’s an enveloping sense of his uniqueness as well as his isolation — an isolation more keenly felt and ironic given his warm surroundings.

To create Brian’s house, production designer Hannah Purdy Foggin took her lead from both the script and the real Welsh farmhouse that was used as a set. “It was such an inspiring place,” Foggin told IndieWire. “We went in and immediately the history of the family that lived there was everywhere. You saw the generations of this rural family’s life, and because it was so rural — the location manager did an amazing job finding it — you could see how that could directly relate to Brian and who he was, having lived in that isolated environment.” Foggin and her team added to the layers that were already there, bringing in lovingly handmade props and furniture intended to give a sense of both history and decay to show what Brian needed to overcome.

One of Foggin’s key design concepts came from the short film that served as the source material for “Brian and Charles.” “There was an image in the short of Brian sitting in an armchair that was just a little too big,” Foggin said. “It felt almost like a cartoon, and it really sparked with me.” Foggin took the idea and ran with it, surrounding Brian with objects that were either slightly too large or slightly too small, subtly manipulating the scale of Brian’s world so that the audience would never get entirely comfortable in the world. 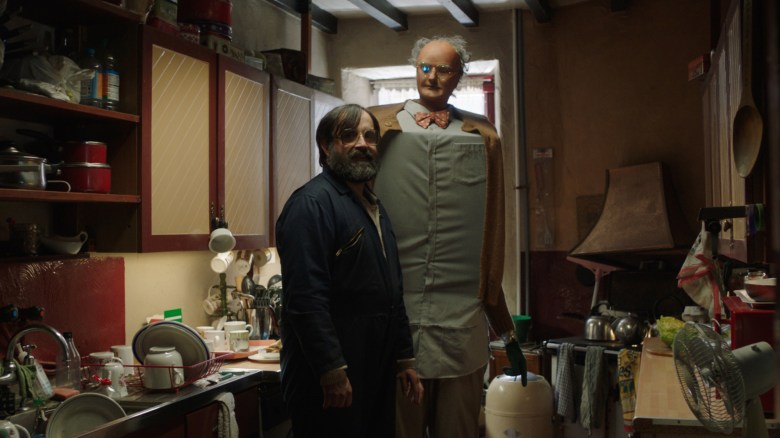 The most fascinating and hilarious objects in Brian’s home are his lo-fi inventions. Foggin collaborated with head prop maker Martin Butterworth to build gadgets that included a flying cuckoo clock, shoes with fishing nets, and a belt to carry eggs. “We just went crazy,” she said with a laugh. For Butterworth, “Brian and Charles” was a dream job that built on “a lifetime of hoarding components.” “Keeping them in my workshop, having no idea what any of them do, just hoping one day there would be a use for them,” he told IndieWire. Working with Gareth Pinder, Kim Thackeray, Lois Clapcott, Alexis Baguley, and the rest of his team at Do Not Bend Productions, Butterworth found that use. “You connect a spring to a wire, and suddenly these things come to life,” he said.

The absurdity of Brian’s inventions is balanced by both the concrete quality that comes from their real parts — in addition to Butterworth’s odds and ends, Foggin scoured second-hand stores for whatever knick-knacks she could find — and the filmmakers’ determination to provide a plausible rationale for how they came into existence. “For a build like the clock, you have to ask, ‘What’s the backstory?’” Butterworth said. “Whose clock was this? Where did the bicycle that powers it come from?”

“We’d just become Brian,” Foggin said. “For every invention we were always trying to think about what we could add to it or how we could amend it.” Placing himself in Brian’s shoes and thinking through the origins of the inventions came naturally to Butterworth and his collaborators. “It wasn’t difficult for me or any of the team to get into a crazy inventor mindset,” he laughed.

While Brian’s house and props — which include his fellow title character, a robot with a washing machine for a body — are the most obviously unique aspects of “Brian and Charles,” Foggin was equally attentive to the living spaces of less eccentric characters like Hazel (Louise Brealey), the introverted Brian’s love interest. “It was important to make Hazel feel more a part of the village,” Foggin said, though for all her contrasts with the isolated Brian their homes did have parallels. “It’s another interior that’s overly layered. But there’s also a cuteness to it — lots of doilies and prints and textures that had piled up over the years.” For Brian’s nemesis Eddie (Jamie Michie), Foggin picked a farm that felt as remote as Brian’s but had an additional element of menace. “I wanted it to feel intimidating and dangerous and rough and dirty.”

Shooting in real Welsh locations in often arduous weather added to the sense of verisimilitude that, as Foggin sees it, grounded “Brian and Charles” amidst all of its fanciful elements. “We were living in this rural environment and meeting the people, and it really felt like the story was part of this place,” she said, adding that the effects were largely in-camera. “When Eddie is dragging Charles’ body, he’s really dragging that thing — everything was weighted, and everything felt immersive and tactile.”

Butterworth added that no matter how long the hours were or how cold the weather got, that tactile quality made the production a thoroughly enjoyable experience. “We were working 15-hour days and dog tired,” he said, “but everyone was full of joy because we were collaborating and getting free rein to create.” Referring to another of Brian’s unusual inventions that plays a key role late in the film, Butterworth concluded, “You can’t get a better buzz than being in a dark cold workshop firing cabbages.”