In the new drama series The Rookie, at the tender age of 40 and retired from running his own construction business, Los Angeles husband and father John Nolan decides the time has come to change his life.

But Nolan takes a seachange of an unexpected kind: he enrols in the police academy and signs on as the oldest “rookie” in the history of the LAPD. 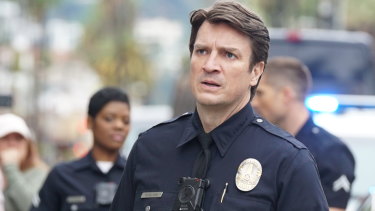 Nathan Fillion stars in The Rookie.Credit:eOne

His off-screen alter-ego, actor Nathan Fillion, is actually 48-years-old. (Television tells such lies.) And the acting gig, which requires a lot of running, is somewhat tough on the knees, Fillion says.

“There was a time when you'd injure something or you'd twist something and I would think, I don't have to worry about that in two weeks, it'll be right as rain,” he says. “That doesn't happen anymore. So now there is just a lot of things I know I won't do. I know where it's going to go.”

The heart of the pitch, he adds, is that The Rookie is not so much a police show as a show about a man embarking on a second act in his life.

In every city where I know people, they send me photos of … billboards and say, well, here you are by my house … it's amazing. It's dreamlike.

“We've seen cop shows before, the stakes are a little higher, the day to day is a little more exciting, but the way into our story is the cultural phenomenon of the do-over,” he says. “Marriage used to be the constant, now divorce is, people start again.

“Our cop show is about a man starting over,” Fillion says. “He's divorced, he's no longer a husband, he's no longer needed as a father figure, his son is off in college and the job that he had was a necessity because he had a family, and there is no longer a family.

“That wasn't his dream job, so he asks himself, what is his dream? What does he want?”

Fillion describes John Nolan as “a man looking for relevance. He wants to matter. He's at a point in his life where he's no longer needed in the husband role, the father role, the job. No one needs him. He's searching for relevance.” 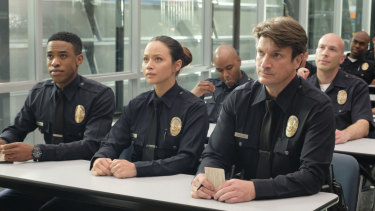 In the Pilot: Small-town guy John Nolan is pursuing his dream of being an LAPD officer. Credit:ABC/Tony Rivetti

His moment comes when he is swept up in a bank robbery during the series' pilot episode, and in the wake of that event, decides to become a police officer. “He was looking at death in the face, he needed some help there and the cops came in,” Fillion says. “That is his path to relevance.

“But the police force likes young people because it can teach them how to react to a situation, how to formulate your thought process,” Fillion says. “John, at 40, is experienced enough to know how to react in certain situations. He's already taught himself and it's not the way they want him. [For them] he's a little too … not so fresh.”

The series is based on the life of a real-life LAPD officer who, like the fictional John Nolan, changed his life and joined the police force. But Fillion says after that broad character outline, the fictional world of The Rookie diverges.

“I have met him, his name is not John Nolan, and after the fact that he made a choice at 40 to become a police officer, and joined one of the two precincts that will take you after the age of 37, we're kind of on our own,” Fillion says. 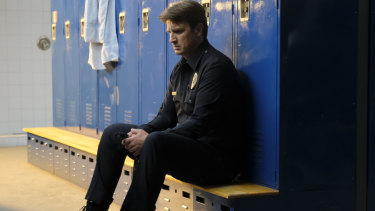 Tough on the knees: Fillion is more aware of his own limitations given his age.

The series is one of the first to use footage taken from the police body cameras worn by the characters. (Unusually, despite the near-ubiquity of such cameras, they seem to rarely take a prominent place in police television dramas.)

“They are a part of the police reality and we wanted to bring that much reality to the show, and it's great,” Fillion says. “We do a number of takes but then we clear out all of the cameras and camera crew and do the scene again but taking what's on the body-cam footage."

And the uniform, he says, makes subtle adjustments to the stance of the actors.

“It's a little bit like wearing a suit, because it pulls your shoulders back a little bit, which can be exhausting by the end of the day,” Fillion says.

“It's wool, which is not very cool. It's hot in Los Angeles so wearing wool head to toe … it's a challenge. And being a rookie you have to wear a tie, so your collar is buttoned up all the way.”

Fillion had worked previously with series creator Alexi Hawley on the long-running mystery series Castle, a detail which he says was critical in deciding to take the role.

“It's about perspective,” Fillion says. “When the audience see the show they're watching 42 minutes of a program but for me that was eight, 16-hour days.

“So my perspective is much different, and when I take on a project, people think he must be looking at the script, and you do, but my thinking is also about what my day to day is going to look like,” he says.

“Working with Alexi Hawley, working with someone you already know, you already know what to expect, you can count on them personally because they're good people,” Fillion says. “You can respect their talent and their experience and be ready to enjoy your day to day.” 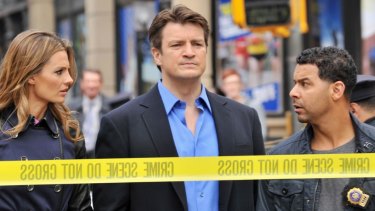 The series has also been sold extensively around the world, with the poster gracing billboards and bus backs from London to Los Angeles.

“The Late Show, with David Letterman, that was a milestone for me. And getting your face on a billboard … I can't remember the first time it happened but I see four of them when I drive home from here and it's a 12 minute drive. It's a little weird,” he says.

“In every city where I know people, they send me photos of bus stops and sides of buses or trains or billboards and say, well, here you are by my house,” he says, laughing. “I feel like it's out there so much at this point I'm going to have to apologise to somebody. But it's amazing. It's dreamlike. I'm proud of it.”