Sitcoms from the legendary producer Norman Lear will stream for the first time under a deal with Amazon Prime Video and IMDb TV with Sony Pictures Television.

The deal will provide the largest volume of Norman Lear complete series content ever available to stream.

According to a news release, classic sitcoms “All in the Family,” “Maude,” “One Day at a Time” and “Good Times” will launch July 15 on IMDb TV, marking the first time that all seasons of “All in the Family” and all episodes of “Maude” are available to stream.

“227” and “Diff’rent Strokes” will launch on Amazon Prime Video July 15 for no additional cost to Prime members, while “The Jeffersons,” “Sanford & Son” and “Sanford” will be made available on Prime Video later in 2021.

“That Sony found a home for that library with Prime Video/IMDb TV where new generations could find it, is the best present a man entering his 100th year can have,” Norman Lear said in the release.

Lear, who will celebrate his 99th birthday this year, created and developed numerous sitcoms from the 1970s to the contemporary era and is widely credited for his commitment to tackle political and social issues in his shows. More recently, Lear executive produced the remake of his original “One Day at a Time” that focused on a Latino family and serves as executive producer and co-host of “LIVE in Front of a Studio Audience…” alongside Jimmy Kimmel. 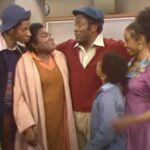 Lear has been recognized as a 2017 Kennedy Center Honoree, a recipient of the National Medal of Arts in 1999, a winner of the Peabody Lifetime Achievement Award in 2016 and as a member of the inaugural group of inductees into the Television Academy Hall of Fame in 1984.