Blind chef Christine Ha won the third season of Fox’s MasterChef in 2012; earlier this year, 11-year-old Ivy Angst, a Little Person with achondroplasia, was runner up on “MasterChef Junior.” Season 1 of the Food Network’s “Guy’s Grocery Games” included wheelchair user Chris Bales among its competitors. The BBC’s “Great British Baking Show” saw chef Briony Williams, born with a limb difference, make it to the 2018 semi-finals; the current season includes Marc Elliott, who started baking as a kind of therapy after he lost a leg in a 2016 motorcycle accident.

Great, right? Until you consider this: Competitive cooking shows dominate the food-TV landscape, with more than 40 series across a spectrum of networks; there are 61 million adults in the U.S. living with a disability. With thousands of episodes, and only a handful of handicapped people, it might suggest that a handicapped, professional chef is something of a unicorn.

“It’s a load of bollocks,” said James Coke. When multiple sclerosis forced him to rely on a wheelchair, he focused on creating healthy meals and created a website, The Disabled Chef. He said the lack of disabled chefs on TV has repercussions far beyond the broadcast. “[A disabled person] is not only representing themselves, but every disabled person out there.”

As with so many cultural shifts, it speaks to a kind of self-fulfilling prophecy. The Food Network reaches over 100 million households, but if no one sees disabled chefs, it’s easy to believe that there aren’t any. (Food Network did not respond to requests for comment.)

Optics aside, it seems like a missed opportunity. Beyond cooking skills, much of the cooking-show audition process focuses on narrative. Elements like anxiety disorders, being a first-generation immigrant, and having a disability all have the potential for backstory, creating dramatic tension and audience empathy.

“The impact that a contestant can have [on] viewers and inspiring them to push themselves and not feel limited in their lives is a powerful piece of the shows we produce,” said Samantha Hanks, VP of casting and talent relations at Magical Elves, the company that produces shows like “Nailed It!” and “Top Chef.” 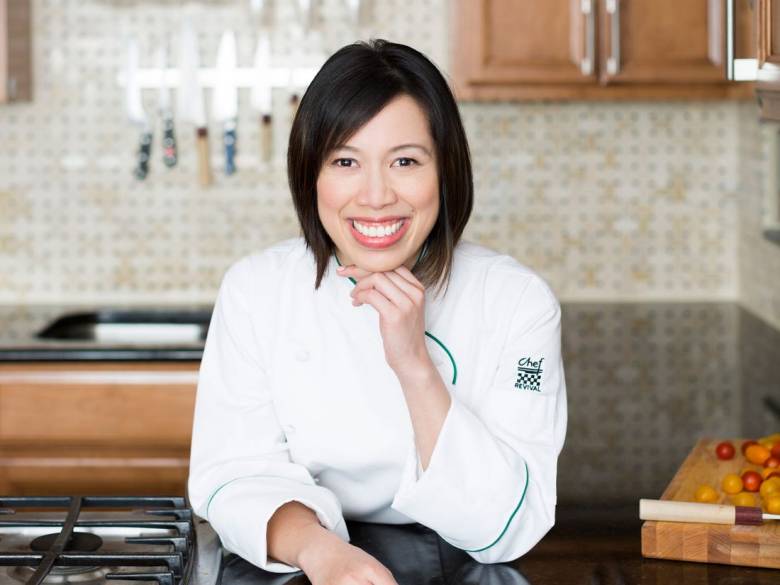 “They thought my story was interesting,” said Ha, who was an adult when she gradually lost most of her vision to an autoimmune disease, Neuromyelitis optica. A self-taught home baker, her family encouraged her to audition for “Master Chef” and her braised pork belly won in the finale.

Ha said that “Master Chef” worked to ensure that “the playing field was level, so as not to give me an advantage but to give me a fair chance,” she said. This included a “sighted guide” who was not allowed to touch her food, but could guide her hands to specific foodstuffs and describe the color of the dish while cooking.

A disability doesn’t necessarily mean a storied culinary career is out of reach. Michael Caines, who lost his right arm in a car accident, is a Michelin-starred UK chef with several restaurants and opened Exeter College’s the Michael Caines Academy – Excellence in Hospitality. Ha now has her own restaurant, Vietnamese gastropub The Blind Goat, in Houston.

“There’s still a lot of barriers and it’s really about changing people’s mindsets and educating them that it can work,” Ha said. “There are a lot of people out there with various abilities who love to cook, who can cook, [but] there just might need to be certain adaptations made.” 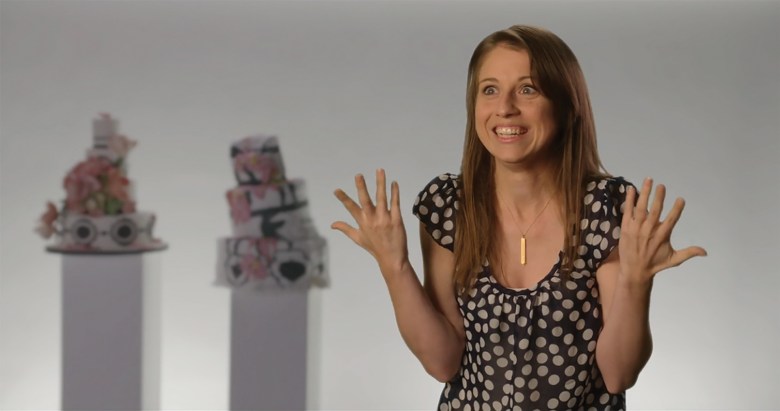 Megan Swanson on “Nailed It!”

Hanks and Magical Elves’ co-CEO Casey Kriley say they haven’t had any physically disabled chefs on their shows because “it hasn’t come up,”‘ says Kriley. The first season of “Nailed It!” did include deaf home baker Megan Swanson, which Kriley called a “no brainer.” Added Hanks, “I brought it to Casey and Jo [Sharon, co-CEO] and said, ‘What can we do?” They brought on Swanson’s partner as interpreter.

Magical Elves also cast 13-year-old cancer patient Fuller Goldsmith, who became a champion on Food Network’s “Chopped Junior.” At 16, he returned for “Top Chef Junior” only this time his cancer treatment necessitated a wheelchair. “He was much smaller and couldn’t stand up for as long as the other kids and needed breaks,” said Hanks. The team adjusted his workspace and gave him more time to rest. (He won that show, too.)

“That’s how we handle any person of any diversity on any of our shows,” Hanks said. “We want to give them an opportunity to be treated as an equal and the best opportunity to succeed on the show.” 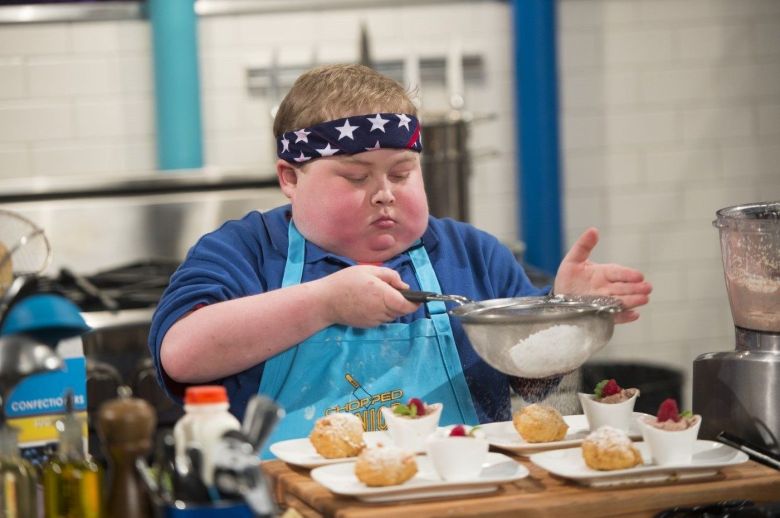 Statistics on chefs and culinary school attendees with disabilities are hard to come by; the Culinary Institute of America’s student handbook has a section on aiding students with disabilities, but it’s in regard to complying with the Americans with Disabilities Act required by all public institutions. As far as culinary careers go, the door is open, but may not be wide enough to accommodate a wheelchair.

Maegan Blau, owner and lead designer of Blue Copper Designs, designs kitchens for those with limited mobility. Blau, who also uses a wheelchair, said a set decorator would have a different set of challenges since those kitchens aren’t meant to be permanent. It’d be about “retrofitting or installing conventional materials or appliances in a way that is more accessible to the user.”

Cooking-show sets are far larger than professional kitchens and can be customized for disabled chefs. On “Guy’s Grocery Games,” wheelchair user Bales carried a shopping basket on his lap and had an an altered workstation. Ha said her audition accommodations opened up conversations with producers, and last-minute changes were common. “It is a lot to think about when you can’t see,” she says. “You’re trying to process everything in your head and do everything by memory.”

If a contestant with a physical disability was on a Magical Elves production, Kriley says, there would be in-depth talks with production to alter a workstation to make it the right height, as well as adjusting the pantry to make everything within reach. 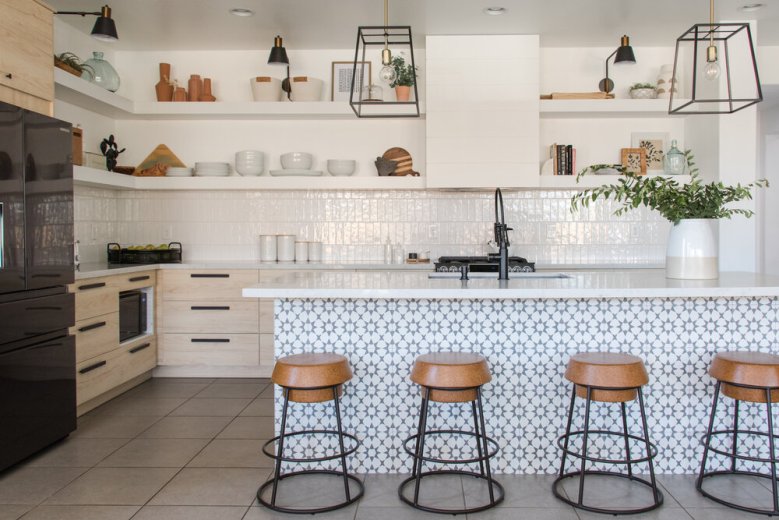 Nicolas Steenhout, a culinary school graduate who owns Inclusion, accessibility and disability consultancy Part of a Whole, says it’s not just about showing disabled chefs in commercial kitchens, but as food truck owners or caterers, all of which could lend themselves and showing that the culinary world — and its cooking shows — aren’t closed off to people with disabilities. “It’s not entirely dissimilar to when women started breaking into the field,” he says. “For decades it was just men, men, men,” he said. “Competitive cooking organizers need to build awareness and spearhead the movement.”