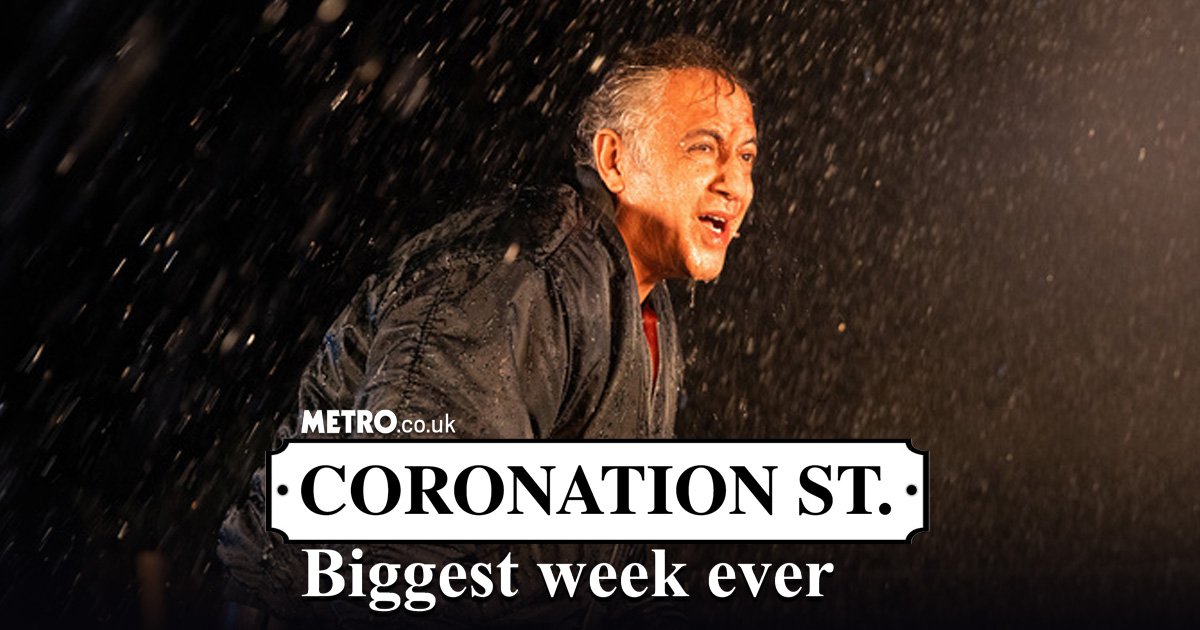 Coronation Street star Jimmi Harkishin has opened up about the horrific events that could see his character Dev Alahan’s son Aadi (Adam Hussain) die in a catastrophic fireball.

Discussing the aftermath, Jimmi insists that Dev doesn’t feel guilty that she saves Asha (Tanisha Gorey) as she was unconscious, but the dad is left in terror that he could lose one of the twins.

The actor told Metro.co.uk: ‘Dev is unconscious and when he wakes up he realises that they have been hit from behind. He is choking and there is smoke in the car, it’s dark, all the lights are off and Dev has had the wind knocked out of him. Aadi is trapped in the front of the car but he is lucid and talking whereas Asha is unconscious.

‘It’s a knee-jerk reaction from Dev – who do you try to get to safety? His daughter isn’t talking, she is not responding and I really do think that is the only thing that Dev could have done.

‘It wasn’t a question of choice or favouritism, it was who needed his help more at that time. He had to pull her out and he was going to come straight back for his son but then the car explodes.

‘He doesn’t feel guilty but he is hurt and he is distraught because it is really painful to see anything happen to your children. Dev wishes it was him and wishes he could take his son’s place. It’s an honest pain that he feels.’

Since Asha has been embroiled in some seriously difficult situations, Dev has tried to step up as a father to the children, but as he focused a lot on trying to get things right with Asha, Aadi has felt pushed out.

But Dev insists that it isn’t a case of favouritism where Dev is concerned, even if he doesn’t show it properly.

Jimmi mused: ‘Dev doesn’t favour Asha more at all and as a parent myself, I know you would never allow yourself to think that. I don’t think there is a favouritism thing going on.

‘He looks after, cares about and loves them both but it’s just that his daughter has been going through a difficult period so he thinks that’s why Aadi feels left out but he doesn’t think Aadi is right to feel that way and he doesn’t think there is anything he can do about it.’

It isn’t the first time that Dev has been at the centre of explosive events – who can forget his derranged ex Maya Sharma blowing up his entire empire of shops back in 2004?

But Jimmi was still blown away to be present for the big explosion that airs tonight.

He shared: ‘It really took my breath away. I watched it from a distance and the stunt guy who was playing me, who was taller, younger and much better looking than me, did an amazing job. It was jaw dropping to watch in person.

‘Then you realise, playing your role, what it actually is that you’ve got to respond to in the next scene. Your imagination can’t take you there. It was really good.

‘When the corner shop exploded, with Maya, that was epic as well but this is amazing. Looking back at the stunt with mad Maya, it was so long ago, I feel like a different person!

‘I love all the character work that you have to do when you have a scene with any of the great actors on Coronation Street but doing stunts, you are on your own and you have to find your way through it.’