On Peacock’s Days of Our Lives: Beyond Salem, a five-episode limited series which premieres Monday on NBC’s sibling streamer, Deidre Hall’s Marlena and Drake Hogestyn’s John Black are on a mission.

Days of Our Lives‘ 10 Best Characters Ever, Ranked


The beloved pair is one of seven couples searching the globe for the fictional and priceless Alamainian gemstones that used to adorn a gold peacock (get it?) until Hope/Princess Gina Von Amberg cat burgled the bejeweled figurine 30 years ago. The Kingdom of Alamainia reacquired the golden bird but when they got it back, all of its six precious jewels — an amethyst, ruby, sapphire, emerald, citrine and orange diamond — were missing.

If the rocks and their retrieval sound a little like Thanos’ coveted infinity stones from the Avengers franchise, Hall says it’s just a fun little coincidence.

“I am an Avengers fan but ours feels more like a caper,” Hall clarifies for TVLine with a chuckle. “No one dies and no one is really scared or hurt. There are moments where maybe we won’t get the gemstones, but all of these exotic locations are great fun and I think the audience will love the seven couples that set out to get this job done.” 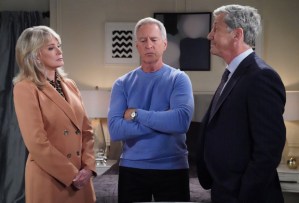 Shane (Days MVP Charles Shaughnessy, reprising his role) divulges the secret of the golden peacock and its highly sought after jewels to John and Marlena, who are on vacation in Switzerland. Shane dispatches them to an auction where the duo can covertly purchase the sapphire on behalf of the ISA. Unbeknownst to the trio, Anna ( Leann Hunley) and Tony (Thaao Penghlis) are also in town visiting Carrie (Christie Clark) and Austin (Austin Peck) and may or may not be interested in the sapphire as well.

“We’ve done free standing things in the past and they’re so popular with the audience, Hall notes. “We can’t really afford to go on location anymore because of COVID, [so] this is as close as we can get. I thought [head writer] Ron Carlivati brilliantly created seven different venues. And Tom Early, our set designer, had to create all these different cities.” 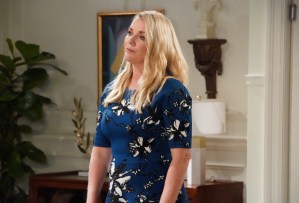 Days of Our Lives: Beyond Salem, which will roll out daily for free and culminate with the spinoff’s finale on Friday, also afforded Hall the chance to reconnect with former cast members.

“Christie [Clark] coming back as Carrie was huge for me because I’ve known Christie since she was a child,” Hall shares. “We were grabbing time to catch up and gab and the director would yell, ‘Shut up, everybody. They’re talking to each other.’ We were so happy to be back together.

“She’s got children now and lives in Europe and she was dying to hear from everybody on how they were doing,” Hall adds. “It’s always like coming home. “

“You always need to turn our show on and see familiar faces that you feel safe with and then you’ll stay with it,” Hall concludes. “Now those same familiar faces are on a not so familiar streaming platform; that’s the future. I remember I said, ‘What is streaming?’ I felt like the Dowager Countess on Downton Abbey.”

Are you excited about Days of Our Lives: Beyond Salem? Drop your thoughts in the comments.