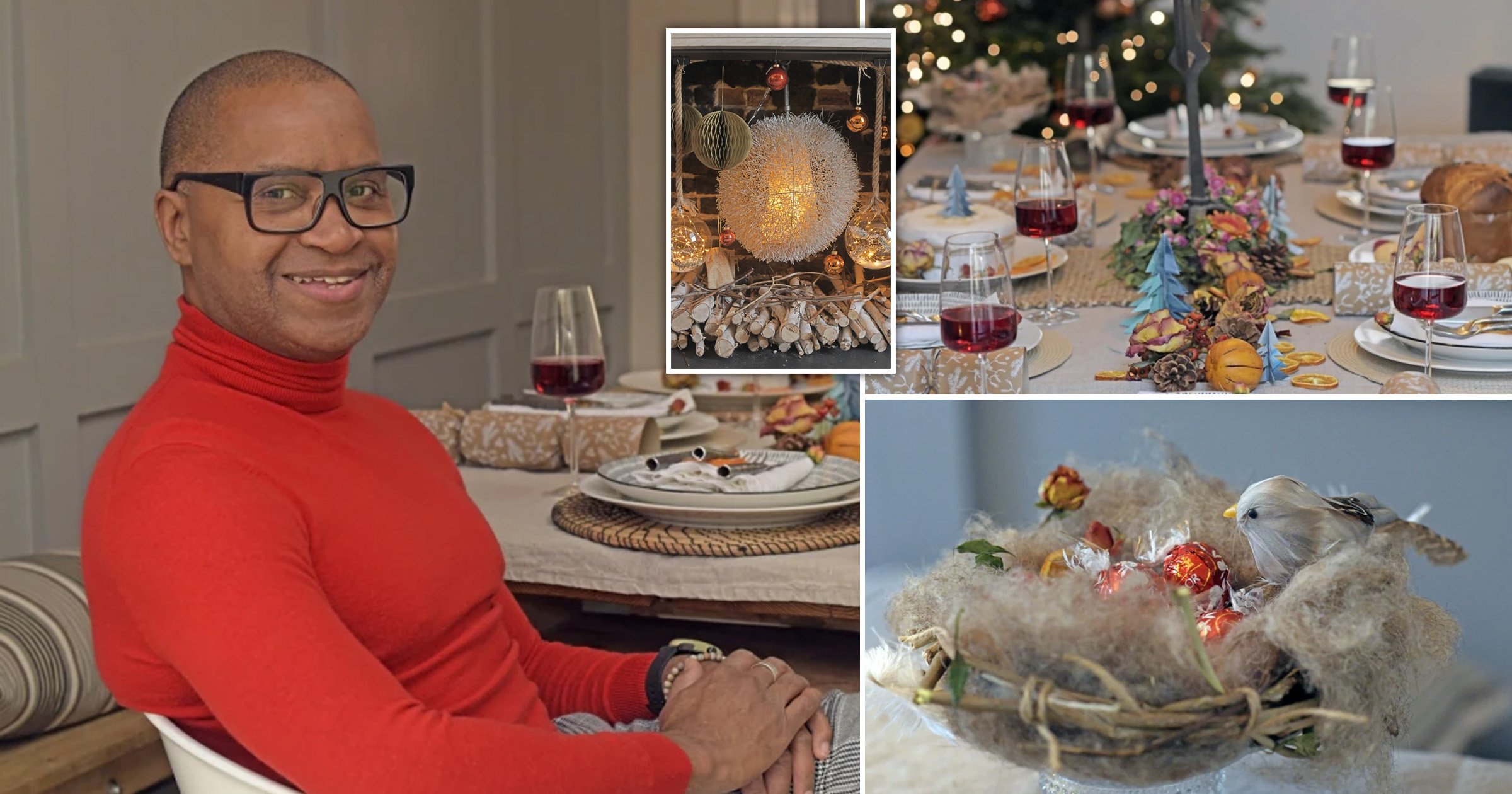 It’s all about the three Cs, when it comes to interior designer Simon Hamilton’s design ethos.

‘Contemporary, classic and comfortable,’ he says, standing in the kitchen of his London Fields house, looking out onto Hackney’s most effective little suntrap: grapes and olives are harvested from that tiny little patch of garden every year, so many they don’t know what to do with them.

‘I can’t see the point of something looking great if you don’t feel comfortable in it,’ he adds.

But to those three Cs, we should add a fourth, creativity – because it feels like there’s nothing Simon can’t transform into something beautiful for the home.

A branch his partner, James, a successful director of photography in film and TV, found on London Fields has now been hung in the entrance hall to give a bit of a Narnia feel to walking into the Victorian house; a table made from what look like oil drums to the simple quartz drinks coasters mounted in frames that now look like exhibits from the Natural History Museum. Oh, and chandeliers where the bulbs are covered in old-school sweetie bags instead of shades.

And Christmas, of course, is a time for creativity. ‘Especially this year after last year’s non-event,’ says Simon, who reckons he’s making up for lost time.

‘I prefer to go for a sustainable theme including eco-crackers from Robert Dyas.’ Simon’s latest venture is taking part in the BBC’s Virtually Home, an interior design show giving real people real inspiration to help them transform their spaces, ‘using virtual reality because a lot of people can’t visualise the different ideas you have for their house,’ he explains.

‘Most of our Christmas decorations will either be eaten or composted at the end of it,’ he goes on, pointing out slices of orange that were slow-baked until crispy then threaded with string to give a Victorian feel to the tree or the mini origami Christmas trees made from pages from magazines that a friend learnt how to make on YouTube.

But then this is a beautiful house to transform. ‘We have lived in the area for more than 30 years,’ says Simon, a native Londoner, who left and then came back, ‘but we moved into this house about seven years ago.

‘Back then, it looked a bit like a gallery: very black and white and quite cold and unfriendly but we wanted to bring the character of the house back so James put in the panelling here and upstairs in the main bedroom, and we got rid of the modern chrome fireplace.’

They also added underfloor heating, transformed the four-bedroom property into a three-bedder, to make the rooms more spacious, and knocked out a couple of walls to open up the whole ground floor so that as you walk in under the hung branches, you see the flow from sitting room through dining room and kitchen to garden, which, in the summer, becomes part of the house as the bi-fold doors disappear completely.

And it is an incredible area that has been gentrified at breakneck speed without losing any of the community feel.

There may be a Michelin-starred restaurant around the corner, Meghan Markle may have ordered her wedding cake from up the road and the area may be clogged up with cool pop stars and TV actors out jogging or converting old pubs into homes, but it is still somewhat surprisingly friendly.

‘It’s the friendliest road I’ve ever lived in,’ says Simon. ‘We have a Facebook page so we can borrow drills and find lost cats and we have summer street parties where we close down the road…’

For Meghan and Harry’s wedding, the local pop star dragged his piano out into the street to lead a proper old-fashioned sing-a-long, while at Christmas, they have a ‘lighting up’, where all the neighbours flick the switch on their seasonal decorations at the same time then take in the spectacle over a mulled wine in someone’s front garden.

‘And you don’t expect that of London,’ says Simon, whose ethos of ‘comfortable’ is in every aspect of this house, from the big sofa where Saturday night Strictly Come Dancing screenings take place, to the table that is a workstation and dinner table – sometimes simultaneously.

Then there is the garden, which, we are told, come summer, often turns into a spontaneous pop-up drinks party. Gaining his Interior Design degree in Nottingham, Simon has worked in design for 30 years – including in design recruitment and consultancy – and is now one of the most sought-after interior designers in the country.

He was international director for the British Institute of Interior Design, travelling the world, from Chicago to Japan, to talk about British design and is now a member of the Diversity and Inclusion Committee to provide guidance to interior design firms on recruiting people from different backgrounds, especially at apprentice level.

So, what advice would Simon give someone wondering what do to for their Christmas decorations this year?

‘Think about what theme you want,’ he says.

‘You should always have a theme, whether it’s winter wonderland with whites and silvers or a traditional greenery with red berries or this, which is based on some roses I was given that I dried out by hanging them upside down for a couple of weeks.

‘That was the starting point for the amber, orange, golden colours that I’ve gone for. Oh and, most important, don’t just go out and buy a lot of stuff to clutter up your loft for the rest of the year.’

‘The silver birch branches are from a tree we had in our front garden that died. The feather bird decorations are from John Lewis while the white hanging paper pine cones are from a collection at ARKET.’

‘The round paper decorations are from ARKET — and they’re handy in that they fold down — while the centre decoration is from @repurposeandmake. The amber and bronze baubles and the 20cm glass ball with white LEDs were all from John Lewis.’

‘More of the dearly departed silver birch with clear baubles that were a present from years ago. The artificial fruit, which looks really real, is from @repurposeandmake and are apparently from an old house in the South of France.’

Create your own bird nests

‘The feather birds are from John Lewis and the nest, which is made out of twigs and feathers, is from @repurposeandmake. And, yes, it’s filled with Lindt chocolates.’

‘A paper star from ARKET.’

‘The cutlery’s our old stuff from IKEA, the linen napkins are from Habitat and the dinner plates are from Maison du Monde. You can make the orange slices by slow cooking a real orange… for hours. And it makes the whole house smell lovely.’

‘The panettone is from TKMaxx and the dining plate from LSA International.’

‘The dried roses were a gift from The Rug Company, which is just up the road. And the little origami Christmas trees are homemade from pages from old magazines.’