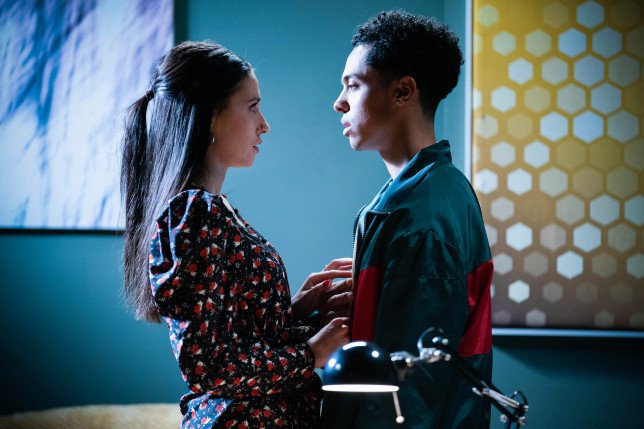 Fans have always rooted for Keegan Baker (Zack Morris) and Dotty Cotton (Milly Zero) in EastEnders to make it, after the odds were stacked against them all along.

But it could really be the end of the line when a frustrated and drunk Keegan confides in Dotty Cotton (Milly Zero) and one thing leads to another.

Speaking to Metro.co.uk, Zack shared: ‘There’s some exciting and juicy stuff and I can’t give away too much but in real terms, he does live with Dotty so him confiding in Dotty shouldn’t be much of a problem. But how he does that is going to cause some issues!

‘There’s always an underlying reason or vendetta behind something with Dotty. There’s an element of that and she isn’t in the best place either so when you combine the two, it could be a recipe for disaster.

‘Tiff’s not going to be happy! No wife’s gonna be happy about that. But will she ever know? If it does go further, will she find out? That’s another story…’

The relationship has been strained after Tiffany has become obsessed with surgery and changing her appearance due to body confidence and her desire to become a star.

And this is something that Keegan doesn’t understand, sighs Zack.

He explained: ‘I feel it’s a problem with a lot of younger women and men; body image is something that social media has really made become a problem, especially in young women.

‘She wants to obtain what her idea of a perfect body image is but in Keegan’s eyes, she is perfect as she is. He married her before all of this, he wants to spend his life with her so there’s an element of confusion over where it’s coming from.

‘But Tiffany doesn’t see that; she thinks he is only saying that because he has to but no, he means it; she’s beautiful. So yeah, there’s a lot of friction there.

‘I think he is most definitely worried – financially as well. When he found out, one of his first questions was how much? He doesn’t know much about fillers but he’s not naïve enough to think they are a tenner.

‘He has been working hard to build a stable future for them and when he feels he isn’t being matched, there’s an element of anger there; it’s very much like Keegan to lose his temper when he doesn’t understand something.’

So could this lead to Keegan perhaps resenting his wife after all they did to get down the altar and survive as a married couple?

‘I feel, yeah in a way,’ Zack mused. ‘It was a bold thing to get married; they wanted to prove everyone wrong, they can do this.

‘And now Tiffany seems to be proving naysayers right and it gets his back up. They had this pact and when it’s not matched, there is an element of resentment there.’