Doug (played by Duncan Preston) has been a pinnacle of the Emmerdale village since he arrived on the ITV soap back in 2007 as the father of Laurel Thomas (Charlotte Bellamy).

Since then, Doug has enjoyed romanced with the likes of Diane Sugden (Elizabeth Estensen), although he found himself in hot water last year when he cheated on his partner with Brenda Walker (Lesley Dunlop).

The reason Doug had slept with Brenda was because she had been a pillar of support to him in the aftermath of Gerry Roberts’ (Shaun Thomas) death.

Viewers will remember teenager Lachlan White (Thomas Atkinson) killed Gerry after the youngster discovered the villain had murdered his mother and grandfather, but Doug was blamed for the schoolboy’s death.

It’s going to be very fun

Doug had been trying to do the renovation work by himself and after Gerry’s body was found in the rubble after Lachlan caused the roof to collapse, the elderly villager was placed firmly in the frame.

The distraught character then found himself victim to a devastating, moneymaking scheme when an imposter pretending to be Gerry’s uncle arrived in the village before Lachlan’s murderous ways were revealed.

Although the village have been trying to move on after coming to terms with their losses at the hands of Lachlan, Gerry’s friend Liv Flaherty (Isobel Steele) has been hiding a secret about the late character.

Liv and Gerry had a shared love for video games, whilst Doug’s bond with the youngster came when the pair partook in some gardening together.

Knowing Doug was so close to Gerry, Liv finally opens up to the pensioner about some unlawful activity their deceased friend had been up to leading up to his grim demise.

Deciding to show Doug the evidence, Liv takes the villager to a plot Gerry had where he was planting cannabis plants, unbeknownst to his green fingered friend. 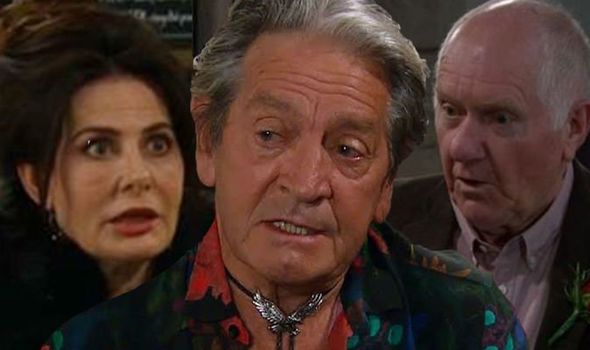 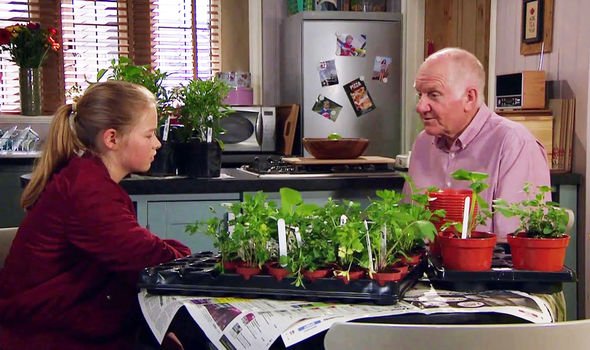 Doug will surely be left reeling at the news, but recently, the pensioner has been seen suffering from a back injury.

Upcoming episodes will see Bob Hope (Tony Audenshaw) and Bear Wolf (Joshua Richards) suggest Doug needs to take a back seat in leading the village football team due to his ongoing injury.

As the pensioner takes a dent to his ego, could he use Gerry’s cannabis plants to help him with the pain he is suffering?

Although Doug may try his hardest to keep his pain relief a secret, could another villager realise what the pensioner is up to and call the authorities?

Knowing there is no way to get out his predicament, Doug could admit his guilt and find himself behind bars, but viewers will have to wait and see what becomes of Gerry’s plants. 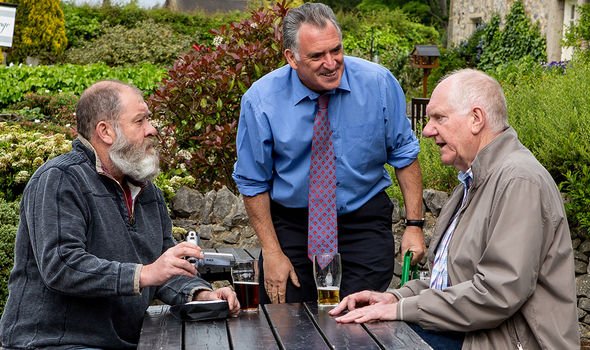 It’s going to be very fun

Elsewhere in the village, Mandy Dingle (Lisa Riley) is set to make her return to the Dales after a brief stint on the soap earlier this year.

Monday was last seen dropping a life-changing bombshell on ex-husband Paddy Kirk (Dominic Brunt) being the man who raised him wasn’t his father.

With his birth father Bear Wolf (Joshua Richards) setting himself up in the village, Mandy’s return to the fold is likely to ruffle a few feathers.

Speaking to press, executive producer Jane Hudson revealed: “It’s going to be very fun and colourful as she kind of makes herself at home in the Dingle household.”

What tricks does Mandy have up her sleeve this time around?