David (played by Matthew Wolfenden) has been left panic-stricken on Emmerdale, with the impact of the pandemic on his business taking its toll. With his son, Jacob Gallagher (Joe-Warren Plant), getting ready to go to university to study medicine, the shopkeeper has become worried he won’t be able to fund the youngster’s finances. Tuesday’s episodes of the ITV soap saw him more concerned than ever about money, which almost led him to cancel an engagement with Leyla Harding (Roxy Shahidi), but does she hold the power to help him out of his rut?

The episode began with Leyla calling in at the shop to gloat about the interview she had done with a wedding magazine which had made her become a bit of a local celebrity.

Wanting to celebrate, she told David and Jacob they were to join her and Liam Cavanagh (Johnny McPherson) at the Hide for some dinner.

Knowing this was going to cost, David tried to talk his way out of it but Leyla said: “When was the last time we had a family meal out?”

“When we could afford to throw money about,” he replied, with Jacob suggesting his mother and stepfather come around to their house to have dinner.

David was enthused by the idea, knowing it wouldn’t cost as much then but Leyla was adamant she was going to celebrate her good news in style. 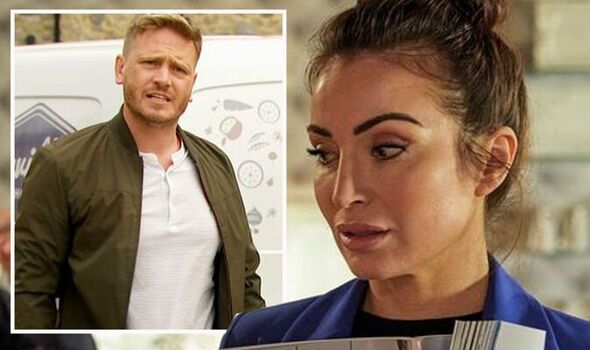 The shopkeeper reluctantly agreed to go but later in the episode, it was Leyla who was left worried when she came face to face with her drug dealer, Jason Denshaw (Parry Glasspool).

Having seen the spread in the wedding magazine, Jason wanted to entice his customer with some more drugs and offered her two bags of cocaine.

Leyla tried to remain strong, telling him she was taking a break from the partying lifestyle and she didn’t need his drugs.

However, by the end of the episode, she was high on cocaine as it seemed she had changed her mind about Jason’s offer.

Indulged in cocaine, Leyla offered to pay for everyone’s meal and David was thrilled to hear he wouldn’t have to pay out a small fortune.

When we could afford to throw money about

In the coming weeks, Leyla is going to find it harder to stay quiet about the cocaine and some of her loved ones could start to become suspicious about her behaviour.

Suzy Merton (Martelle Edinborough) and Jason are the only ones who know Leyla is on drugs and she wants it to stay that way.

It could be, though, that David spots his former lover talking with the drug dealer and assume she is cheating on her husband, Liam.

Confronting her about his suspicions, David could be shocked to learn she is actually buying cocaine from the man she was talking to.

At first, he would be horrified the mother of his son would be doing drugs but it could give him a money-making idea.

Having played by the books for too long, David could make contact with Jason and discuss a proposition with him to make some money.

Knowing Jason’s client base is quite big, David could explain he could be his eyes and ears in the village and deal cocaine to his contacts in the Dales.

It would only be a few people but the shopkeeper could state he could expand his books by selling the cocaine through the shop.

Although Jason would be sceptical, he would be willing to put David on a trial run to see how he does when it comes to dealing.

Watching from afar, Jason could be impressed by what he sees so could this be the start of a dark new chapter for David?

How well do you know your British soaps?

How many times has Ian Beale been married in EastEnders?

What is the name of Bianca Jackson and Ricky Butcher’s son on EastEnders?

On EastEnders in 2002, who accidentally ran Jamie Mitchell over in his car which caused his death?

How many times has Corrie’s Steve McDonald been married?

What happened to Emily Bishop in Coronation Street?

Who murdered Maxine Peacock in Coronation Street in 2003?

Which incident in 1993 killed off four characters in Emmerdale?

When did the show stop being known as Emmerdale Farm?

On what date did Hollyoaks air its first episode?

What was the name of the much-loved Coronation Street pet dog who was put down in April 2020 after 14 years?

1996 saw the arrival of one of Hollyoaks all time bad boys and rival of Kurt Benson, but who was he?

Who is the longest serving character on Coronation Street?

Who shot Phil in EastEnders?

How many fires have there been at Corrie’s Rovers Return?

Get out of my pub, you’re no soaps fan

As the money starts wracking in, David could surprise his father, Eric Pollard (Chris Chittell), by stating the business is going to survive.

The soap stalwart would be shocked, having looked at the books himself and he did not see any way it would be salvageable.

Will he uncover the real reason his son has managed to save the shop from sinking under and will Eric report David to the police for dealing drugs?

If he did, he could wash his hands of his son for good, never thinking David would resort to such measures for money.

With the rest of the village turning their backs on David, it could be the shopkeeper will have to spend his days in prison alone and with no support.

It turns out, that the actor who plays David, Matthew, never intended to play the shopkeeper and he was supposed to be a completely different character.

Speaking about his past, the soap star said: “I had about seven auditions for Eli [Dingle], and it was between me and Joseph [Gilgun].

“I sort of knew Joe would get the part because he looks like more of a Dingle than I do.

“But what I didn’t realise was that the producers were already considering me for David instead,” he said in an interview with Inside Soap.

Could David be more of a Dingle than he first thought with his money-making schemes?

Emmerdale airs weekdays at 7:30pm on ITV, with an hour-long episode airing on Thursdays.