Audiences see actor Daryl “Chill” Mitchell in his wheelchair on shows like “NCIS: New Orleans” or “Fear the Walking Dead” and assume he is playing a part. It’s easy to see why, as Mitchell, who has been acting in Hollywood since 1990, was paralyzed in a motorcycle accident in 2001 and his roles from before his accident are still in heavy rotation on television. But being an able-bodied performer set a precedent for Mitchell, and allowed him to be one of the few late-in-life disabled actors to transition into an equally successful career post-accident.

In the immediate aftermath of his accident there certainly was hesitation about whether Hollywood would keep Mitchell. He recounted how just four months after his accident he was back on national television on the series “Ed.” “I sat down to meet with the producers; they were nervous to even meet with me because they were like, ‘What are we gonna say to him?’” Mitchell told IndieWire. “I just started explaining some of the funny things that have happened to me since I was in a chair [and] it was like ‘Man, you got the job.’”

Mitchell understands his privilege when it comes to being a formerly able-bodied actor. There’s certainly a distance between people with disabilities like him and those who were born disabled. “A lot of times when I speak on behalf of the disabled community it’s like I’m feeling, ‘Man, you ain’t been disabled long enough to be the speaker,” he said, but that compelled him more to utilize his platform to advocate for disability rights in general — and his voice is necessary.

Considering the lack of disabled people, especially people of color with disabilities, Mitchell’s success is indicative of the need for more disabled stories. For Mitchell, to lose a role to a skilled actor just because of stairs isn’t just a loss for the performer, but for the production as a whole. “One time I asked them [the producers] to come downstairs. I didn’t get the job, but I set a precedent,” he said.

“I still do things to make things accessible for myself and that’s because being Black in the business I’ve already faced adversity. There were a lot of things I had to dance around to make things work with me,” he said. Mitchell has his own Winnebago, complete with ramp, to allow him a place to relax. He also travels with his two sons, who can help with any physical handling. But, more importantly, Mitchell crafts a set that is understanding of disability. 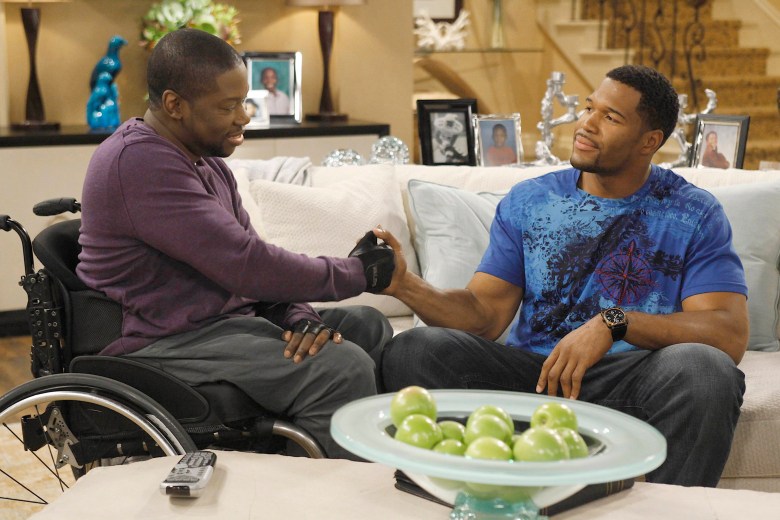 On the “NCIS: New Orleans” set Mitchell explains that every crew member understands how to work with him and have absolutely no qualms with aiding in everything from transferring to creating accessible chairs and other tools to help with his performance. “Why can’t they [the industry] make this for everyone else?” he said. Mitchell explains that accessibility that he utilizes ends up benefiting the rest of the production, like with those on set that use push cameras, carts, and other wheeled items. In the end, though, what Mitchell is asking for with regards to his disability shouldn’t be controversial in the grand scheme of things. “[Hollywood] pays all this money to get certain actors out of jail or put them in rehab but if I’m asking for a simple ramp you won’t give me a problem,” he said.

Mitchell explained that much of the conversations we’re now having with regards to disability aren’t very different from the discussions about Black inclusion in Hollywood. Disability “is something that’s unusual that they don’t normally have to deal with,” he said. “The conversation you and I are having is still the same about race in America.” Mitchell said it’s up to showrunners and others in power to work alongside disabled performers, to talk to each other and say that working with a disabled performer is no different than any other actor.

“It’s your job and campaign and make somebody else feel easy. Or at least plant that seed in their mind,” he said. “If Steven Spielberg worked with me and he tells some other big producer they’re gonna be like, ‘Well, Steven worked with him and I’m gonna give him a shot. What’s the worst that can happen?’”

Mitchell said that it’s definitely the beginning of a new era with regards to actors with disabilities. In the case of “NCIS: New Orleans,” the show works with a large pool of disabled performers — but there’s still a ways to go. Mitchell understands that, for many people, him being in one of the two most prominent franchise series on television means audiences might be exposed to a disabled performer for the first time. “I’m honored to be the first one that they see. What I don’t like is being the only one that they continue to see,” he said.