Hawaii is where we head to with top chef and entrepreneur Gordon Ramsay. This Sunday’s episode opens with a wild storm raging as he navigates the treacherous Hana Highway.

In our clip below, we meet a super confident Hawaiian food expert, Kimi Werner. The Hawaiian world-class free driver teaches Gordon how to spearfish without fear.

She tells him he can do it, despite Gordon’s apprehension masked in his patented humor. He quips: “Spearfishing in Hawaii? I’m like a fish out of water.”

In this clip, Werner teaches Gordon the tricks of the trade when it comes to freediving in shark-infested waters.

Gordon takes to the task like a fish to water. He spears a delicious fish, and Kimi says seaweed seasons its flesh. The two tuck perfectly sliced fresh fish onboard their boat.

Marveling a bit that the fish seasons itself, Gordon muses that it would be amazing if the fish could also cook itself. He really enjoys the sashimi made on the fly by Kimi on the boat, and marvels it doesn’t get much fresher than that!

Where is Gordon Ramsay exactly this week? 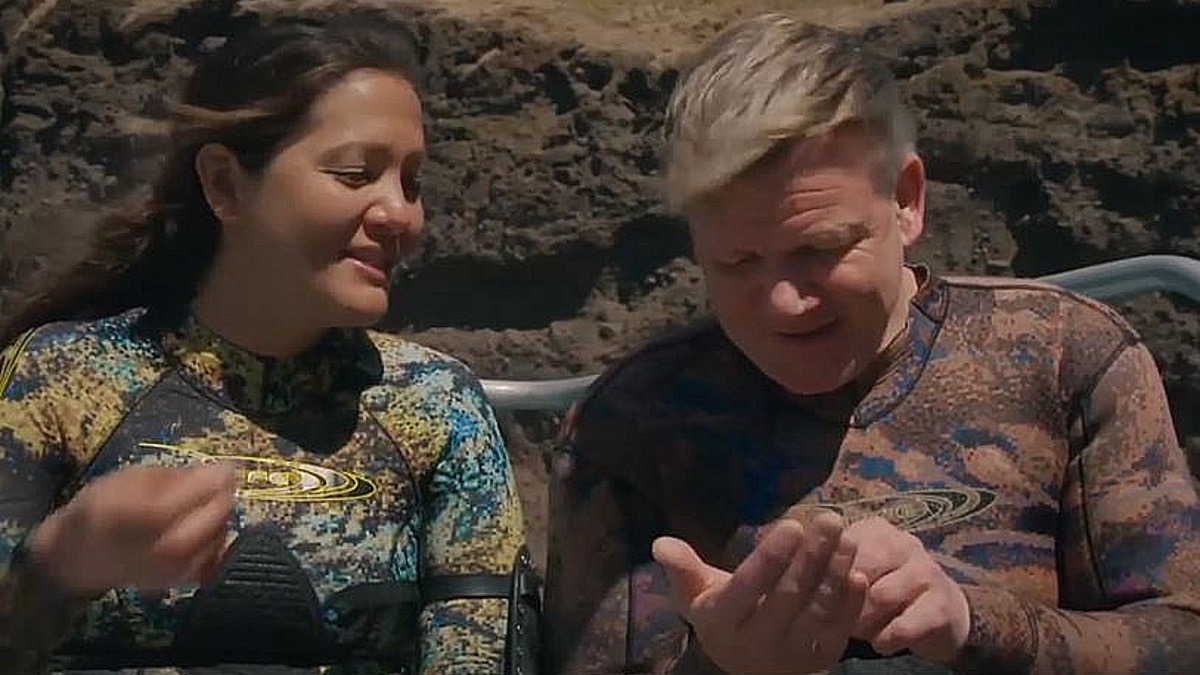 The Hana Coast of Maui is where he is at, as indigenous ingredients and locals whose heritage spans the globe are in store for the intrepid British chef.

The trade winds blew in cultures from every continent, who gifted the Pacific island chain with non-native fruits and animals that have since flourished and become part of the local cuisine.

Classic Hawaiian dishes shaped initially by Polynesians are shown, as foraging unique sea life is in store. Gordon will also suit up and go underwater to find spiky sea urchins and shellfish-like spiny lobster from the lava rock shoreline.

The task this episode? Gordon will prepare a big feast for the families of this spot on Maui.

He will add a pinch of his Scottish heritage to the mish-mosh of dishes inspired by cultures like the Filipinos and Portuguese that Hawaiians love.

The climate is not unlike summertime in Britain as Gordon notes the heavy rainfalls.

He also heads to a taro farm and peels taro root for poi, the national dish of Hawaii which he compares to peeling taters with his grandmother. The poi is beaten and stirred into a paste that Gordon initially does not care for. He says: “I’m stuck between a rock and a hard place … Do I do a dessert or something savory?”

In his segment, he also meets Uncle Russell and sees how Portuguese-inspired Huli Huli Chicken is made on the grill. Gordon says this rudimentary grill turns out better rotisserie chicken than fancy grills costing thousands.

Tune in to see how he does for the final feast in this scenic paradise.

Who are the local experts in Hawaii that assist Gordon?

There are only two left after the Hawaii episode:

Ramsay travels to Laos, where he takes on a rapid stretch of white water, kayaking down the Mekong in search of culinary inspiration. Learning from the locals, he treks through dense jungle to sample eggs of the aggressive weaver ant, dives for freshwater snails and hunts for giant water bugs. Using his newly acquired skills, he cooks a banquet for monks at the local temple.

Ramsay journeys to the rugged Alaskan Panhandle to learn survival skills and discover Alaskan cuisine. On his adventure, he learns how to cook seal with a native Tlingit elder, climbs a sheer rock face in a snowstorm and goes grouse hunting before putting his newfound knowledge to the test at a feast with legendary local chef Lionel Uddipa.