“I think the whole thing is a tragedy and Lydia holds herself deeply responsible,” Hulu star tells TheWrap of that Ofmatthew twist 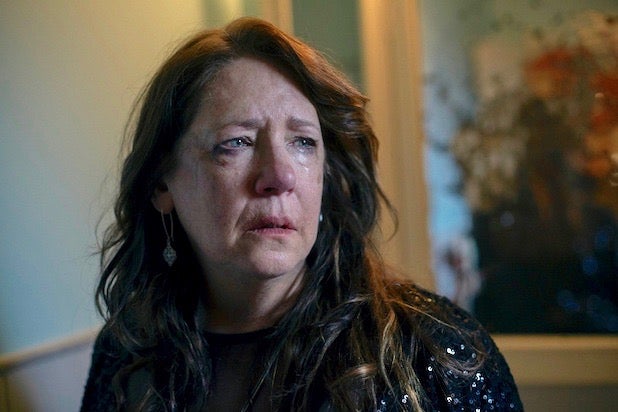 Aunt Lydia’s backstory was finally revealed on this week’s episode of “The Handmaid’s Tale,” with a story that may actually have you sympathizing for the devil responsible for many of the horrors inflicted upon the Handmaids of Gilead.

Wednesday’s hour of the Hulu drama gave us a glimpse into the former life of Ann Dowd’s Lydia, who once upon a time was an elementary school teacher with deeply Christian values and a deep concern for her young students. Lydia takes an interest in one little boy, Ryan (Ian Ho), in particular and his mother, Noelle, who isn’t doing a fantastic job of parenting him. When Noelle (played by Emily Althaus) and Lydia grow close due to Lydia’s desire to help her improve, the young mother encourages Lydia — a divorcee — to get back on the dating scene.

This prompts Lydia to go out with the school’s principal, an act she regrets when he rebuffs her sexual advances after their date, saying he’s just not ready after losing his wife. She takes her anger out on Noelle, telling authorities she thinks the young mother is an unfit parent, prompting them to remove the boy from Noelle’s care.

“I just thought it was a phenomenal choice on the part of the writers, the choice of having it be a heartbreak for her,” Dowd told TheWrap. “The choice of sharing that level of shame and humiliation — not where it began, because that had to have happened in childhood, I think — I just love the way into her backstory.”

“It showed us the power of shame and how it can derail a life,” she continued. “And how, because it’s unconscious, it can rule the day. And without Lydia even realizing, ‘Honey, you don’t have to listen to this, nothing bad happened. You did not do anything wrong,’ the fact that they chose that way in, I thought that was a fantastic choice. I loved teaching of young children, that she had a friendship with Noelle, the kind of friendship she’s never had before. I thought it was just beautiful.”

The Lydia that viewers know from the present-day timeline in Gilead rules her “girls” with an iron fist and values their babies and the children of this dystopian society above all else. Dowd says we begin to see Lydia’s philosophy for dealing with the Handmaids take shape in “Unfit,” due to her relationship with Noelle and how tragically that played out.

“She had a failed marriage in her past, and I think when that personal part of your life fails, you put all of your love and energy and hope and self worth into your job, and her job is teaching. And I think she truly loves that little boy and she also felt she could help Noelle,” Dowd said. “This is a young mother who just doesn’t realize, and I think I can make a difference in their lives. She clearly loves her boy. If I could just gently show her, ‘Listen, you can’t serve him chips for lunch, you know. And you don’t need to go out with married men, there’s a better way, honey. It’s about self-respect.’ And that’s a genuine thing. And what happens, in addition, is a friendship of sorts that Lydia doesn’t see coming.”

“And suddenly a woman taking interest in her in terms of, ‘Hey get back out there, you’ll meet someone. You’ve got a lot of love left to give,’ and putting on the makeup, and the closeness — Lydia doesn’t have friends like that,” Dowd continued. “So it’s because of Noelle’s encouragement that she decides to go meet the principal in this environment she never would have. So when this failure happens, when Lydia makes the move sexually, that is too much for him, and he just says, ‘Let’s just go a little more slowly,’ to her, it is full-out shame. So she doesn’t consciously see that, in fact, she’s blaming Noelle, and wanting to punish Noelle.”

“I think what happens is so many doors shut — again unconsciously — and Lydia says, ‘I don’t know how I got off track listening to Noelle. I’ve given the woman many chances,’” she added. “‘There is no reason in the world why she should be going out with a married man. I’ve given her many chances. I think I’ve indulged her. I was treating her as a child when she’s, in fact, not a child and she’s got to be more responsible.’ I think all those things happened in Lydia’s mind. Enough is enough. The boy will do better with another family. And it makes that new idea in her mind.”

The episode splits its time between Lydia’s past and present, where she’s dealing with the unruly June/Ofjoseph (Elisabeth Moss), who turns the other Handmaids and Lydia on Ofmatthew (Ashleigh LaThrop) by revealing she doesn’t want her unborn baby. The hour ends with Ofmatthew being killed by the Guardians after pointing a gun at Lydia in the market. Both the choice of OfMatthew to try and shoot her and the guards to kill the Handmaid leave Lydia in shock.

“I think it’s fair to say that Lydia prides herself on knowing where a Handmaid is emotionally — when a Handmaid is upset, when she needs a little more one-on-one time,” Dowd said. “I know that Ofmatthew has been stressed because Ofjoseph has been treating her poorly. And because she’s the ringleader, the others follow suit. And that annoys and really bothers Lydia. But I don’t think she read it, obviously did not read it, clearly that Ofmatthew was in fact on the ledge, just like she did not read Emily (Alexis Bledel) before she stabbed her. And I think she holds herself responsible for not really reading the situation correctly. It’s very, very disturbing. And the fact that the Guardians would be so reckless as to shoot her. I mean, they could have wounded her foot or something, but no. I think the whole thing is a tragedy and Lydia holds herself deeply responsible.”

As for where the rest of the season is headed, Dowd says the “complicated relationship” with June and distrust of her current commander, Joseph Lawrence (Bradley Whitford), will play a big a part in Lydia’s storyline.

“First of all, there is love there, there is a closeness there,” she said. “They’ve gone through a huge amount together and I think it meant something very significant when Offred asked her to be the godmother [to her daughter Nicole]. So there is a connection there.”

“But she’s also a very difficult Handmaid; I can’t read her,” Dowd continued. “She does comply on the outside, but I don’t know what’s going on in that mind of hers. She’s hugely resistant to real change. She has a strong endurance level that I just don’t quite know what’s going on. And I don’t like Lawrence, not one bit. He is not following the rules, not for a minute. And this is a very bad influence on someone who needs close supervision like Ofjoseph. So, it’s a very troubling thing. How do I manage her? How do I help her? I think that’s going to be ongoing, for sure.”