Social media has declared Hannah Ferrier queen of the Below Deck Mediterranean Season 5 reunion after drinking out of a mug that said, “I Need A Valium.”

The Wellington crew virtually gathered for a chat to discuss the dramatic and crazy season. Andy Cohen hosted the reunion, which focused significantly on Captain Sandy Yawn’s apparent dislike of Hannah.

Part one of the two-part event was pretty much what viewers expected. Malia White and Captain Sandy blaming everyone else, especially Hannah and chef Kiko Lorran, for their bad behavior. Kiko’s smiling face and the positive vibe was one saving grace for the reunion.

There were also a couple of surprises that have fans talking today.

Andy did mention fired Below Deck Med deckhand Peter Hunziker and his racist post. The host also mentioned second stew Lara Flumiani, who declined to attend the reunion, and her short stint on the show.

What has Twitter buzzing, though, is Hannah and her mug that sums up her entire fight with Captain Sandy.

Hannah is famous for many things, but now it is the mug sip perfectly throwing shade at those who wronged her.

After a draining spat with Captain Sandy and Malia over the cabin assignment drama, Hannah casually took a drink from an I Need A Valium mug.

The moment came right after Captain Sandy declared the decision of cabin arrangements was up to Malia. It was also right before the subject of Hannah’s firing for having unauthorized Valium and CBD pen on The Wellington.

Andy picked the right time to bring up Malia turning in Hannah and Captain Sandy firing her, just as the show ended. There was even a cliffhanger that leads fans to believe either Hannah was lying about the CBD pen or Andy is going after Hannah unnecessarily for ratings.

Twitter wasted no time showing love for Hannah and her mug. Hannah is the queen in fans’ eyes.

The former chief stew may be done with the Bravo show and yachting, but fans will forever think she is GOAT of Below Deck Mediterranean. 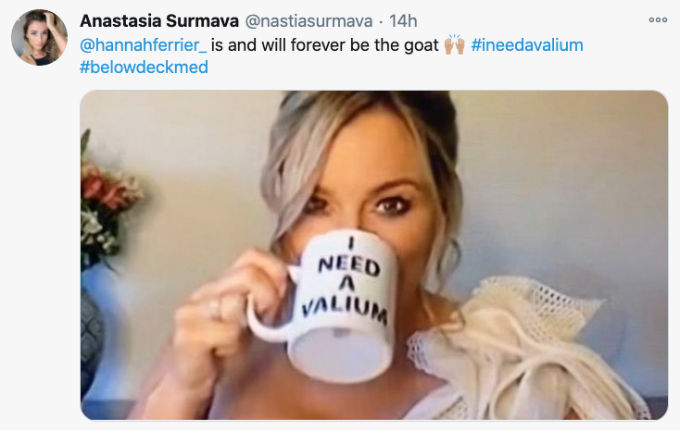 Even Watch What Happens Live tweeted Hannah is a total 2020 mood with her mug.

There is no question Hannah Ferrier is the winner of the Below Deck Mediterranean Season 5 reunion with her infamous mug. It is worth noting Kiko has also come away from this even more beloved than ever too.

Fans have nothing but love for Hannah and can’t wait to see what the chief stew does next week.