With the upcoming release of another “Scream” movie and nostalgic IP becoming the de facto lay of the land, there are two schools of thought when it comes to reviving a franchise: Keep the original intent and make fun, or go completely out of left field and do something different. In the case of Amazon Prime Video’s “I Know What You Did Last Summer,” the new serialized version retains little save for the name of the 1997 feature (itself based on Lois Duncan’s novel of the same name) and the generalized plot point that a death takes place. In lieu of a return to urban legend frights, audiences get the streaming equivalent of “Euphoria,” where our murder-mystery comes with a healthy, vaguely pornographic, dose of teenage sex and drugs.

Allison and her twin sister Lennon (both played by Madison Iseman) couldn’t be more different. Allison is quiet (defined here as weird) and grieving her mother’s suicide. Lennon, on the other hand, is sexually provocative and unfeeling. On the night of graduation, an accident happens that leaves Lennon and her friends to take the secret to their graves. But, of course, someone doesn’t want them to forget and vengeance starts being served.

It’s hard to decide where to begin with this series, in part because we already got a high-concept YA adaptation earlier this year with the far superior “Panic,” which the streamer already canceled. Like that series, “I Know What You Did Last Summer” exists in a world where kids are doing horrible things to the utter obliviousness of their parents. But while “Panic” had its teens dabbling in death-defying acts and a little casual sex, “I Know What You Did Last Summer” is practically the Electric Daisy Carnival. The first episode sets the tone for numerous callbacks to a neon-and-glitter graduation party where the teens are openly doing cocaine and engaging in three-ways while their parents just mingle in another room.

You should have a pretty good clue of what the show’s immediate twist is the minute you see identical twins. Unfortunately neither young woman feels like an individual, more like the outdated “Good Twin/Evil Twin” writ large. There’s a reason one is labeled as going “full Villanelle” after all. Hell, even their names are a dead giveaway to their entire identities. Lennon, as her rock-star inspiration connotes, is the living embodiment of every 18-year-old girl a grown man hopes to find on Instagram. She’s a chronically smiley, master manipulator who has as much remorse for sleeping with her sister’s true love as she does for filming her sexcapades for the internet. As she says, “My mom’s dead and I like to fuck,” and god bless Madison Iseman for trying to give that stupid line any semblance of meaning.

The sheer amount of sex in this series is heavy-handed, especially as the camera lingers on female bodies. This is contrasted with the full-frontal male nudity that’s specifically there for comic effect. I mean, if the series’ nostalgia trap includes going back to 1990s conventions of gender dynamics I guess they succeeded? Iseman works hard as both Lennon and Allison, though it’s not much of a stretch. Even though the series wants us to believe Allison is Carrie White-level weird, she looks exactly like Lennon with nothing to differentiate her outside of wearing her dead mom’s necklace. 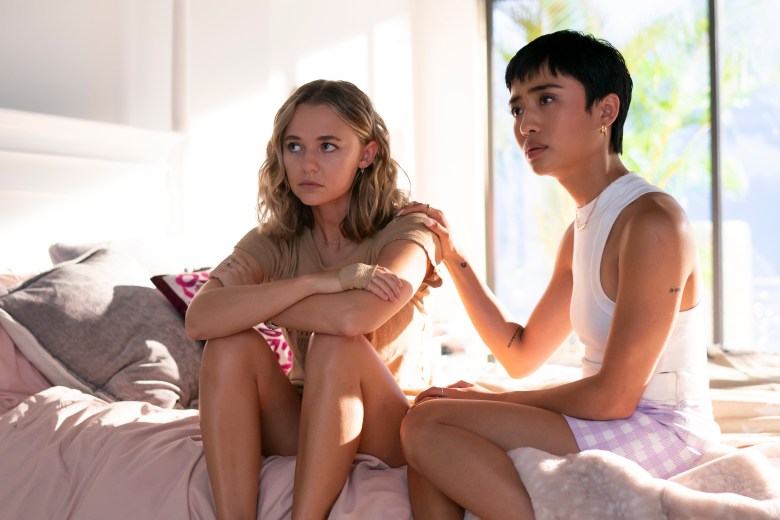 “I Know What You Did Last Summer”

Then again, the rest of these characters don’t feel like real teens but what movies and television believe teens are like when they really aren’t. Drugs and sex aside, every one of these characters feels like a 40-year-old adult trapped in an 18-year-old’s body. The script is littered with lines that no one would say, let alone teenagers. (“My stunning queer king” takes the cake.) Brianne Tju is stuck with most of these lines as Margot, Lennon’s Insta famous bestie who is also her casual sex partner. Most of the other actors can also be summed up in one sentence, from Ezekiel Goodman’s Dylan, the quiet boy with the weird mom who loves Allison, to Sebastian Amoruso’s Johnny, the football player who says it’s totally OK to date his high school football coach because he was 18 at the time.

Interestingly, the series is set on a Hawaiian island which sounds like a decision made because of Covid protocols. In execution, though, it becomes laughable that our protagonist is the one white, blonde female living on the island, and no native Hawaiians are mentioned or included in the main cast. Using Hawaii also seems like it’s meant to emphasize isolation, but the characters act like this is “Twin Peaks,” from the crass, vulgar housekeeper who throws rats through her employers windows, to a local sheriff who talks in a formalized, clipped accent for reasons.

With all this going on, what about the actual murdering? That’s really an afterthought, at least within the first four episodes. There are countless red herrings thrown out to sustain what little tension exists, with big blocky notes being left behind and a cadre of text messages to make you think a specific character is involved. One of the main crew is killed early in the series, but with all the stuff being thrown at the camera with regard to sex and peculiar character traits, you might forget that they were murdered at all. (I thought the character had just fallen which, honestly, would have killed them anyway.)

“I Know What You Did Last Summer” could win the title for being the year’s most unpleasant show. Zero fun, next-to-no compelling arcs, and a cast filled with derivative caricatures of who adults think “the kids” are these day results in a hollow series serving up teen bodies as fodder for violence. Couple that with a heavy emphasis on teen girl sex and all the congregated ickiness — the pointless I.P. mining, already-axed alternative series, ridiculous dialogue, obvious plotting, etc etc forever — will send you sprinting to the shower before the credits roll.

“I Know What You Did Last Summer” premieres its first four episodes Friday, October 15. New episodes will be released weekly.