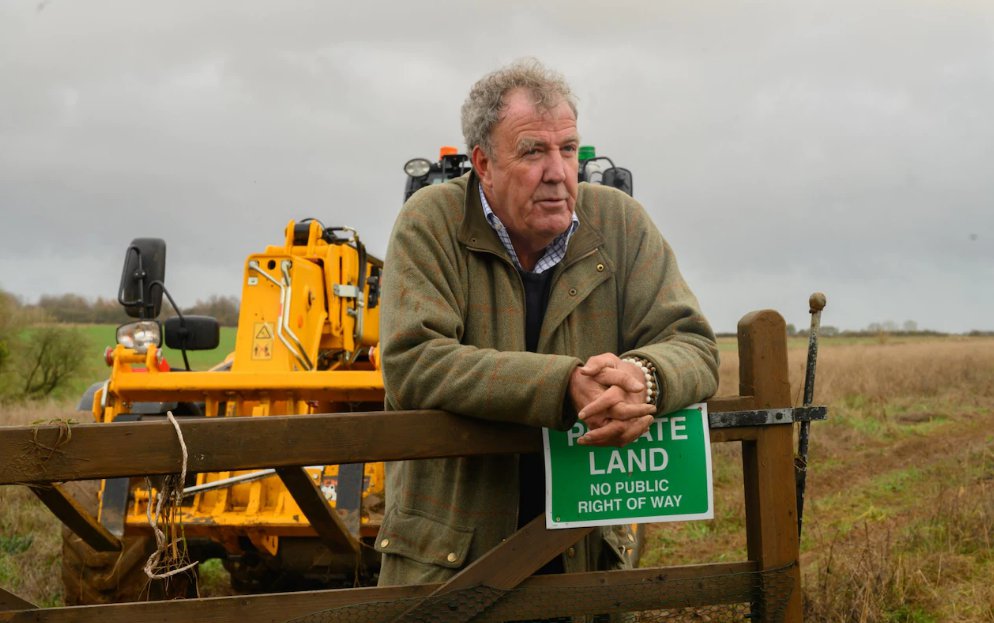 Jeremy Clarkson’s Range Rover was sprayed with three tones of mushroom compost by angry protestors in what appears to be a stunt for Saturday Night Takeaway.

A group of actors pretending to be furious locals were seen staging a fake campaign at the presenter’s Diddly Squat farm shop in Chadlington, Oxfordshire on Wednesday.

In footage obtained by Mail Online, the cluster of people brandished placards and banners and was heard cheering as a digger dumped soil over Jeremy’s vehicle.

Jeremy, meanwhile, was spotted watching the scenes from a distance with fake police officers stood close by.

‘It was like something out of a Monty Python movie, I couldn’t believe what I was seeing,’ an eyewitness told the publication.

‘First there was a naked man being chased by a policeman and then this digger appears out of nowhere and dumps all this stuff all over the car. What really shocked me was that Clarkson didn’t say a word, which is not like him at all.’

They added: ‘Normally he has an opinion on everything, but he just stood there silent as all this stuff landed on his car.’

Sources close to Metro.co.uk have told us that the new series of Saturday Night Takeaway is set to air in 2022.

The scenes come after Jeremy’s proposed plan to convert his lambing shed into a restaurant was revealed earlier this month.

The 61-year-old called a meeting with local people at the Memorial Hall in Chadlington after there was ‘gossip’ in the village over the Diddly Squat farm shop’s future.

In the hour-long meeting, Jeremy said the new restaurant would be ‘cheaper’ than neighbouring establishments, meaning people would pay around £60 for a meal for two.

He also apparently told locals he was hoping to curb the number of people who visit the shop daily – it has seen shoppers travel from across the country and queue for hours to purchase goods such as candles, fresh milk and cheese.

Jeremy bought the farm in 2008 and it was run by a villager, but when he retired in 2019, the TV presenter decided to see if he could run it himself.

The former Top Gear host’s trials and tribulations is the subject of his hit Amazon series Clarkson’s Farm.