The idea for “Kajillionaire” came to Miranda July when she was trapped in bed, half-awake, between a sick husband (filmmaker Mike Mills) and her sick son. “Three people were walking toward me, two women with long hair,” she said on the phone from her Echo Park studio. “I go get my phone and reach over and start dictating. Luckily I didn’t fall back asleep. I was voice demoing into my phone for about three days. I’d put the the phone down and pick it up again and walk away out of the room from people and say more. It was a magical thing. I’d follow these three people anywhere. ‘What will they do next?’ You know?”

Five years later, the film debuted at Sundance to raves, was delayed by the pandemic from June to September 25, and now breaks on 500 screens around the country (except for New York and Los Angeles). “We felt it was accessible enough to get out nationwide,” said Focus distribution chief Lisa Bunnell.

“Kajillionaire” didn’t have to be a film. July juggles many creative outlets, rarely losing her balance as she fashions smartphone apps, shorts, art, books, and stories; every few years, she directs a feature film. No matter which project has her focus, there’s always more in reserve. “It’s so fun to play hooky on something else,” she said. “The whole time I was writing ‘Kajillionaire’ it was a back-burner thing, so it’s already in the door by the time it has any pressure on it. That is nice.”

While she loved her last movie, bittersweet romance fantasy “The Future” (2011, Roadside Attractions), in which she and Hamish Linklater starred as a couple whose lives are disrupted by a cat, pushing that film over the finish line “was a little brutal,” she said. “It was made during a recession, not the easiest time to make that movie.” The film was well reviewed, but barely scraped past $1 million worldwide.

When womenswear label Miu Miu asked her to make a short for their women’s film series, she proposed that they pay for her idea for a smartphone messaging app, and she’d make a short about it. They went for it. On that film, “Somebody,” she met her “Kajillionaire” cinematographer, Sebastian Winterø. “Doing that short got me itching to make another feature,” she said. “I just had the perfect team around me for that project, I loved working with Sebastian, and I hadn’t gotten to work with Jennifer Johnson, the costume designer. Everything came together, so I was feeling kind of healed. Each movie is totally different. I had some battle scars that just disappeared after that short.” 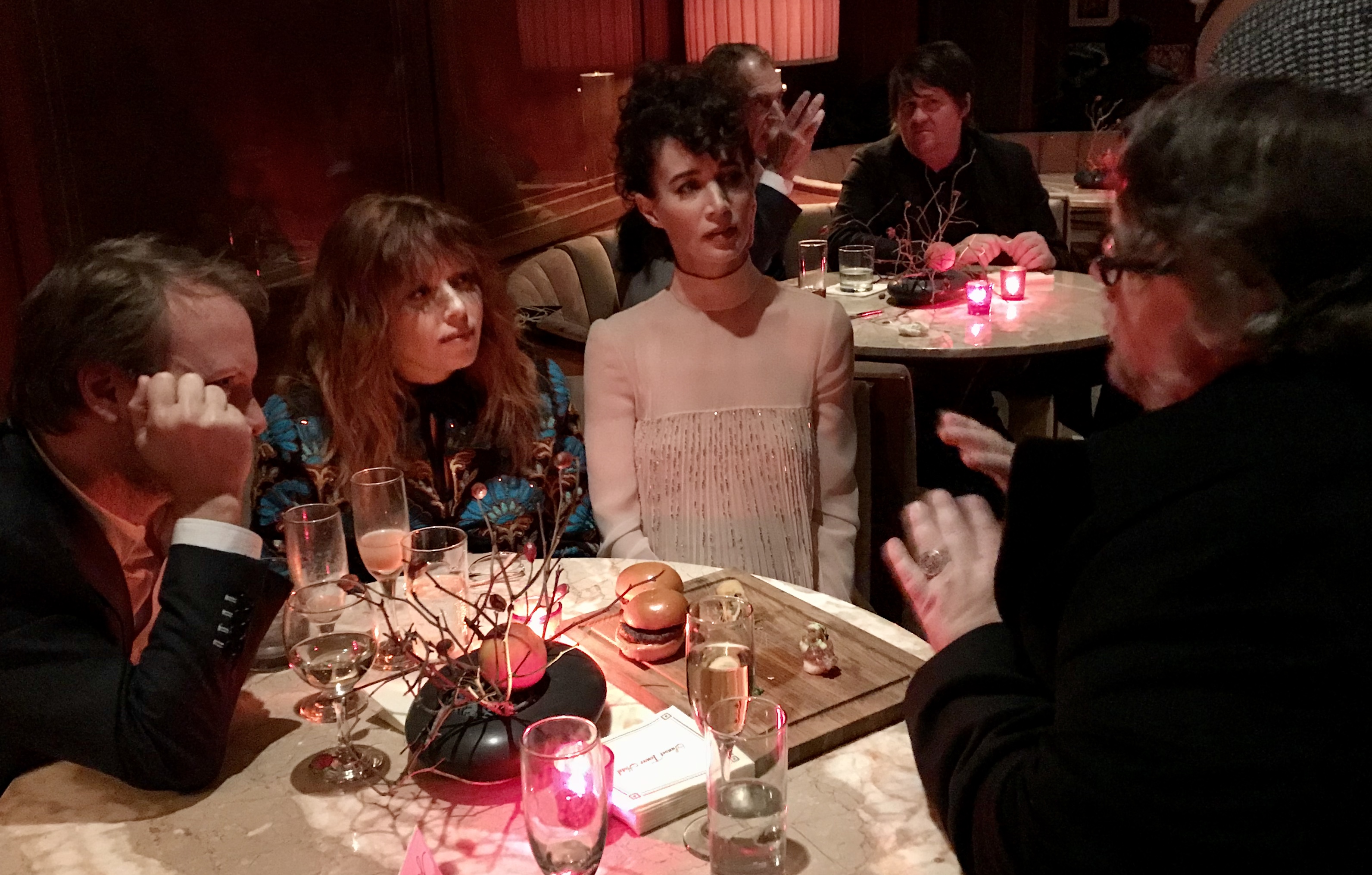 Making “Kajillionaire,” she said, was like butter. “You might think a follow-up to that would be hard,” she said. “I don’t know what happened. This is the first movie I didn’t have to look for financing.”

It took two years to write the “Kajillionaire” story as a screenplay. In 2017, July sent it to Plan B producer Dede Gardner (“12 Years a Slave”), who had emailed July about loving her novel, “The First Bad Man.” Said July, “I thought, ‘It wouldn’t be insane to send her this script. Yeah, let’s do it!’ It saves a lot of energy when you don’t spend it looking for money.” Financed by Plan B and Annapurna, “Kajillionaire” was in production by 2018, and sold to Focus during Sundance 2019.

“I am that kid who wanted to be a director when I was a teenager,” she said. “Once you’ve done it, it’s kind of like going to the moon. You want to go back. I’m never gonna stop making features. I’m slow. I want to write books. They take as much time as a movie and more. Sometimes this is my pace for good reason. But yeah, I’d say, on day one of being on the set: ‘Wow, I can’t believe I get to do this!’”

“Kajillionaire” might have been an easy sell, but this smart mix of genres is unlike anything that has come before. A dark dramedy inspired by “Mission Impossible” capers (and a coming-of-age story besides), it stars Evan Rachel Wood as Old Dolio, the neglected adult daughter of two struggling con artists (Richard Jenkins and Debra Winger). She slowly starts to figure out that her dysfunctional family dynamic isn’t the norm: They’re dirt-poor, and execute various cons to make the rent on a sunken apartment that is deluged with suds from a factory every day. She also falls in love for the first time with Melanie (Gina Rodriguez), a disruptor who joins this den of thieves. And when The Big One hits, Old Dolio is sure it’s The End.

“Earthquakes are a great way to physicalize the anxiety of that family,” said July. “Emotionally, that’s how it should feel when you go through this transformation: You survive The Big One, it is our childhood. You are amazed to find yourself alive, and there’s the world. The part I most wanted to do right and not fuck up was that feeling of being reborn when she comes out of that dark bathroom into the world. I absolutely had to get that right to my satisfaction for it to be the movie I wanted to make.” 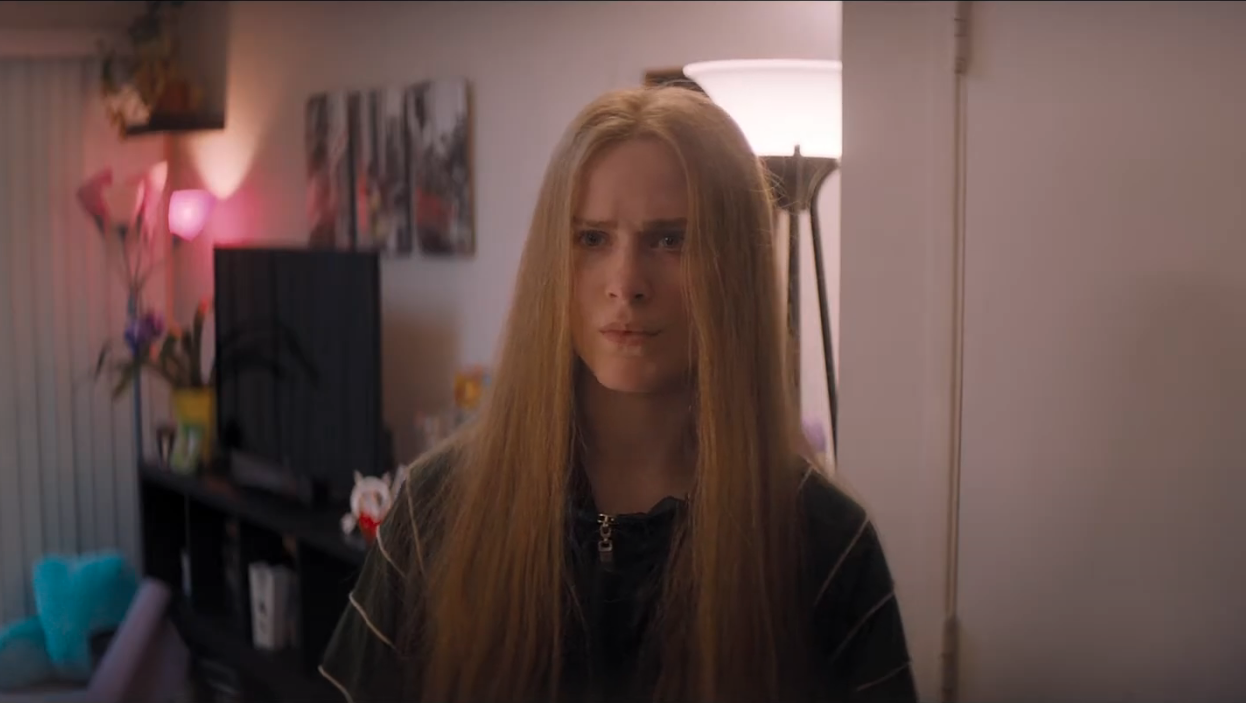 July gives Old Dolio several moments where she discovers that she’s separate from her parents, and starts to look at them in new ways. “It’s the part of seeing your parents as strangers,” said July.  “The beginning for all of us of growing up. When before, everything you thought was the world was just them.”

Melanie teaches Old Dolio to smile and laugh and dance and love. While the parents “are not really there with other people in relationships, the opposite,” said July, “the most happiness comes from dumb things, like these bodies, dancing. Actually we are really here, we are not probably going to die. We don’t have to live assuming that.”

July met a ton of actresses who wanted to play the grave and awkward Old Dolio — and then she met Wood. “I didn’t know her,” said July. “She’s such a shapeshifter. I need some signal from her, that you get at this heart level: ‘Of course you can play her!’ I don’t want this to be a stretch. The part reminded her of her favorite in all film history, the one she relates to the most, ‘Edward Scissorhands.’ Okay, right. This definition of being vulnerable, everything they touch gets hurt, is so spot-on. ‘Oh, we’re going to have a real simple, easy vocabulary, not a lot of extra talking to explain this.’”

July worked with Wood in her studios as though they were in therapy sessions, digging into the character and her responses to things, reminding her that if Old Dolio didn’t understand something, she just had to be uncomfortable. “You direct each one so differently,” she said. “It was physical and psychic. I’d give her a note, barely saying anything, but doing something with my body. ‘Use the language you have.’ [Old Dolio]’s a full soul inside. She doesn’t have articulacy about these things. To get to her brain, you have to go down to another level: no language, noises, grunts, knock a book onto the floor. It got us to a place where Old Dolio was easy and had range within this narrow, not-normal range.” 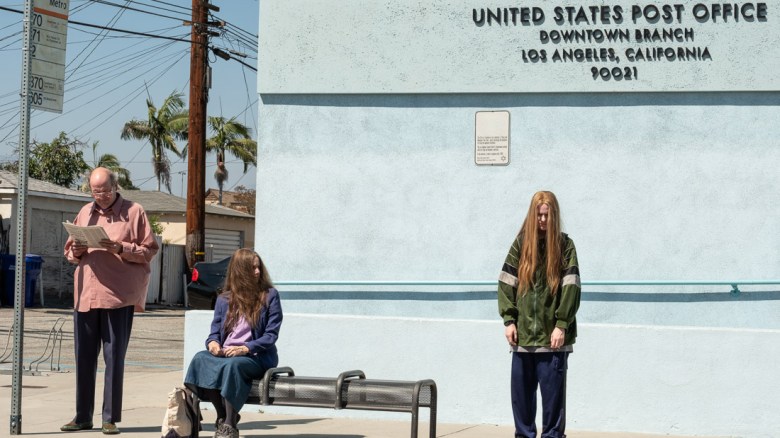 With Winger, July felt blessed. “I felt like I lucked out and got to cheat with a character you don’t get to know a ton about,” she said. “You put Debra Winger in that part, she’s got built-in depth for miles. She does this very intense process. She’s beyond dedicated.”

Two weeks early, Winger also came to Los Angeles and worked with July on the limp, the long gray hair, the costumes. “There’s darkness there. As beguiling as we’ve seen her be, you know that’s not a woman to mess with. She walks into uncomfortable situations knowingly.”

Carrying the film’s comic relief was ace character actor and Oscar nominee Jenkins (“The Shape of Water”), who had less trouble than some of his peers with collaborating with a group of women, July said, “and was able to be a team player, help to make that family work. Obviously he can play this part and be so funny. But also he’s heartbreaking enough, you want to believe him when he’s trying to break your heart.”

The movie’s ace in the hole is “Jane the Virgin” star Gina Rodriguez, who is a revelation as the movie’s sexpot. July had her in mind from the beginning. “Usually you want the All-American relatable person,” she said. “I looked around and that person looks like Gina today. That is the All-American avatar right now. I got way more bang for my buck. Yeah, I loved having this beautiful, sensual, sexy woman, all mauves and beige colors, wanting Old Dolio, that’s who she wants.”

Probably the most challenging thing July had to deal with: bad hair. The image she had started with is difficult to pull off in a movie: two women with back-length straight hair. “I knew this has to be good,” said July. “We’ve all seen the bad wigs. They’re very expensive. We really went all out. To be totally honest, the first few days, I was not happy. ‘It has to be better.’”

Focus is putting on a full court press for the theatrical opening, from using July’s celebrity pals to get out the word on social media to reach July’s passionate fan base, and trailers in front of “Tenet,” to a three-day retrospective including her classic “Me You and Everyone We Know” and Q&As at MoMA, BAM, and the American Cinematheque. If you miss it in theaters, keep an eye out for PVOD.