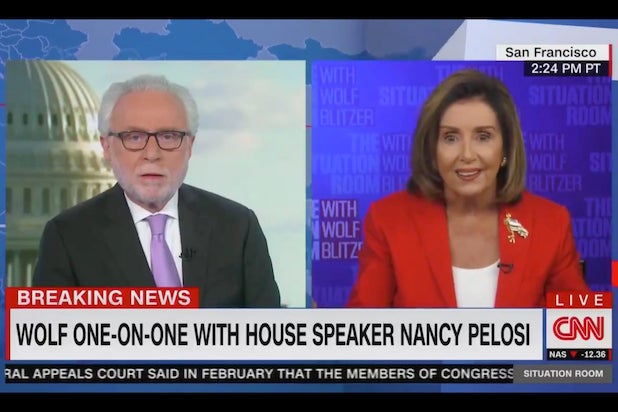 A Tuesday interview between Nancy Pelosi and Wolf Blitzer about the ongoing negotiations for a COVID-19 relief bill quickly grew heated as the House speaker accused the CNN anchor of being a Republican “apologist” who was uninformed about the bill.

“With all due respect, and you know we’ve known each other a long time, you really don’t know what you’re talking about,” Pelosi said. “I don’t know why you’re always an apologist, and many of your colleagues, apologists for the Republican position.”

During the interview, Blitzer pressed her on why House Democrats have rejected the Trump administration’s latest $1.8 trillion stimulus bill offer as many Americans have continued to struggle financially during the pandemic. “Can you look them in the eye, Madame Speaker, and explain why you don’t want to accept the president’s latest stimulus offer?” Blitzer asked earlier in the interview.

“I hope you’ll ask the same question of the Republicans of why they don’t really want to meet the needs of the American people,” Pelosi said. “I know what their needs are. I listen to them and their needs are not addressed in the president’s proposal. So when you say to me why don’t you accept theirs, why don’t they accept ours?”

Blitzer then interjected to quote a tweet from Rep. Ro Khanna and later referenced former presidential candidate Andrew Yang as examples of Democrats who want the $1.8 trillion deal to go through.

“Honest to God, you really — I can’t get over it because Andrew Yang, he’s lovely. Ro Khanna, he’s lovely. They are not negotiating this situation. They have no idea of the particulars. They have no idea of what the language is here,” she said. “You quote two people who know nothing about the agreement — there is no agreement, but what the suggestions are, as if they’re some authority on the subject. Please. Give equal weight to all of the chairmen on the committee who have written this bill.”

Watch the interview below: