What makes Psych 3: This Is Gus different from any other Psych movie?

“Where do I begin? How to start?” adds Simon. “We’ve got a pregnancy. We’ve got somebody getting married, but she’s still married to somebody else. We’ve got Chief Vick doing one of the best scenes I’ve ever seen. You’ve got Ladies’ Night…. Come on, it’s a whole bag of tricks!”

In Psych 3: This Is Gus (premiering this Thursday on the Peacock streaming service), “Groomzilla” Gus (played by Dulé Hill) and BFF Shawn (James Roday Rodriguez, who also co-wrote the movie) — in  preparation for a shotgun wedding before the birth of Baby Guster — go rogue in an attempt to track down mom-to-be Selene’s estranged husband.

Juliet, however, is not keen on husband Shawn poking into the perhaps-mysterious past of her newest, and rare, friend.

“That’s the thing — the Chief and Juliet have their dynamic, but she’s always been my boss,” notes Maggie Lawson, who plays Juliet. “And Lassiter is my friend, but in a very different way.” So when it comes to gal pal Selene, “I will, like, protect her at all costs, even if there seems to be some shady stuff going down,” says Lawson. “I’m like, ‘No, we’re not even going to look there. You’re not ruining this for me!’” 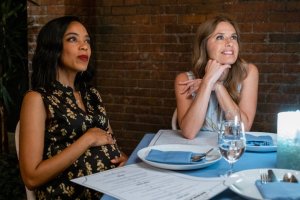 But as the boys embark on their usual, investigative hijinks, Juliet, Selene and then Chief Vick (played Kirsten Nelson) eventually engage in their own snooping, uniting the women of Psych like seldom before while also allowing greater insight into Gus’ bride-to-be.

“James and [Psych creator] Steve [Franks] wrote a fantastic script, and they gave Selene a lot of juicy material,” Simon raves. “And for the first time I got to work with Kirsten and Maggie at the same time, and there was something magical about that, especially because Selene is fully pregnant in this movie. Selene is still a crazy nutcase, but she got to be a crazy nutcase with these two ladies. I really loved doing it, and I am certain that the fans are going to love seeing it.”

As the ladies’ investigation builds toward a thrilling and hilarious collision with the boys’ own snooping, time is made to stop and take a peek into Chief Vick’s interior life, and we come to realize that her valiant work ethic does not come without a cost. [Cue what Simon referred to above as “one of the best scenes.”]

“I was so excited when I read this script to see her vulnerable side, to see her soft side,” says Nelson, who plays Karen Vick. “We’ve always seen Chief as like the ‘mom’ of this crazy group, and she can be very stoic, solid and unwavering. So the fact that I got the chance to show [her asking] ‘Why am I doing this, to what end? What’s important to me?’… I was so, so amazingly grateful to Steve and James for allowing us to explore that side of her.”

Lawson says that one of Psych 3‘s top two highlights for her was “that I got to be with the ladies a lot of the movie,” and as such was on hand for the campsite scene teased by her longtime castmate.

“To see Kirsten having this really, really intense scene…. Like, we were all in tears while she was shooting that,” Lawson shares. “We’ve called [that sequence] Ladies’ Night because it was a night shoot and it was, I think, the only day, maybe, in the history of Psych that James and Dulé had off. It was just the ladies all day, and it was so much fun.”