Sarah Paulson knew she had her work cut out for her in trying to portray Linda Tripp in a compassionate light on “Impeachment: American Crime Story,” but she was not prepared for the actual response her version of the key figure from the Clinton-Lewinsky scandal got from its earliest audience.

“It was very clear from that very first TCA, or whatever we did, people didn’t like her,” said the actress, referencing the presentation the show gave in August 2021 during the Television Critics Association Press Tour. “They didn’t like her and they didn’t think that we liked her, and it seemed to be that they thought we were making a point of doing what most people expected would be the story of Linda.”

Now speaking at the show’s FYC event at the El Capitan Theatre in Los Angeles last Friday, she added “I personally found it almost unrecoverable from that experience because I was so devastated that they’d think that about someone I had spent a very long time sort of living inside, and I didn’t have those feelings about her.”

Paulson, on stage with executive producer Nina Jacobson, showrunner Sarah Burgess, producer Monica Lewinsky, and co-stars Annaleigh Ashford, Margo Martindale, Judith Light, Mira Sorvino, and Beanie Feldstein (via Zoom), explained that hearing those early reactions made her feel like “nobody wanted to challenge their experience or expectation of what she was, and what they thought her to be. And they didn’t want to be invited inside the experience because she was a person who betrayed someone and all that is true. There are real truths about things that Linda did that are just undeniable. And it’s hard, I think, to rewrite what we’ve already written and subscribed to in our minds, so it shouldn’t surprise you, but I found it to be utterly devastating. Devastating.”

Even more challenging was receiving the feedback while she was still shooting the FX limited series. “It was like ‘Good morning TCA—’ ‘We hate it. We hate her.’ It was like, ‘Oh, good,’ waiting for my 6 a.m. call and like four hours in the makeup chair.”

Paulson emphasized that the intention behind “Impeachment” was never to re-center the story around Linda Tripp in any way, a motivation she mentioned was floated around her Emmy turn at Marcia Clark in “The People vs. O.J. Simpson: American Crime Story.” “That wasn’t the goal there either I don’t think. Maybe it was in some places. I certainly never thought about it in that way. But it was certainly not the goal here,” said the actress. 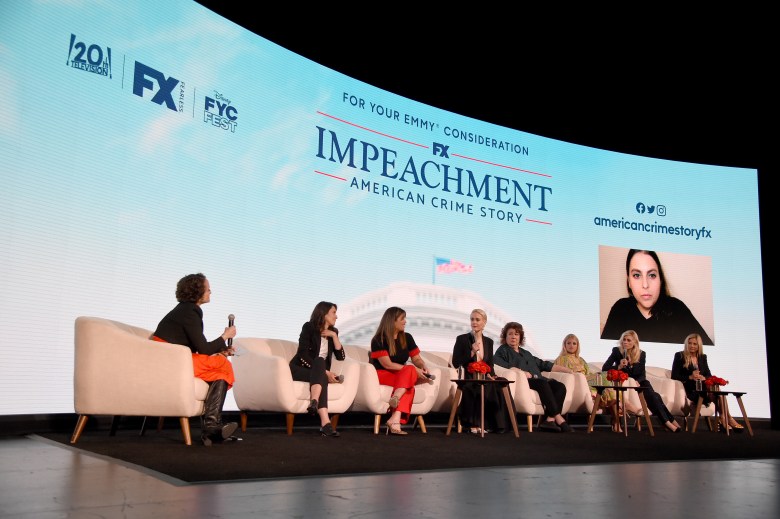 Despite the initial unwanted perceptions of where her arc as the infamous Tripp was going, Paulson stated that in the end, the newest season of the award-winning anthology series “is still the greatest experience I’ve ever had from an acting standpoint period, the end, and chiefly because of what Sarah Burgess wrote. And because of the experience I got to have with Beanie,” (who played Monica Lewinsky).

Also noting that they shot this third iteration of “American Crime Story” during the pandemic, before there were COVID vaccines, the Outstanding Lead Actress in a Limited Series Emmy contender called the project “a really Herculean thing,” and said “it felt like what we were doing, and who we were doing it with, [had] more than the best of intentions with the goal to crack something open. . . and I think some of it the world was just like ‘I don’t know if we want to have that view of that terrible woman,’ and that’s fine. It’s just not the view I hold.”