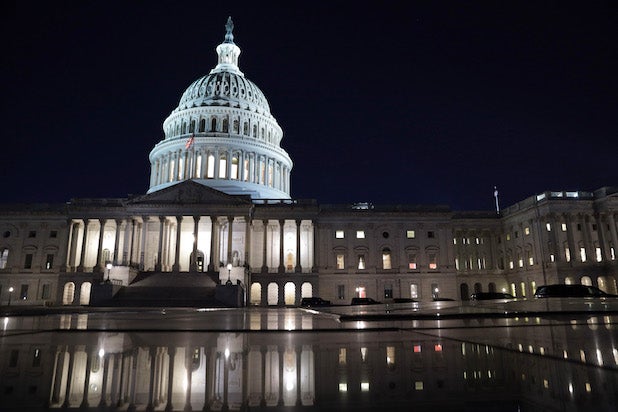 WASHINGTON, DC – MARCH 05: The U.S. Capitol is seen in the evening hours on March 5, 2021 in Washington, DC. The Senate continues to debate the latest COVID-19 relief bill. (Photo by Alex Wong/Getty Images)

The relief package, which includes $1,400 direct payments for millions of Americans and billions put toward distribution of the COVID-19 vaccines, was initially OK’d by the House of Representatives on Feb. 27. Now that the bill, known as the American Rescue Plan, has been passed by the Senate, it will return to the House for final congressional approval before it can be sent to Biden to sign into law.

“We tell the American people, help is on the way,” Senate Majority Leader Chuck Schumer said Saturday, according to the Associated Press, adding: “Our job right now is to help our country get from this stormy present to that hopeful future.”

The Senate’s debate preceding the bill’s approval lasted more than 24 hours, ending with all Republican senators voting against the package and all of the Democrats voting for it, with Sen. Dan Sullivan, a Republican from Alaska, not present.

Senate Minority Leader Mitch McConnell said after the bill was approved that “the Senate has never spent $2 trillion in a more haphazard way or through a less rigorous process,” according to USA Today.