And yes, Discovery is still looking for the Megalodon 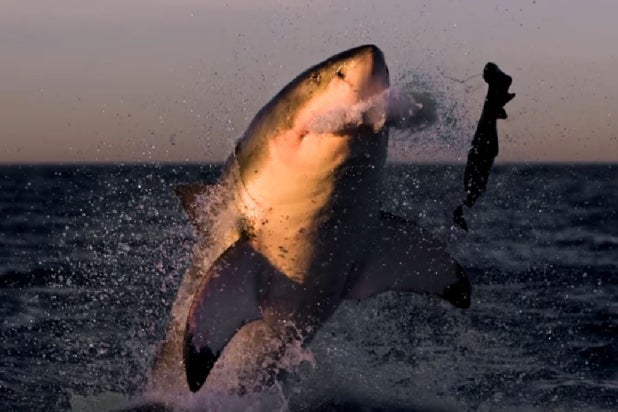 It’s that time of the summer again — “Shark Week” is about to rear its toothy head. Discovery Channel released the official schedule for 20 hours of shark-tastic programming from July 28 to Aug. 4.

For the first time ever, Discovery Channel is rolling out a scripted, feature-length film just for “Shark Week” — starring Josh Duhamel, “Capsized: Blood In The Water” tells the true story about an October 1982 shark encounter.

Below, find Discovery’s full descriptions for all 18 programs, plus the official schedule.

“Five times bigger than a T. Rex, with jaws capable of crushing a tank, the Megalodon was the ultimate apex predator. This 60-ton mega-shark ruled the world’s oceans for nearly 20 million years. Then, suddenly, it vanished. So how did the king of the deep lose his throne? Paleontologists are using fossilized teeth – the only surviving evidence of the Megalodon – to take a bite out of the mystery of its disappearance. These prehistoric dental records may hold the key to when this monster shark went extinct and why. Meanwhile, marine biologists are studying the Megalodon’s modern shark descendants to understand what caused its demise. What they’ve uncovered is a deep sea “Game of Thrones” that pitted one species against another in a battle for dominance. Josh is diving into shark-infested waters to unravel one of the oceans greatest mysteries – what happened to the mighty Meg? Produced by Ping Pong Productions.”

“From Will Packer, record-breaking Producer of “Girls Trip” comes the ultimate “Shark Trip.” Rob Riggle is back and campaigning for his own ‘Shark Week’ special – but he’ll only get one if he can find a way to bring along some of his celebrity friends and get them to swim with sharks. The trip is booked, the bags are packed, and the adventure is ready to begin – whether or not his friends realize what they’ve signed up for. Produced by Will Packer, Will Packer Media, Anomaly Entertainment, and Haunted Steel Mill in association with Hazmat Productions.”

“White sharks are infiltrating the waters off Cape Cod. This year alone a record 150 white sharks were recorded off the coast, and for the first time in 80 years, a white shark attack turned fatal. Greg Skomal teams up with Andy Casagrande and shark expert Kina Scollay in New Zealand to test the most exciting, cutting-edge new technology for shark detecting surveillance. If all goes well, they hope to bring it back to Cape Cod to make the water safe again. Produced by Anomaly Entertainment.”

“Shark experts Brandon McMillan and Jimi Partington head back to Guadalupe Island to search the depths for Deep Blue. Believed to be the largest great white shark in the world, Deep Blue, measures almost 21 feet long and over 2 and a half tons. If they can locate her, they might be able to shed some light on the mysteries of these deep-sea mega sharks. Produced by Anomaly Entertainment.”

“In the middle of the South Pacific lies a tiny speck of land called Norfolk Island. At the end of the 18th century, it was the site of one of the harshest penal colonies on Earth. But today, it is the gathering spot of some of the largest tiger sharks on earth… and an extraordinary event – full size animal carcasses tossed into the sea by the present-day islanders. Has this practice completely altered the behavior of these massive sharks and made shark attacks on humans more likely when this beef buffet is outlawed? Shark scientist Riley Elliott is on a quest to find out. Produced by Icon Films.”

“Ramping up the adrenaline levels for ‘SHARKWRECKED: CRASH LANDING,’ Paul de Gelder & James Glancy bail out of an aircraft at 3500ft to experience first-hand what it’s like to crash land into some of the world’s most remote and shark infested waters. This time the location is Palau in the Pacific, renowned for its rich shark life and many plane wrecks. Produced by Big Wave Productions.”

“You asked for more, you got it! Back by popular demand, hosts Paul de Gelder, Mike Dornellas, Nick LeBeouf, and Jamin Martinelli will put themselves in harm’s way as they reenact 5 recent shark attacks to find out how things could have ended differently. What do you do if you’re surrounded by human or fish blood? Could the electronics we’re bringing into the water be triggering attacks? Our hosts will attempt to answer these questions and more as they stage the most daring shark experiments ever attempted in search of answers. No cages are allowed. Produced by Lucky 8.”

“Air Jaws returns as shark expert Chris Fallows leads a team of researchers into a newly discovered shark vs. seal battleground at the base of a 200-foot cliff. Here a deadly game of life and death plays out in waist deep water. As the great whites stalk the seal colony, the seals have learned to team up and mount counter attacks against the predators. And for the first time, these extraordinary predatory events are captured in their entirety by the researchers. Produced by Shark Entertainment.”

“Wildlife biologist and animal tracker Forrest Galante embarks on a mission to the Indian Ocean to search for the supposedly extinct Pondicherry shark. This rare species was last seen in the 1970s, but recent photos of unidentified sharks around Sri Lanka and the Maldives lead many to believe it could still be alive. Along with his wife Jessica, a team of wildlife experts and filmmakers, Forrest dives into an untamed wilderness to track down this amazing shark. But because of its ability to osmoregulate, meaning it can swim in fresh or saltwater, Forrest must cover tons of ground – including deep ocean, shallow coral reefs, underwater caves, and even jungle rivers. Armed with cutting edge technology including a 3D structure scanner and genetic testing, Forrest’s team leaves no stone unturned in their quest to validate whether or not the photos of a strange shark swimming in the Indian Ocean are Pondicherry. If they can prove it’s still alive, it will be removed off the extinct species list, and they can redouble their efforts to study and protect the Pondicherry’s ongoing existence. Produced by Hot Snakes Media.”

“Based on the harrowing true story of an October 1982 shark encounter. After a yacht bound for Florida capsizes during an unexpected storm, its crew is left to drift for days in the chilling waters of the Atlantic where they become prey to a group of tiger sharks. With the hope of rescue dwindling, the crew must do everything in their power to survive as the sharks continue to hunt them. Starring Josh Duhamel, Tyler Blackburn, Rebekah Graf, Beau Garrett, and Josh Close. Produced by Stephen David Entertainment.”

“With the help of shark scientist Dr. Craig O’Connell, and the confirmed cooperation of Réunion’s newly established CRA Shark Protection Program, RETURN TO SHARK ISLAND investigates the ongoing shark crisis that is threatening to bring this former island paradise to its knees and sets out to answer the critical questions: Have the islanders’ worst fears come true? Is this so-called ‘spike’ in shark attacks now the new normal? Why have Bull sharks, rarely seen before 2011 on the populous west coast of the island, now apparently made it their home and hunting ground? Why despite all the measures taken by the authorities are people still dying and crucially, what, if anything, can be done about it? Produced by Beyond Productions.”

“150 miles off the coast of Baja, California, Guadalupe Island is a notorious hot spot for great white sharks. Here to target the abundant seal population, great whites are silent hunters, stalking their prey and killing with a surprise attack. But the waters surrounding Guadalupe Island are crystal clear. So how do they do it? At other white shark hot spots around the world there is always a kill zone – a place where more predation events occur. But here in Guadalupe, an attack has never been witnessed. Now, a team of experts led by Dr. Yannis Papastamatiou and Melissa Marquez, are setting out to record never before seen white shark hunting behaviors. With the help of cutting-edge technology and three kinds of specialist cameras, they aim to discover the location of the Guadalupe Kill Zone. Produced by Arrow Media.”

“One of ‘Shark Week’s’ most exciting missions over the years has been the search for Granders, the largest Makos in the world. Joe Romeiro and Keith Poe revisit the most exciting events and discoveries from Monster Mako and Return of the Monster Mako all leading up to brand new footage captured off the coast of California of rare Mako behavior. Produced by Discovery Creative and Production.”

“An intrepid team of shark explorers ventures out for a third year to the famed Isle of Jaws, a remote island off the West Australian coast. Two great white shark males, believed to be brothers, are at the heart of an intriguing mystery –do these animals recognize, and prefer to live and hunt with, a blood relative? The team endures a runaway submersible, face-to-jaws encounters, and deploys a mini-ROV camera dubbed “The Guppy” that provides some of the most chilling close-up visuals yet. By using the latest in tracking technology, a major mystery is finally solved. Produced by Red Rock Films.”

“Master illusionist, author and inventor Andrew Mayne is going to attempt to create the first-of-its-kind SHARK SUIT to overcome the senses of a great white shark and make him invisible to the world’s most perfect predator… He teams up with underwater cameraman Andy Casagrande and Dr. Neil Hammerschlag on a global quest to uncover the power of the great white’s predation senses – all to prepare him for the ultimate test – putting himself in the middle of a great white frenzy in Australia. Will it work? Andrew’s life depends on it. Produced by Anomaly Entertainment.”

“In the Pacific Ocean, danger lurks just below the surface. Along the sundrenched coast of Southern California, single mother Leeanne Ericson is enjoying a relaxing day at the beach when she’s confronted with her worst nightmare – a giant great white shark that grabs her leg and drags her under the water. Off the rugged northern coast of Hawaii, spearfisherman Braxton Rocha is ambushed by a tiger shark so massive it could easily swallow him whole. In the wake of these vicious attacks, both victims must fight through their injuries and the unforgiving elements to reach safety before it’s too late. Produced by Hit + Run Creative.”

“Discover everything that has happened in the world of sharks this year – the unbelievable viral videos, the biggest news stories, and the latest cutting-edge shark science. Produced by Main Event Media.”

“Rooster Teeth tackles ‘Shark Week’ as the Immersion crew answers a wide range of shark-fueled questions by taking some of the most iconic shark moments from pop culture history and bringing them to real life. Produced by Rooster Teeth, Alevy Productions and Critical Content.”