Move over Charlize Theron’s bowl cut, because Sonic the Hedgehog officially got biggest makeover of the whole year. Yeah, we’re letting a cartoon hedgehog take up that mantle. 2019 has been weird for all of us, just run with it.

In case you missed the Sonic ~drama~ when it first surfaced in April, Sonic the Hedgehog is getting a solo movie courtesy of Paramount Pictures, but fans low-key hated the initial trailer and called it “nightmare fuel.” Hedgehog enthusiasts fully spiraled after seeing Sonic in the initial teaser, with most zeroing in on his extra creepy human-like teeth.

But they didn’t need to fear, because the movie makers were awesome about taking the critique in stride, and they completely redid Sonic’s design.

Here’s a before and after side-by-side photo, for your enjoyment: 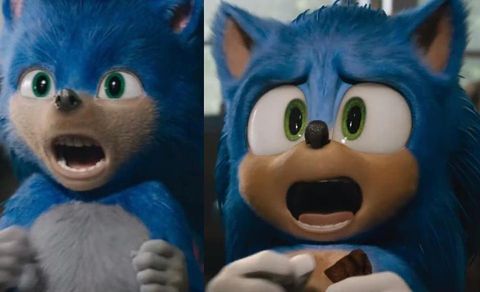 After the initial outcry, filmmaker and visual effects artist Jeff Fowler released a statement and the Sonic movie’s release date was changed. (It was originally supposed to come out on November 8 this year. The new date is February 14, 2020.)

Thank you for the support. And the criticism. The message is loud and clear… you aren’t happy with the design & you want changes. It’s going to happen. Everyone at Paramount & Sega are fully committed to making this character the BEST he can be… #sonicmovie #gottafixfast 🔧✌️

“Thank you for the support. And the criticism,” Jeff wrote at the time. “The message is loud and clear… you aren’t happy with the design & you want changes. It’s going to happen. Everyone at Paramount & Sega are fully committed to making this character the BEST he can be…”

Good news for Jeff: The fans totally love Sonic’s makeover, if Twitter is any indication.

the cursed sonic walked so the new sonic could run #SonicMovie #SonicTheHedgehog pic.twitter.com/GFnwCF3eDL

The Sonic Movie summed up in two images pic.twitter.com/EpQjRt1CSM

It’s honestly insane even LOOKING at the old Sonic design, it doesn’t even feel real anymore. It’s like we all collectively had a nightmare pic.twitter.com/a3H6OtHI3p

your Instagram how you really
pics look in real life#Sonic pic.twitter.com/m9xchzRjog

A new trailer for the Sonic the Hedgehog movie just dropped and they really did fix that design. The original one was absolutely hideous and the new one is looks like the original character. It’s like a night and day comparison. Kudos to the crew for taking the time to fix it. pic.twitter.com/cC6COBMSs3

SEMrush even tracked the sentiment with data and found that 73.68% of all Sonic tweets today have been positive, so there you go Sonic, your glow-up is well appreciated!

RIP Nightmare Fuel Sonic. We hardly knew ye…and honestly that was for the best.