The male characters of the Netflix series Stranger Things are no strangers to theories about their sexuality. Since the first season, fans have caught onto slight hints and theories of Will Byer’s possibly being gay. Also, his supposed crush on another character. Stranger Things Season 4 Volume I introduced heavy rocker Eddie Munson, who is also garnering his own theories about his sexuality.

‘Stranger Things’ fans have theorized about other characters’ sexuality before

Will Byers has been the source of most LGBTQ speculations in the Netflix series. In the first season, his mother comments about classmates calling him derogatory terms and hints at him not knowing who he is yet. Over time, the theory of Will possibly being gay has gotten stronger. Fans saw this when Mike said the line, “It’s not my fault you don’t like girls.” Which was met with a palpable silence by Will.

In Stranger Things Season 4 Volume I, specific details further fueled the claims with Will’s historical figure project. Matt Duffer told TVLine, “You’re supposed to be asking those questions.” And the brothers confirm fans will get an answer in the second installment.

Fans are now putting their focus on Eddie Munson. The character is the epitome of an 80s delinquent metalhead who is a die-hard fan of Dungeons & Dragons. But a fan noticed one small detail about Eddie’s wardrobe in Stranger Things Season 4 that could allude to his sexuality. 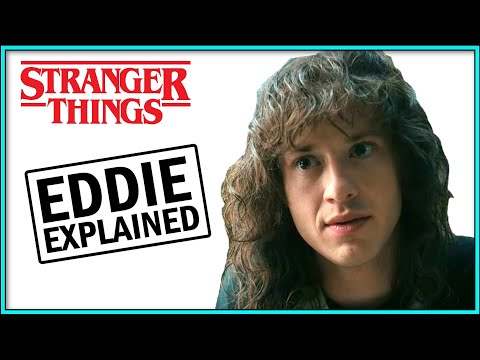 Eddie Munson looks what many fans would assume a metalhead to look like during the ‘Satanic Panic’ of the 80s. Throughout the first half of the season, he wears one main outfit—a leather jacket with a cutoff jean jacket over the top and a Hellfire Club shirt. Eddie also ties everything together with his skull rings, jewelry, and “monster” hairstyle.

But a fan on Twitter dived deeper into the possible meaning of Eddie’s black bandana/handkerchief in his back pocket. According to the fan, “We need to talk about Eddie Munson. A Black hanky = S&M peep the handcuffs on his room wall and the hanky in his back pocket which is code. In conclusion Eddie is very gay and very kinky thanks for coming to my TeD talk.”

Is it possible that Eddie’s sexuality was teased in Stranger Things Season 4? Fans certainly think so as one fan comments, “also anyone that claims its a coincidence needs to remember that a team of people deliberately make choices like this when creating costumes for characters because the way you dress can say a lot about you.” The black hanky in Eddie’s back pocket is tied to “The Hanky Code.”

The fan on Twitter included a Google search snapshot of “The Hanky Code.” It could explain the meaning behind the hanky in Eddie’s pocket and his sexuality in Stranger Things Season 4.

According to Onyx NY Northeast, “The Hanky Code is a longstanding tradition and means of communication within the LGBTQ community. It is also known as flagging. The hanky code is a color-coded system in which an individual wears a specific colored handkerchief in their back pocket(s) to inform others of their sexual interests and roles.”

Looking back at Eddie’s scene in the series, his hanky is black with a white design. According to Onyx NY Northeast’s chart, the wearers are into S&M. The use of the “The Hanky Code” emerged among LGBTQ men in the 70s into the 80s. But the code is not widely used today.

Putting all the pieces together, Eddie and Stranger Things Season 4 takes place in the 80s. The details do fit, but it is unclear if the theory is true. Also, if the Duffer brothers will reveal it in the second half of the season. Some fans are also swooning over the immense chemistry between Eddie and Chrissy in the first episode.