Strictly Come Dancing is heading to Blackpool Tower this weekend as the competition heats up. Comedian Chris Ramsey and professional dance partner Karen Hauer are going to be performing the Salsa to Uptown Funk by Mark Ronson feat. Bruno Mars. But will this be his last dance?

Funny man Chris repeatedly tells Strictly fans how surprised he is to have made it this far in the competition.

His journey so far has seen him score 13 points during week one for his Cha Cha Cha to a much more respectably 34 points for the Street/Commercial routine two weeks ago.

However, on Saturday night he is set to dance a Latin number and there is a strong chance he won’t score big and will be booted out. 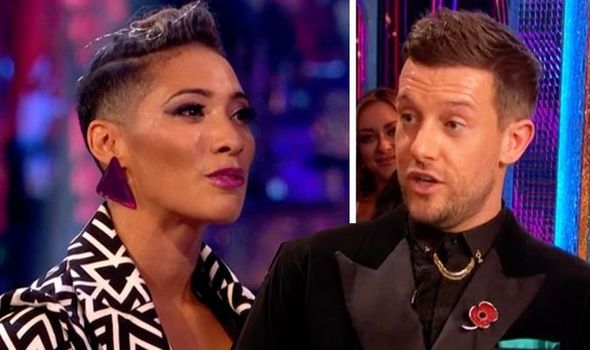 It comes as Express.co.uk has looked into the specialism of his professional partner Karen.

According to data, the Venezuelan-American’s niche is Mambo and Ballroom.

Does this mean their performance isn’t going to wow the judges?

Karen has been participating in Strictly since series ten.

Her debut saw her partnered with Nicky Byrne where they made it to week ten of the competition.

The nearest Karen has ever come to lifting the Glitterball Trophy was with Mark Wright in series 12 when they made it to the final.

But, taking a look back at all the series she has competed in and the last dances she and her celebrity performed before being eliminated, it seems Latin dances are her downfall.

Disregarding this year’s series, out of the previous seven series, four of Karen’s last dances have been Latin numbers.

Does this mean Chris’ time on the show is going to come to an end this week?

Alongside this, Chris hasn’t scored too highly for previous Latin routines.

He kicked off week one with a measly 13 points for the Cha Cha Cha, received 26 points for the Jive three weeks later, but slipped to 23 points from the judges for his Samba in week six.

Data shows the Ballroom routines he performs tend to score highly and the speciality dances, for example the Charleston or Street/Commercial score the best.

Sadly Mike Bushell won’t be heading up north to the glitz and glamour of the Blackpool Tower.

Despite this, it seems there is a treat in store for the remaining contestants.

Kate Shane, head of Merlin’s Blackpool attractions, including the Tower, told Blackpool Gazette: “The highlight each year for me after seeing the transformation of the set is watching the faces of the celebrities when they walk out onto the floor for the first time.

“Compared to Elstree Studios it’s so much bigger and it’s a sprung floor so you see the nerves set in but then you watch them dance on it for the first time and the excitement.”