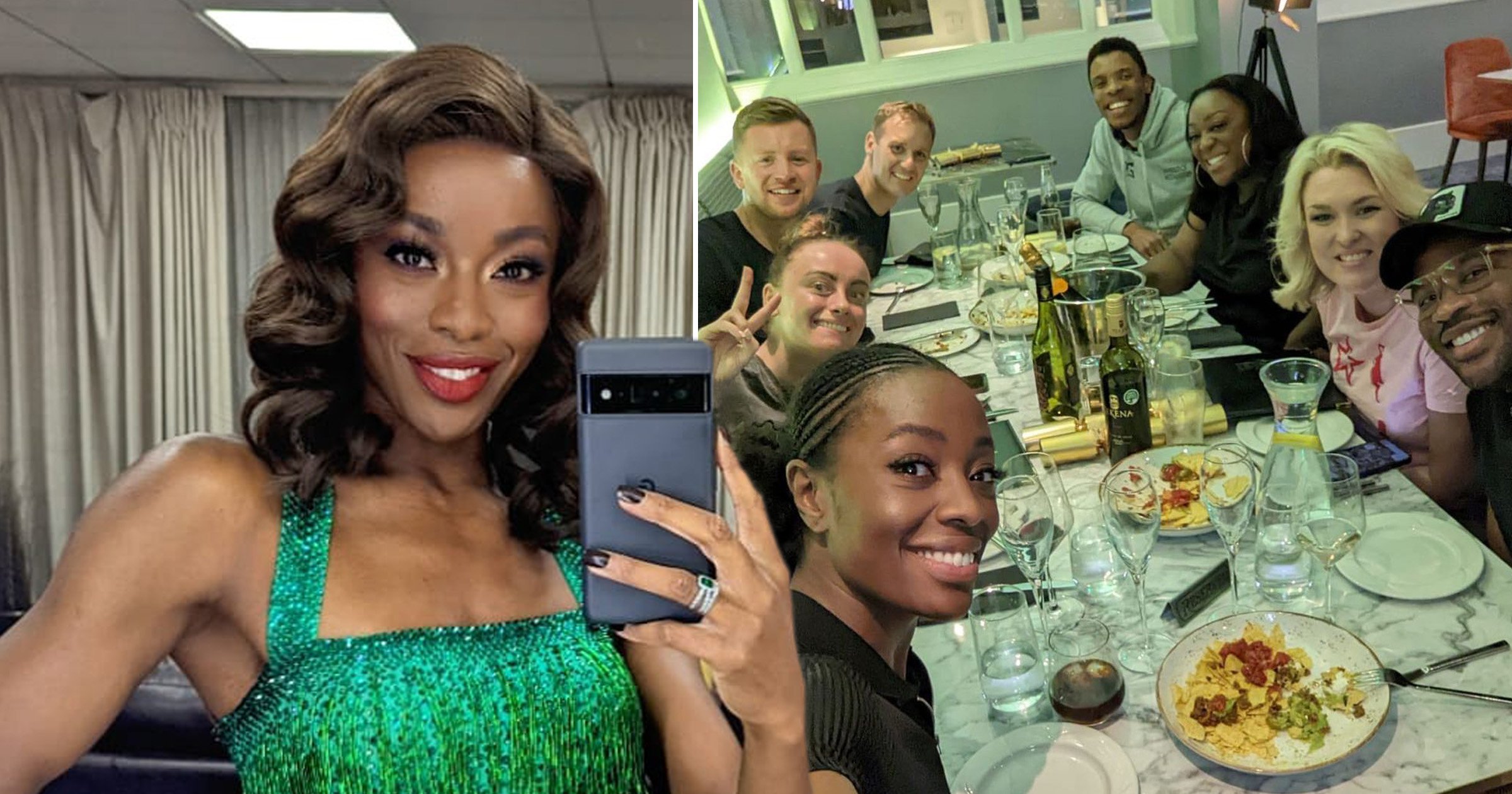 AJ Odudu has put on a strong front after revealing that she had to withdraw from the Strictly Come Dancing 2021 final, reuniting with the other contestants in a sweet selfie at dinner.

Just a day before the grand finale was due to take place, it was revealed that the TV presenter had been forced to drop out of the competition with her partner Kai Widdrington.

AJ said that she was ‘deeply upset’ by the announcement, which came after consulting with medical professionals over a torn ligament in her right ankle that she sustained during training, which left her unable to stand on her foot.

After breaking down in tears on It Takes Two with her professional dance partner, later in the evening, she and other Strictly stars from this year’s series appeared to be in high spirits as they sat down for a meal together.

There were a few absentees, including Robert Webb, who won’t be appearing in the final after withdrawing from the show on medical advice, and Tilly Ramsay, who has tested positive for Covid.

The picture, which was taken by a beaming AJ, showed Katie McGlynn, Adam Peaty, Dan Walker, Rhys Stephenson, Judi Love, Sara Davies and Ugo Monye back together again while staying in the same hotel the night before the final.

Other celebs missing from the selfie included Tom Fletcher, Greg Wise and Nina Wadia, as well as finalists Rose Ayling-Ellis and John Whaite.

Sharing the photo on Instagram, Dan wrote in his caption: ‘The night before the big one #StrictlyBubble,’ with a heart-eyes emoji.

‘‘Twas the night before the @bbcstrictly final, good people all around,’ Ugo said, while Rhys added: ‘Looking like a bunch of uni students celebrating their first Christmas together in halls.’

Dragons’ Den star Sara shared a picture on her Instagram Story of herself and Loose Women star Judi FaceTiming Tilly, as the social media influencer missed out on the fun in person.

‘We FaceTimed our Tilly so she could still partake in hotel club from isolation…’ she wrote, putting on a sad facial expression.

When news of AJ’s departure from the show emerged, she paid homage to Kai, saying in a statement: ‘Learning to dance over the last 13 weeks has been an incredible honour and to do it alongside someone as special, patient and devoted as Kai is something I’ll treasure forever.’

The pro returned the sentiments, stating: ‘I’ve been absolutely honoured to get to dance with the incredible AJ Odudu for the last few months and although neither of us wanted our journey to end this way, AJ’s health and safety are by far the most important things.’

The Strictly Come Dancing final airs tonight at 7pm on BBC One.