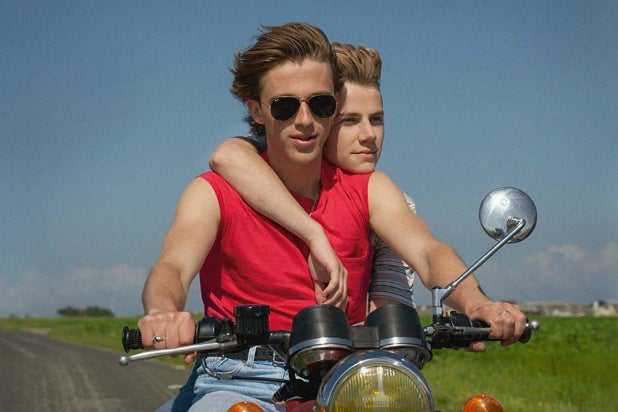 This review of “Sumer of ’85” was first published following the film’s appearance at the 2020 Toronto Film Festival.

Set in the year when writer-director François Ozon turned 18, “Summer of ’85” depicts gay adolescent romance in a sun-dappled, seaside French town. But to compare it to “Call Me by Your Name” makes about as much sense as pairing “Hiroshima, Mon Amour” with the original “Godzilla” just because they’re both about the aftermath of the atomic bomb.

Ozon, adapting the British YA novel “Dance on My Grave” by Aidan Chambers, has a rather different story to tell, and it’s one that fits with many of the director’s favorite themes, particularly the intersection of sexuality and mortality, explored in a manner that occasionally leads to pitch-black humor. It’s even peppered with visual and thematic references to earlier Ozon films, from his international hit “Swimming Pool” to his breakthrough short “A Summer Dress.”

It’s a tale told in flashback, as we open on Alexis (Félix Lefebvre, Netflix’s “The Chalet”) being hauled in for questions about the death of David (Benjamin Voisin). And as Alexis writes down the story for the authorities, he tells it to us as well: The two met when Alexis’ sailboat capsized and David rescued him. David, who’s a little older, is immediately solicitous, bringing him home for a hot bath and a meal prepared by David’s inappropriately gregarious mother (Valeria Bruni Tedeschi, “Let the Sunshine In”).

They become fast friends, and then lovers. (In the narration, Alexis tells the authorities that his sex with David is none of their business, and so a door closes, not that we don’t get plenty of indications of the passion that transpires between them.) Just as Alexis is utterly besotted, though, David shows himself to be a serial flirt, seducing British au pair Kate (Philippine Velge) right in front of Alexis. The two boys later argue, with Alexis throwing a heavy object and breaking a mirror behind David before he storms out. David chases after him on his motorcycle and gets into an accident.

It’s at this point that the story gets complicated, with David’s mother, still reeling from having recently become a widow, blaming Alexis for the death of her son. And as Alexis tries to process his grief — and to fulfill a promise he’d made to David — David’s mother grows increasingly infuriated.

“Summer of ’85” gets its 1985-ness right, from bookending the action with The Cure’s “In Between Days” to the jeans and the typewriters. And nobody since Eric Rohmer gets the joys and the agony of young love under the French summer sun as well as Ozon does, time and again; cinematographer Hichame Alaouie, working with Ozon for the first time, captures the director’s sense both of bright days that seem to stretch on to eternity and intimate spaces that become a character’s whole world.

It’s no easy task to nail Ozon’s various tones, but Lefebvre draws us into his character’s complicated journey, whether it’s the exhilaration of first love or the increasingly extreme lengths to which Alexis will go to process David’s death. The farcical nature of some of Alexis’ choices become all the funnier because of Lefebvre’s total deadpan about them.

He and Voisin generate palpable chemistry, and it’s interesting to see these two relative newcomers play off of modern legends like Bruni Tedeschi and Ozon regular Melvil Poupaud, unrecognizably nerdy as a literature professor who counsels both young men.

For as prolific a filmmaker as Ozon continues to be, his occasional misses are far outweighed by his offbeat and insightful forays, particularly in the realm of sexuality — exploring both the best parts and the crazy-making parts. For audiences equally interested in his insights about loss and about love, there’s plenty to ponder in “Summer of ’85.”